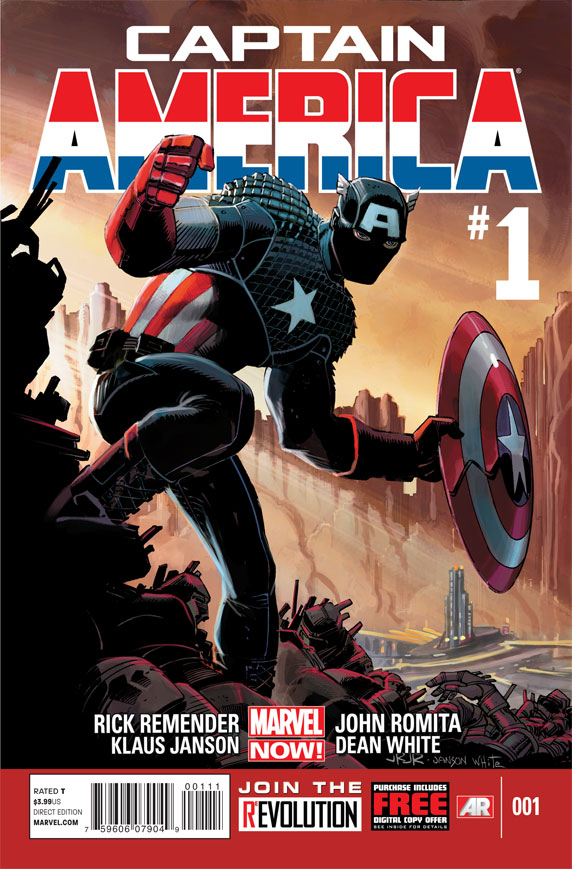 When Rick Remender announced he was taking over Captain America, more than a few eyebrows went up. Remender has spent the past few years immersing himself in the seedier, grittier sides of the Marvel Universe. Cap just seemed a little too earnest a character for the writer. However judging by this issue, it appears that Remender has been waiting for quite some time to embrace his inner wholesomeness, as in one issue, he nails Cap's voice, a skill very few writers posses (and most of them have names that rhyme with 'Trubaker').

Ever since the Avengers pulled him out of the ice, one of Cap's defining traits has been that he is a man who cannot sit still. Remender showcases this attribute by planting us firmly in the middle of a mission that could easily have been the finale to his first arc. From there he segues right into a working date with Sharon Carter, despite an injury that would have at least merited a day or two off for any other character. However here we see Cap's penchant to keep moving forward, to keep doing more good used against him, as he is ensnared in a trap by his old (and delightfully ridiculous) villain Arnim Zola, and whisked off to the bio-fanatic's home made, personal dimension of horrors.

While Cap's narration does slip into hyperbole and (for Cap) overly colorful metaphor at times, Remender really nails the drive and determination that propels Cap forward as well as that earnest grounded quality that makes Cap such a likable character under some writers, and dismissible under others. The highlight of this issue is most definitely the brutal flashback sequence where Remender begins to suss out just what makes Steve the man he is. It's a great way of adding dimension to the character and pathos to the plight he finds himself in by issue's end.

Romita Jr. is a living legend at Marvel, having tackled extensive runs on Avengers, Wolverine, and of course Amazing Spider-Man, but I don't think he has every had a lengthy run on Captain America. Remender puts him through his paces here beginning with a high stakes action sequence onboard a plane diving towards Manhatten before transitioning to the alien environment of Dimension Z. An artist as versatile and fast as Romita Jr. deserves a challenging book and given this first issue, I don't think Captain America will disappoint. I would be remiss if I did not mention his contribution to the afore praised flashback sequence wherein Romita Jr. makes the scene by detailing the brutality of the events and Steve's reaction to them.