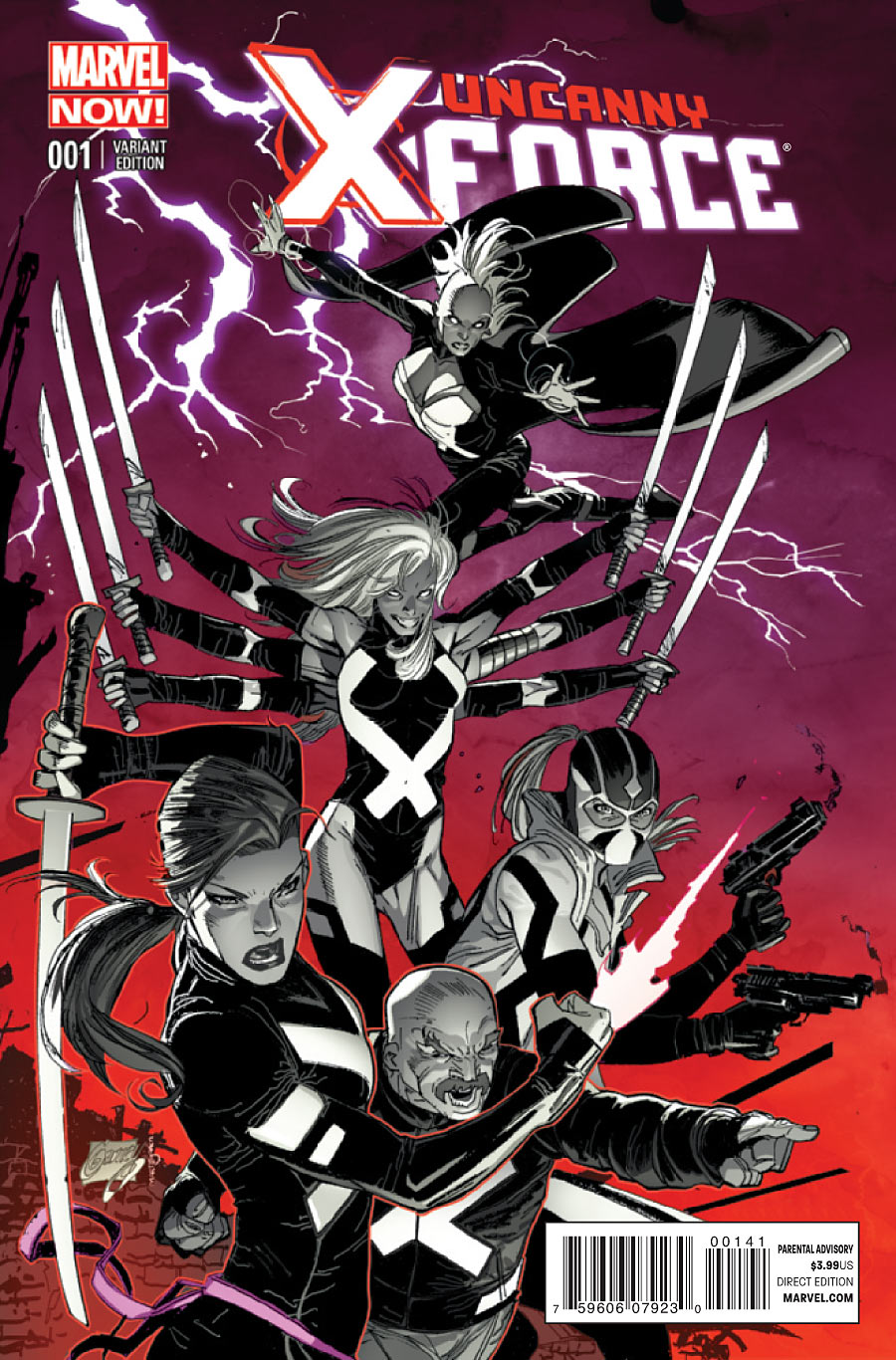 Uncanny X-Force #1 is a much more confident and polished "major league" debut for Sam Humphries than the fumbling handoff that was his inheritance of The Ultimates from Jonathan Hickman (though to be fair, train wrecks come with the territory of the long past its expiration date Ultimate Universe). Humphries has the unenviable task of following Rick Remender's tenure on this title, a run that was lauded by critics and fans alike as a bench mark for powerfully thought provoking super hero comics. And while this isn't a flawless debut issue, it is definitely a sign that Uncanny X-Force is still a title worthy of your money.

Uncanny X-Force could have just as easily been titled Psylocke and X-Force, as Betsy Braddock is undoubtedly the star of this show. Haunted by the decisions and actions of X-Force, Betsy is unable to settle into a (relatively) quieter life teaching at the Jean Grey School, so she takes Wolverine's advice to get out into the world and hit something. Along for the ride is Storm who is still processing the abrupt end of her marriage to Black Panther, and Wolverine's old Alpha Flight buddy Puck. Together they are tracking the origins of an influx of street drugs into L.A., being dealt by Spiral, an old enemy Betsy has an overwhelming urge to stab repeatedly. There is also time to check in on Fantomex's new status quo as well as reintroduce an old friend turned adversary.

Humphries doesn't quite nail all of his characters, most notably Betsy's new found affinity for cursing, but he definitely is finding his way to writing them as distinct larger than life personalities and crafts their dialogue with a certain assured flair. Where Humphries really excels is the narration captions that succinctly distill years of convoluted X history while simultaneously acknowledging the the strangeness of these characters lives, and that said strangeness has become the norm.

Ron Garney is a comics veteran whose work gets better and better with each passing year. To my mind, never before have Garney's pencils looked sharper. His style tends to feature scratchy pencil work that gives a real sense of texture to characters and surroundings, however the downside is that sometimes the art begins to look rushed when pages get busier. That is not the case in Uncanny X-Force #1 where the art looks consistently polished throughout while maintaing Garney's trademark line work. My one major critique with Garney's work on this issue is the variability of Puck's height.

The major stars of the art show however are colorists Marte Gracia with Israel Gonzalez who establish a real visual flair to the issue elevating Garney's work. The flashbacks, club scenes, and conversation pieces each get their own distinct color schemes that underscore what's happening in the script and art, while making the pages pop.

While the previous incarnation of this book focused on dark themes such as the justification of murder and the cost of escalation, the new management seems keen on making their own mark by celebrating the weirder, more eccentric side of the X books. I'm sure that I wasn't the only fan of Rick Remender's run that was ready to write off this book after he left the title. However Humphries and Garney have made a strong argument for keeping Uncanny X-Force on your pull list.