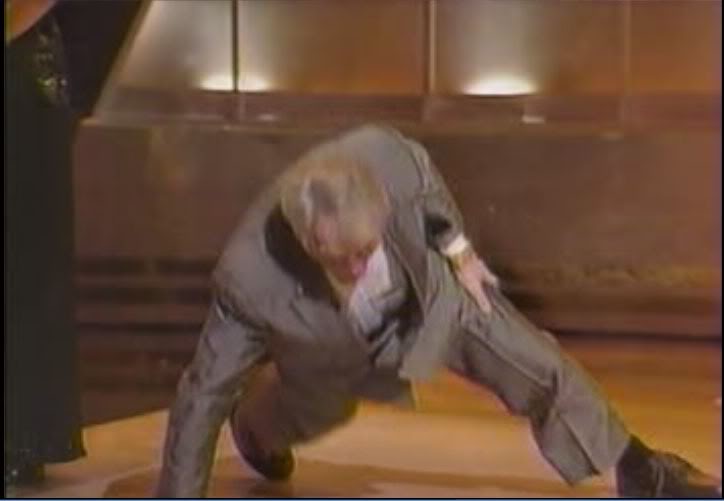 This week's question comes from Sarah, who asks: Awards season is upon us and I LOVE IT! But there are some tweaks I would make to maximize my enjoyment. Is there a certain something at a specific awards show (or process leading up to said show) that you would change? If not, do you have any general suggestions?

There are near infinite things I would consider changing about the awards process, from how nominees are selected to who votes on the final winners, from how awards dictate release schedules so that there are roughly 1,000,000,000 movies I want to see coming out in December and Hansel and Gretel: Witch Hunters looks like my only option come January to the way that victory connotes more prestige than a simple nomination. Hell, I've previously discussed the idea of doing away with awards in general out of the high-minded opinion that maybe art doesn't need to be quantified in terms of "best."

But instead of calling for the radical overhaul of the entire awards system in this space, I want to tweak something much smaller that has annoyed me in recent years. I want to cut out, or drastically decrease the length of, acceptance speeches, replacing them with longer and more clips from the nominated films and performances. I don't deny that there are great acceptance speeches, and that Jack Palance doing push-ups, Sally Field saying "You like me. You really like me," or Adrien Brody kissing Halle Berry aren't great, memorable moments from Oscar history.

But for every phenomenal speech, great one liner, or indelible moment, there are 30 or 40 laundry lists where the recipients thank a faceless mass of people that matter greatly to them and not at all to me or you. Instead of this, I advocate for returning to an era where nominations were accompanied with a short clip of the work being nominated. Not only does it expose people, even briefly, to art they may have missed, it also allows for viewers to play along at home, even if they haven't seen any of the nominated works. If it makes you happy, I say let's allow the recipients to give speeches backstage that will be filmed and put up online, so that some of those great moments can be preserved (even if the fact that they are on stage is likely the precipitating event for a lot of them). But if award shows are meant to honor art as much as artists, I would like to see a stronger emphasis on the former, which in its own way, should gratify the latter as well. That, or I get to stuff the Oscar envelopes myself.

I am a total sucker for award shows. I love the glitz and the glam, all of the power sitting in one room. I root for every winner and feel the pain of every disappointed nominee. But despite my love affair with awards season, the past twenty years have had a dark cloud hanging over their head: namely, the dismissal of Leonardo di Caprio and his amazing work.

In my opinion, Leo has kicked ass in every role he has played, yet he continues to be shut out from the Oscars as well as many other award shows (a full list of this indignity can be assessed on his IMDB page). Not nominating Leo for Best Supporting Actor this year was the last straw. In Django Unchained, (in my opinion) the most over the top, yet still the best, Tarantino movie to date, Leo crushed the role of the sociopathic francophile Monsieur Candie. He is the owner of the largest and most notorious plantation in the antebellum south. I thought he gave one of his best performances to date. He was cold, merciless, manipulative, egotistical, and a complete nut job. I despised every word out of his mouth and every gesture he made; yet couldn't help but love the glee and joy with which he doled out gifts and punishment to his family, staff, and slaves. Simply put, it was an electric performance I could not stop watching.

Leo's co-star, Christoph Waltz, is nominated for Best Supporting Actor for his role as the bounty hunter Dr. Schultz. Waltz gave a great performance, too (and has the Golden Globe to prove it). But, in my opinion, Dr. Schultz was no Monsieur Candie.

If you're reading this, Leo, keep your chin up! Maybe the Academy, HFPA, and every other award season voting organization is waiting to give you ALL your overdue statues when they give you a lifetime achievement award!

This is easy: I would make the men and the women all have to wear ballgowns. Because the fashion is my favorite part, and we're currently missing out by having half of the population wear suits. Sparkles and sequins for everyone!!!


Chris
To steal a quote from Ron Swanson: "Award shows are stupid. But if the awards went to the right people, maybe they'd be less stupid." I also echo Jordan's wish that awards season didn't necessitate backloading the year full of all of the movies I want to see. But seeing as those are bigger flaws with the system that we talk about pretty much every time an awards show rolls around, I will focus on advocating a small change that would make these shows infinitely more watchable: All the nominees get drunk beforehand. And I mean really, really, really drunk. Like 21st birthday and you know all the bartenders kind of drunk. Now that would be quality TV.

End them. OK, so maybe that's wishful thinking. Assuming that I don't have the magical power to just rid the world of pointless, self-promoting award shows, I'd try to revise the voting system. People who vote in a category would be FORCED to see all the nominees. Ideally, those choosing the nominations would see a very large group of films, but it's impossible to regulate that, given just how many movies come out a year. I know for a fact that most Oscar voters don't get around to seeing everything -- which underscores how unbelievably stupid these fucking awards are. My dad recently told me a story about how he lived next door to an Oscar voter. The voter worked as an industrial film maker (literally movies for factories and shit). His voting process would be thus -- 1. Receive ballot in the mail. 2. Remove ballot from envelope. 3. Give ballot to his kids to fill out because he doesn't give a shit. 4. Return ballot for tabulation. And this is the most prestigious film award in the world. I'd imagine most voters are closer to this than a person like Jordan, who works to see each and every film nominated for something. It's a flawed system which will never be changed because in the end, it doesn't matter who wins what Oscar each year. As long as the movies, actors, directors and screenwriters all get promoted on a national stage, everyone's happy. Seriously, fuck these things. Also Waltz was better than Leo. Never have I seen Leo in a film and thought, "Let's give this walking furrowed brow an award for being better than every other actor this year." He's been good, but never great.

I agree with everyone else that the Oscars, like most award shows, suck and should be abolished in a civilized society. It's all PR bribery, politics, and laziness on the part of the voters, and has been an historically poor metric of a film's longevity or artistic importance.

That said, the number one thing I would want to change if given the chance would be the demographic makeup of the voting body. As an LA Times article pointed out last year, Oscar voters are 94% white, 77% male, and 86% are over the age of 50. No wonder their selections are typically safe, boring crowd-pleasers.

Now, to institute a demographic shift that would include more women, people of color, and people under 50, the criteria for membership in the Academy would have to change drastically. According to the Academy's website, "To qualify for membership, you must be a film artist or craftsperson working in one or more of the art form's key creative areas. And your work must represent an unusually high level of quality and distinction." I think this is too broad - no wonder the Oscars looks like an L.A.-based white male hivemind.

First, stop offering new membership in the Academy, effective immediately. I understand that this means that the organization will lose influence and money, but tough shit, we've got art to save. They can direct all of their membership dues to their educational outreach programs rather than dumping so much money into tacky primetime circlejerks every February.

Then, wait for all current Academy members to die off. This will likely take at least 40 years, possibly more, so the Oscars will continue to suck for a while, sorry everybody. Once the last decrepit Oscar voter has kicked the bucket, new members will be accepted, invite only, and the pool will be small - 10 men, 10 women, and they can't all be white and old. By 2043, I think we can safely assume that there will be a diverse group of highly accomplished filmmakers and performers to choose from. Affirmative action will do the rest.

The same formula will be used every year. Every member is guaranteed ten years of membership, after which time they retire from Academy voting. This will ensure a rotation of fresh talent, and keep out bitter old fucks.

If that doesn't work, I don't know what will. I look forward to instituting this policy when I take over the Hollywood machine in 2032.

Wow, when I asked this question I didn't think it would inspire so much passion and vitriol, which is what makes the world go round! I agree that award shows, and the Oscars especially, are out of touch and less about celebrating art than about celebrating in general. What really gets my goat is that everyone knows this and either accepts it or hates it, but no one is willing to fully exploit it. The best part of awards season is how many melodramatic bigwigs are in the same room with relative frequency and I want to see more of the good stuff.

The person who didn't cut to J-Lo when Jennifer Garner was up on stage being adorable about her husband deserves to be drawn and quartered for not showing us what could have been a priceless moment. And apparently out beloved Leo D. spent the night of the Globes being lectured about something by Julia Roberts. Why didn't we get to see that?!?!? My prayer and my plea is that this is rectified at the Oscars. If I have listen to rambling acceptance speeches, Anne Hathaway I'm looking at you, and accept the choices of boring old white guys who blew their loads all over Lincoln, then I at least want to see some of the wonderfully terse interaction between Angelina Jolie and Stacy Keibler or something equally juicy.

Note: Unfortunately, our brilliance is sometimes a finite resource. Send us your ideas for future installments of Random Pop Culture Question of the Week on twitter @reviewtobenamed (follow us here), or shoot us an e-mail at reviewtobenamed@gmail.com.
Tags:
comments powered by Disqus