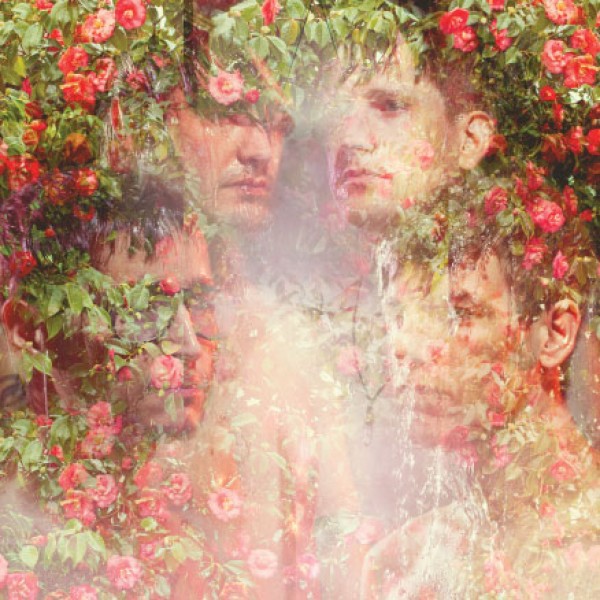 Bottom Line: Miracle Mile is a half-good stretch of psychedelic-influenced indie pop that moves away from Starfucker's over the top dance stylings.

Portland indie pop/electronica group Starfucker have always walked the line between heavy dance-beat driven music and more whimsical indie pop (a la of Montreal). Their 2008 self-titled debut was a mish-mash of indie pop jams that frequently blended into each other with simple drum beats, synth-driven melodies, and gentle vocals. It had its moments, but many tracks just seemed to be kind of quick and unmemorable pop diddlies that didn't go anywhere. Follow up album Reptilians in 2011 added a slew of dance beats and turned to the synthesizers up to 11 - so much so that much of the album sounded like it could have been a video game soundtrack. This isn't to say that it was bad though, as tracks like "Julius," "Busy Us Alive," and "Quality Time" were all great dance tunes, and in all I really liked the album and thought Starfucker could be good as a more electronic-heavy group.

Now with Miracle Mile, the beats are again toned down and the sound of the self-titled debut is back in full, albeit with a bit more psychedelia thrown in. And at 15 tracks, the album is a bit of a grab bag that expectedly will have some hits, but also seems to have an equal number of misses.

Let's start on a positive note with the hits: second track "Sazed" manages to have simple yet memorable melody, even if the only lyric I can understand is the chorus of "Gloria, oh Gloria." "MalmÃ¶" has a monotonous and repetitive synth part over a more complex bass line that makes it sound a great deal like "Medicine" from Jupiter, which is good since it's actually one of the dancier songs on the album. "Beach Monster" is a slower and more acoustic guitar driven song that's reminiscent of Panda Bear, and "Say To You," is another milder piece that echoes the cutesy "Rawnald Gregory Erickson the Second" from their debut. "Atlantis" is another straightforward indie pop tune, and "Leave It All Behind" is one of the more energetic songs with a jarring dance beat and 80s synth melody. Lastly, the second-to-last track "Golden Light" has a funky bass part and a somewhat downer feel to it with the repeated lyric "fade to nothing" and "I just want it to be over," and flows right into closer "Nite Rite." This 7 minute track is one hell of a way to end the album, and consists of a simple repeated bass melody and two brief vocal parts separated by about 3 minutes of a chaotic instrumental break, making it probably the most experimental song Starfucker has made. These eight tracks all certainly work, and altogether could have been made into one really strong albeit short album.

Instead, these tracks are interspersed with filler songs that never really get off the ground. Granted, none of them are offensively bad, but they don't particularly grab your attention either. I'll admit that I fell asleep listening to this album on the bus on more than one occasion, and the fact that Starfucker's frontman Josh Hodges sounds like he was hit by a tranquilizer dart on many tracks didn't help. Opener and single "While I'm Alive" must have been meant to pay homage to Bee Gee's "Stayin' Alive" since its chorus is said with the same intonation and it has the same disco-guitar sound, yet it the toned down vocals are totally overshadowed by the simple synthesizer and guitar parts and the energy feels restrained. "Isea" and "YA YA YA" could have been simple psychedelic indie pop pieces, but the funky bassline and drums seem like they want to push the song in another direction. Same goes with "Fortune's Fool" and "Kahlil Gibran," which remind me of my less-favored MGMT tracks (i.e. songs from Congratulations). This 4-track slew never really takes off, after a break of good songs you return to "I Don't Want To See," which has a good instrumental part but is brought down by Hodges' drowsy vocals again. "Last Words," is the last of these half-hearted pop song attempts, with the lyric "empty wine bottles lying next to a bed/drowning out the voices that I hear in my head," maybe explaining the tranquilizer-vocal effect.

As summarized above, Miracle Mile highlights both the strengths and weaknesses of Starfucker's songwriting abilities in an eclectic 15 track showcase. They clearly excel at making synthesizer-based pop music with simple melodies most of the time, but this only seems to work when the entirety of the song's energy is put into it, including every instrument and the vocals. They also can crank out a good dance beat if they feel up to it. The subdued vocals work do work on the mellower tracks, but their attempts to mix only mildly-uptempo pop hooks with restrained vocals seem to always fall flat. All in all, hopefully Starfucker learns a lesson from Miracle Mile; if they're going to keep going with their drowsy vocals, make the melodies match or to do it the Reptilians way and make the songs so loud and over the top that no one notices.