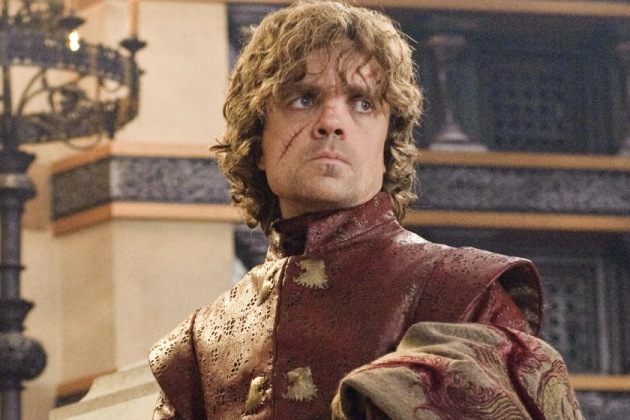 I'm ready to forgive David Benioff and D.B. Weiss for writing "Walk of Punishment" (episode 3 of this season) for good and all. This episode was so good, so well paced, and had so many great lines, I assumed Brian Cogman must have written it.

"Second Sons" is a clever episode title. It's the name of the band of sellswords headed by Mero and Daario Naharis and. . . whoever that other guy is. It's also about men overshadowed by their older brothers, through primogeniture, disappointment, or simple lack of infamy. I didn't realize it until the episode was over, but aside from Daenerys, the entire episode followed men who've spent their lives trying to live up to their older brothers, or better yet make a place for themselves outside of their brothers' shadows.

Daenerys is waging war on Yunkai, and hopes to avoid having to battle one of the "Free Companies," the Second Sons. Daario Naharis, her one sort-of-friend in this bunch, is a major skeezoid in the books, and douche chills aside, I think they did an excellent job in bringing him to the screen. It's strange to see Dany agree to let him serve her, let alone like him, when she's been so distrustful of those around her for the last couple seasons. The weird sexual tension between the two is painful to watch, but if nothing else I do have to admit that it's relevant to the plot.

Sandor Clegane is no saint, but some of the things that are pinned on him are downright unfair. His older brother Gregor, heir of House Clegane, is a violent psychopath, renowned for his cruelty and barbarism. It's a hard legacy for a brother to inherit, where people assume he's just as bad as his brother, and lay accusations at his feet. Sandor, himself wronged by Gregor before any of this happened, subsists mostly on spite and hatred. In that, it's the perfect place for his and Arya's storylines to converge for a while. Hopefully seeing what lies down that path will temper her thirst for revenge, if only a little.

Tyrion was everything I wanted him to be. Peter Dinklage channels Bernard Black in his drunkenness, and it hits all the right notes. The show borders on being laughably heavy sometimes, and right from the beginning Tyrion has been there to lighten the mood, without making it all feel silly. He threatens to geld his nephew the king if he lays a hand on his new bride, Sansa, but minutes later makes a drunken spectacle of himself. It may be that the audience is left to wonder if he's playing a very shrewd game of insulting his nephew and covering up for it by feigning to be drunker than he is, and it may be that he's just such a clown that he really is that drunk, but I think that's selling the character short. The genius of the character Tyrion Lannister is that he's both those things, and consciously chooses neither. He really is such a drunk and he really does want to protect little Sansa, and his actions grow organically from those two things without contrivance.

Tyrion also feels like he's constantly trying to live up to his father's expectations, and no matter what he does he's a disappointment. He sees how much his father favors Jaime, and it's an impossible standard to live up to, since Jaime was born talented and handsome, whereas Tyrion needs to be exceptionally intelligent just to gain the respect of an average man. A lot of this comes out at his wedding. He wants to protect Sansa, yes, but he also has an unbelievable bitterness towards just about everyone except Jaime.

I so rarely feel any sympathy or admiration for Cersei, I'll recognize that she's having a rough go of it. The significance of her storyline in this episode can be summed up by two things: the way she interacts with Loras, and the way she interacts with Margaery. Her father made her marry Robert, by whom she was humiliated the entire time she was married to him, and now her father means to marry her off to Loras, whom they both know will have even less interest in her than Robert, and whom she will look like a fool next to. In her own way, Cersei is as desperate to live up to Jaime as Tyrion is. She's his twin sister, even older than him by a few seconds, and yet no matter what she does she isn't as respected or popular as Jaime. She herself feels like a second son, always clambering to make her father as proud of her as he is her famous warrior brother.

The second bit I like comes when Margaery tries her shtick of ingratiating herself with Cersei, but Cersei, unlike most people, both sees through Margaery's shit and refuses to put up with it. After a nice explanation of "The Rains of Castamere" that is both informative about events that have happened so far and may be important later on, she warns Margaery not to try to manipulate her as she does everyone else. I was impressed, because there isn't much to be said for Cersei a lot of the time, but one positive to her being a very powerful mad dog is that she won't be deceived easily. She comes off as a bitch because she sees everyone as the enemy, but we have to keep in mind that in King's Landing, most people are.

Stannis, for all his grandstanding as rightful king, is a second son himself. He doesn't have Robert's charisma, and while it's never said I picture him spending a lot of time ruminating on why Robert can overthrow a 300-year dynasty, but he couldn't rally enough of an army take one city. While it doesn't turn out that he actually sacrifices Gendry, how seriously he considers it shows just what lengths he's willing to go to to win the throne and gain respect (which seem to be linked in his mind).

Last of all comes Samwell Tarly. Not exactly a second son, but given that he was disinherited in favor of his little brother, he certainly fits in with the theme of the episode. In an episode where each underdog has his say, the biggest breakthrough comes from Sam, the coward who becomes the first slayer of a White Walker in two thousand years to protect a girl and her baby. It's a pretty impressive scene, and we finally learn the significance of that obsidian dagger.

I'm hesitant to give several episodes in a row such good grades, but the middle bit of this season has just been killing it. My only objections are weird out-of-character moments, but I can even let go that weird Gendry scene tonight.

-It may be a stretch, but you could argue Gendry is also a key character this episode, being a slighted son of sorts.

-Did the leech scene remind anyone else of Stand By Me? (Bonus: also a movie about a second son)

-I know Dany is a paragon of the liberated feminine potential, but I really am impressed with Michele Clapton's and the rest of the costume department's limitless supply of beautiful and inventive dresses, gowns, and getups.

-"I'm only a young girl, new to the ways of war." A refrain I hope to hear a lot from Dany as she outfoxes the stupid.

-Margaery's face listening to Cersei talk about the House Reyne of Castamere. It may be the first time she realized how many screws are loose in Cersei's head.

-We get a crash course in Westerosi wedding customs, what with the bedding and all. It's one of those little touches that I love seeing on the show.

-When Tywin first looked at Tyrion and Sansa at Tyrion's wedding, I couldn't read his face. At first I thought he was proud and smiling that his disappointing dwarf of a son managed to marry better off than could ever be expected. When Tywin does go talk to Tyrion, however, it turns out that was his angry face. I can't say enough how well Charles Dance pulls off the cold, unpredictable strategist in Tywin Lannister.

-The smile from Shae when she finds no "maiden's blood" on the sheets in the morning is so small and brief and perfect it's easy to miss.

-So many gems from Tyrion:
"Then you'll be fucking your own bride with a wooden cock."
"I am the god of tits and wine!"
"My tiny drunk cock and I have a job to do." [falls over]
"Come, wife. I vomited on a girl once in the middle of the act"”not proud of it. But, I think honesty's important between a man and wife, don't you agree? Come! I'll tell you all about it, put you in the mood."
"If my father wants someone to get fucked I know where he can start."
"And so my watch begins."