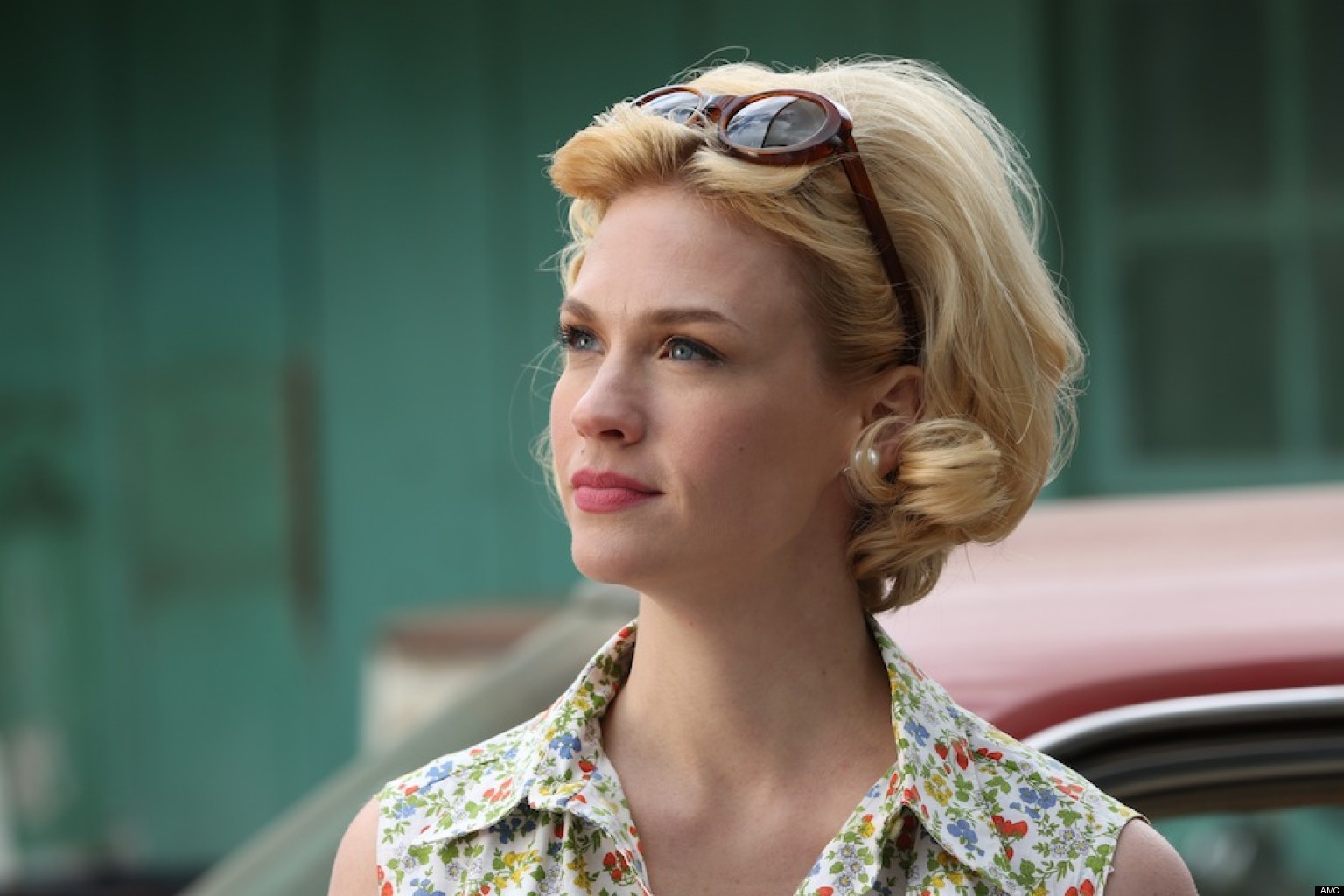 From the time I saw the title "The Better Half," it was clear Mad Men was going to be doing one of those episodes where the subtext basically becomes text for an hour. This is an episode full of dualities and conversations about different aspects of people. Its also an episode about marriage and significant others both current and former. Sure, this is an episode that literally has Megan playing twins who are "two halves of the same person" and ends with Peggy, torn between Ted and Don, searching for someone to understand her as both doors close, leaving her alone in the middle of the hall. But Mad Men is on its mid-season roll right now, and so much of tonight is done so well, its hard to begrudge it a bit of the highlighting it loves to do.

This notion of duality comes down to something pretty simple, at the end of the day: everyone contains their own worst impulses; everyone is their own evil twin. Peggy is both the progressive "pioneer" living on the Upper West Side and the terrified "reactionary" who accidentally stabs her boyfriend with a bayonet (the type of sentence I did not expect to have to write). Don is the man who seduces his ex-wife, mostly on a whim, and also the man who fundamentally wants to make his marriage work (when its convenient for him). Pete says tonight that he's being "pulled in a thousand directions at once," as if he's special for having various versions of himself vying for supremacy. Joan doesn't buy it for a second, telling him "I can't solve those problems, Pete. I have those problems." All of us have better and worse impulses, and all of us are in a daily struggle for which will win out. I may not love the way the show went into "The tooth isn't the only thing that's rotten!" mode this week, but I still respect the story it told and the theme it wanted to explore.

The show doesn't spend much time with it this week, but there's a great moment in the ongoing consideration of the similarities and differences between Don and Ted. The two are fighting over which campaign to present to margarine when Peggy stops by the meeting. Each wants to win her to their side, but only Don is petulant at her refusal to choose between the two. When he confronts her later, she says "You're the same person sometimes. The difference is he's interested in the idea, and you're interested in your idea." She thinks of Ted as a man searching for truth, a pure creative force not corrupted by vanity. Don replies, "He's interested in his idea. Don't let him fool you." While the show has painted Ted as near saintly in comparison to the rest of the cast and has been spending this season revealing Don at his worst, I'm not sure Don's response is entirely wrong. In this instance, and in the instances we've seen, Ted comes off as a good, kind, considerate, open-minded person. But Ted, too, has a dark side. He too has his vanities. And while we may respect the man for trying to keep away from Peggy, we can't forget he also kissed her despite being married. Ted looks very good at the moment, but maybe his mask is just more firmly in place. Maybe he's just been in a position to have his good side on display all this time, and if his worse half comes out, we'll see something quite different.

The Don and Betty story in "The Better Half" is a great thing to behold, as Betty reveals her great understanding of Don even as she seems to miss some fundamental truths about herself. She is back on top, feeling attractive again and getting the responses she is used to from men. We see an echo of the way she met Henry at one of his events, and its very clear that Betty loves the attention as much as she loves any man providing it to her. When she sleeps with Don, its not because he has seduced her and not because she wants him back, its an act of self-validation, of regaining the confidence she lost with her weight gain by proving the man she was married to before all that is still attracted to her. There is something refreshing about the honesty between Betty and Don in these scenes. They understand each other very well at this point, and both get something out of their dalliance without really treating it as anything more. Of course, Betty's willingness to treat it as just that gets to Don a little bit, and he finds himself staring at his ex-wife across the restaurant with new-found respect and even desire. She isn't the trophy wife he left behind, she's someone who understands him enough to know what she is doing will drive him crazy.

Peggy and Abe'a break up also brings up the idea of people in a relationship forming two halves of a whole, with the same dangerous potential repercussions as when we let our darker impulses out. Even as Peggy was infatuated with Ted, she could rely on her relationship with Abe to keep her safe from great emotional harm, until suddenly the floor fell out from under her. What I loved about this storyline is that, even as Abe breaks up with Peggy for what he sees as political differences (and what are, pretty apparently to me, "not wanting to be attacked and murdered in her own home" differences), he is revealing just how similar these two actually are. As he condemns Peggy for the way she uses her life to fuel her advertising, he draws from his own experiences to complete an article he is writing. These two always lived to work, and while I'm not particularly sad to see Abe go, I did like that aspect of their dynamic.

Roger is a man who has spent so long being defeated by his worst impulses that people have pretty much stopped trusting his better ones. We see the bad come out when Roger takes his four year old grandson to see Planet of the Apes (which is getting a lot of love this season) and his daughter basically bans him from seeing his grandson without supervision. Hurt by this, Roger immediately runs to Joan, attempting to get another young child from his bloodline back into his life, but Joan will have none of it. He may be Kevin's biological father, but Joan knows that when the chips are down Roger can't be counted on and will only confuse her son. The fact that Roger only tried to get back in with his son after being removed from contact with his grandson underlines Joan's concerns: even when Roger seems like he's trying to do the right thing, there are usually ulterior motives behind his actions. His better impulses are almost always trumped by worse ones, to the point where he really can't be trusted or relied on at all. This, I expect, is why Roger is still one of the most sympathetic characters on the show. He never quite understands why people don't trust him or why they can't rely on him. He is ruled by his baser impulses, but he doesn't seem to understand why people don't think he has better intentions.

At work, we see Peggy's best intentions at play as she tries to find a mid-point between Ted and Don's polarized campaigns, and again her worst as she tries to get a reaction from Ted to the news of her break up that he has already told her he won't give. We also see Pete trying desperately to be his best, attempting to be a part of the margarine meeting even as its clear to everyone, including the largely silent Harry, the realy fight is between Ted and Don. Yet we also see him as his worst, as he meets with Duck Phillips (Duck Phillips!) and considers abandoning the agency entirely. Duck tells Pete all that matters is family, which is especially funny coming from a man who has lost his family (and sent his dog out into the mean streets of the city). The answer sounds pat because it is. We know family can't solve the problems of these characters, it can only mask them for a while until the facade begins to decay. People are in constant war with their worse impulses, struggling to be the better half, or to be worthy of the person their with. No one is, though, not permanently, and despite their best efforts, the darkness will come for all these characters again, and their darker sides will run free once again.

-"I'll look at it very carefully and then I'll form an educated opinion. That's what professionals do."

-Don actually singing "Father Abraham," hand movements and all, was a highlight of the episode for me, and a moment where the show underlined that, yes, sometimes better impulses win out. Don is deeply skeptical of the whole thing, but he loves his kid (now), and so he does the little dance with him.

-"I love the way you look at me when you're like this. But then I watch it decay. I can only hold your attention for so long."

-"Just because you climb a mountain doesn't mean you love it."

-"That poor girl. She doesn't know that loving you is the worst way to get to you."

-"I don't know why I thought you'd be braver...you're in advertising."

-On the next Mad Men: Roger leaves the room.
Tags: Mad Men
comments powered by Disqus