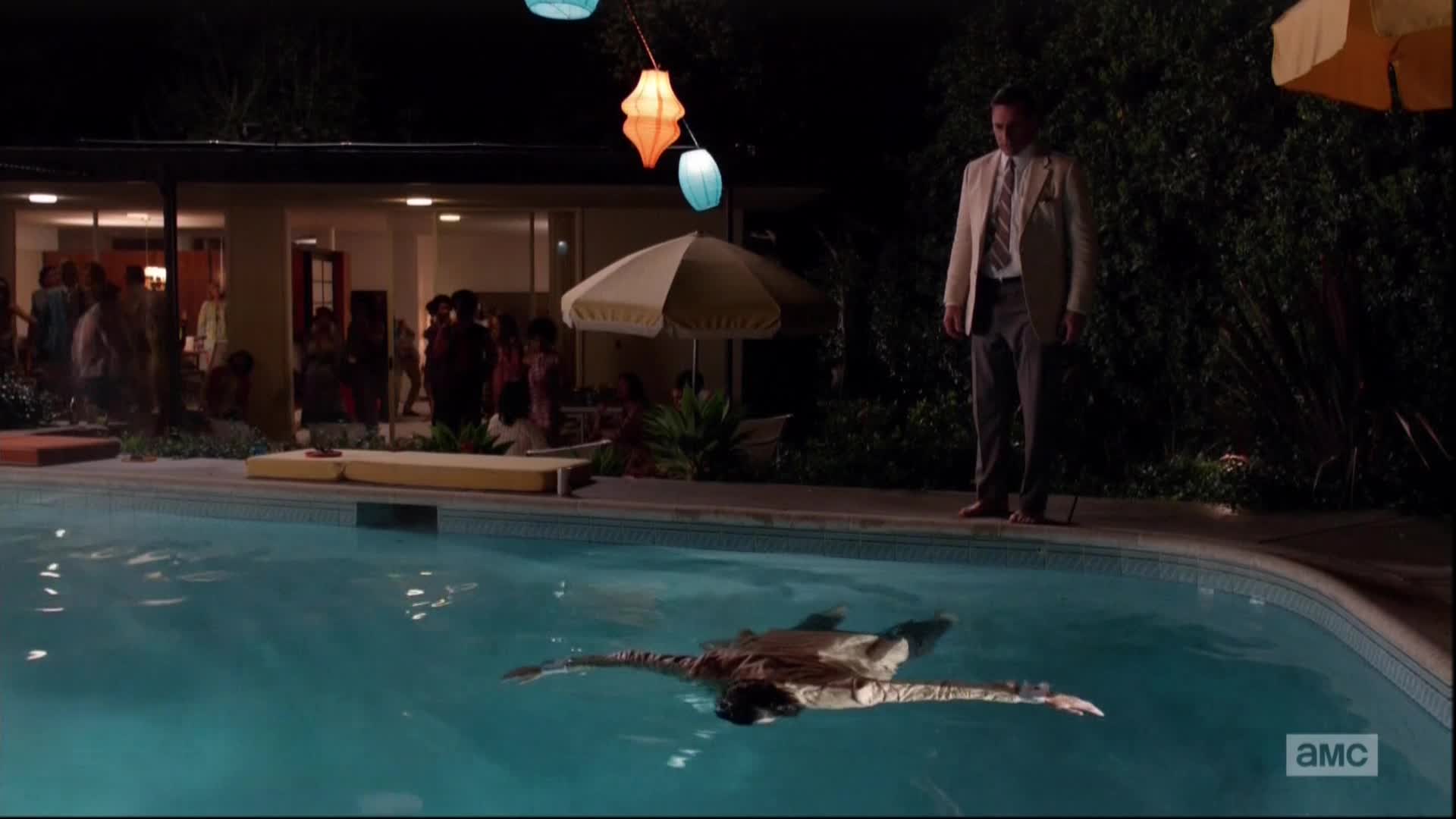 Mad Men's transition from being a show about the '60s to being a show about the '60s was always going to be a tough line to walk, I imagine. The decade has always been most associated with the social and cultural upheaval that marked its last years, but the show is much more interested in depicting the flow of history than in highlighting its most colorful moments. The hippie movement that swept the nation in 1968 has been depicted countless times in pop culture, both at the time it was occurring and in the decades since. It is pretty much impossible to have a tie-dye wearing peacenik onscreen anymore without eliciting some eye rolls and claims of cliche. For this reason, and a few others we'll get to, I expect "A Tale of Two Cities" will be a somewhat polarizing episode of the show, in a season that is also shaping up to be a bit polarizing. This was in some sense inevitable, both because it follows on the heels of Mad Men's greatest season and because it is depicting a period that has become well ingrained in our cultural consciousness. I am quite enjoying this season, and found "A Tale of Two Cities" to be a quietly excellent hour of television, even at its most ostentatious.

And we should start there, I imagine, because Don's trip at that party in California is likely to cause the most digital ink to be spilled this week. I've said before (and with increasing frequency this season) that the show has a lot in common with The Sopranos, but never has its surrealism been more indebted to that former show than here. If I were to find out David Chase directed this episode (which is credited to, and actually directed by, John Slattery), it wouldn't surprise me even remotely. The way the "dream sequence" (which is what I'll call it, for convenience's sake) plays out, with its off-kilter logic, spoken profundities both subtle and blazingly obvious, and touches of darkness lurking just off the edges feels like any number of Tony Soprano's dreams over the course of that show, and while the soldier from the premiere's admonition to Don (quoted below) felt closer to last season's "the tooth's not the only thing that's rotten" moment, it worked better for me because of the way it was framed and delivered. It was less a comment on Don's stained soul than a reminder of his mortality, and the eeriness more than made up for the obviousness.

While I enjoyed the soldier, Megan's appearance was the highlight for me. The moment Jessica Pare appeared at that party, I knew intellectually Don was dreaming (or tripping or what have you), and the show knew that I knew. There's a completely ethereal feeling to the whole proceedings, but the way Pare and Jon Hamm play the scene makes it wonderful, and captures some of the feeling of the late '60s in ways seeing that Danny (Danny Strong again!) as a hippie never really could. Of course Megan Draper wouldn't be ok with Don kissing another woman; of course she hasn't moved out to California, and she absolutely isn't pregnant. But each of these things, and the way she seems so nonchalant about all of them, do feel of a piece with this particular moment in history, and the look on Don's face tells you this is his fantasy of what 1968 could mean for him, if he let himself be swept up in it. Of course, his blissed-out state doesn't last for long, as even at his most settled, Don is always aware of the darkness lurking in the corner of his eye, and soon he is pulled viscerally back from the edge. Earlier this season (as the "previously on" segment helpfully reminded us) Don pointed out that the concept of heaven is morbid, because to get there something horrible has to happen to you. That something horrible almost happened to him tonight, and he walks through the rest of the episode like he can't quite shake the feeling of that paradise he was pulled back from because it didn't.

Meanwhile, in New York, everyone is getting their scheme on. Ted and Jim Cutler are quietly maneuvering themselves into positions of power at the new firm, and solidifying them without objections by making the illusory concession of allowing their names to be dropped from the firm (which we can now officially call Sterling Cooper and Partners, or SC&P for short). The episode has a lot of fun with the fact that Pete is right to be panicking about the ways in which the ground is shifting under the partners who used to form SCDP, as this show tends to have fun with how often Pete is right. He sees the danger of allowing Ted and Jim to increase their power, but like a whiny, spineless, rat-faced Cassandra, no one is too interested in listening to him because, well, he's Pete. And so he's left getting high on Stan's cigarette and watching the world slow to a crawl around him. Pete knows the score. He sees the way things are headed. But he'll never heed Don's advice about getting out of the firm if he doesn't like the new direction. Pete Campbell is great at digging holes, and great at shouting about how deep he's managed to dig. He's just never been very good at finding a way out.

Joan, on the other hand, is on a mission to make herself known tonight, as she stumbles into a position where she may be of more use in the new firm than anyone, including herself, ever expected. She goes on what she assumes is a date only to find out its actually a business dinner with the marketing director for Avon, who is searching for a new firm. Joan is at first completely unsure of how to hook a client, but she acquits herself well (because she is fucking Joan, and she can get shit done) and seems on the road to signing the client. She recognizes an opportunity when it knocks, and refuses to let it slip through her fingers. She goes to Peggy to ask how to proceed (knowing that Don, who would back her, is out of town), and when Peggy's advice to go to Ted goes awry, Joan is perfectly willing to ignore Ted's directive to involve Pete and just do the damn thing herself. With some help from Peggy and a well-timed white lie, Joan finds herself in charge of a huge account (or, rather, a huge potential account).

"A Tale of Two Cities" escalates a lot of things this season of Mad Men has been hinting at, in terms of social change, and I expect this may hurt its reputation in the short run. For some, this episode may be "the one with all the hippie stuff" or the episode with Don's weird drug trip. For me, it simply brings to the forefront a lot of the things that have been bubbling beneath the surface of this entire season. Ginsberg's nervousness that he is aligned with "the man," Cutler's fury at him, all of the Hollywood hippies, and Joan's increasing prominence all tie in to one simple idea that the show has to wrestle with at this point: The times, they are a-changin'. Some of these beats may not have worked for some of you, but I imagine that's inevitable. The show is in well-tread territory now, and it is hard to find an original way to tackle this particular period. I can't say "A Tale of Two Cities" blows the door off the place in terms of its original depiction of hippie culture in California in 1968, but I think it handles it quite well, in a way that feels realistic and in tune with the world of the show and the characters who inhabit it. Of course Don goes off and gets high, and obviously Roger tries to bang a hippie using all of the wrong lines to get the job done. Its in these moments, these elegant character beats, that the episode manages to ground all of its trappings in something real. Its in that second when Don wakes up, sopping wet and coughing by the pool, when his dream of escape recedes instantly from view and reality comes back into focus. Its in that moment where the episode's title is laid bare, when Roger argues that New York is the center of the universe, and Don bemoans the fact that he used to feel better in California (that he used to be able to escape reality more completely), used to, but can't anymore. The country around them is under a spell, drifting blissfully on a wave of drugs through a tumultuous period of change. But for Don and Roger, the spell is already broken, and they find themselves, as the dream fades from memory, in a far harsher reality than they might like. They've been riding high for quite some time, but after a trip like this, the come down won't be pretty. These two, and really, all of these characters, are in for quite a rude awakening. But first, maybe, they'll make like Pete and hit the snooze button, even if only for a few fleeting minutes.

-I know everyone has a Bob Benson theory, and I know this isn't an original one, but for what its worth, here's my thought for the moment: Bob is doing basically exactly what Don did to get his job at Sterling Cooper. He just showed up one day and started working. This explains why no one knows who he is, and makes sense of some of the ways he has integrated himself into the office. Plus, its more realistic than the people claiming Bob is a serial killer or a government spy.

-"If it puts the matter to rest, I will gladly put my name to rest along with the other deceased parties in this conversation."

-"So I'm a fascist because I gave you a deadline?"

-"I'm part of the problem! 'Now I have become death, destroyer of worlds!'"

-"You look familiar." "You'll have to do better than that."

-"If times get tough, I'm gonna look you up, Donny. I dig jingles, and I hear the bread's out of sight."

-"Dying doesn't make you whole. You should see what you look like."

-"I don't know what happened. I usually feel better out there."

-"They don't understand what we do." "Or they understand it thoroughly."

-"Isn't the point that Avon's happy?" "Oh, I bet you're making him very happy." "Because its better than being screwed by you!"

-"This is not the same business anymore!" "If you don't like it, maybe its time to get out of the business."

-On the next Mad Men: Megan is sort of surprised by something.
Tags: Mad Men
comments powered by Disqus