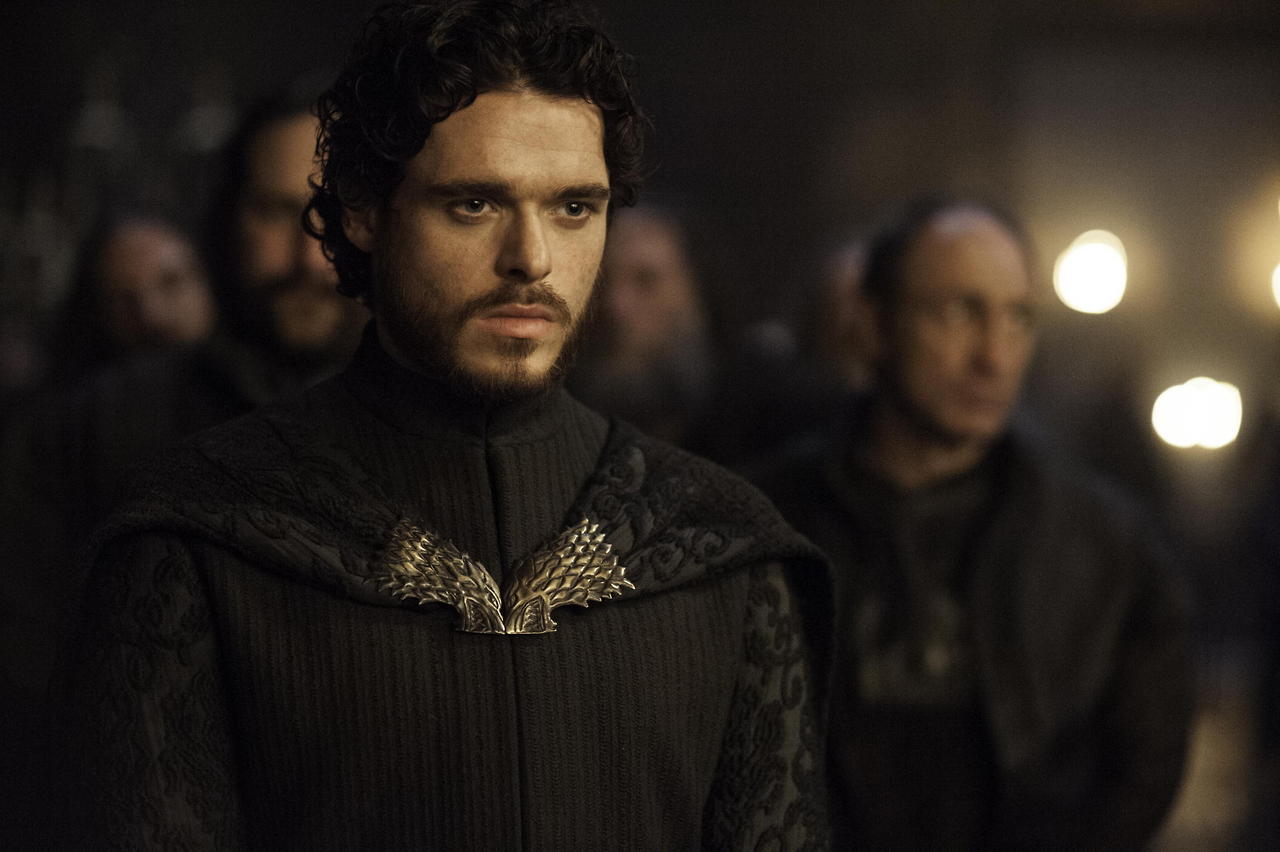 It's cruel when two characters are so close to each other, and yet never meet. Whether Jon and Bran, or Arya and her family, it's difficult to watch when they're so close.

FORESHADOW: The weird abrupt smash cut to another scene after Walder Frey talks about "putting this mess behind us."

Bran almost sees Jon this week (well, he does, through Summer's eyes). It's a running theme that none of the Stark kids ever seem to see each other after separating. Every time a reunion comes close, it's averted one way or another. I'm interested to hear more about wargs. I keep hoping either Jojen and Meera will tell Bran more about the past, or he'll see it through his green dreams. The season finale next week seems like a good place to put some of that. Also, Rickon finally has a few lines, but then he has to leave with Osha because of plot devices or something.

Jon's storyline was important, but I don't have too much to say about it stylistically. He decides that he can't kill an innocent person after all, even to continue to pretend to be a wildling. He gets in a little fight during which he kills Orell and gets his face cut up conveniently attractively. I was disappointed to see that, as they've been doing, instead of Ygritte being cruel and practical, they made her sweet and stick up for Jon again. I did feel for her when she saw Jon running away from them, from her. Her expression was an amazing mix of anger and betrayal. I don't know what to think about Tormund, though. He's either angry or laughing. If he was just angry all the time, that's kind of lame but fine. If he was jolly all the time, that's great and a great characterization. A mix would be okay, but instead of being a combination, he's just back and forth like he's bipolar.

FORESHADOW: Okay I now Roose Bolton is lurking around Edmure's wedding out of nowhere.

I'm not sure if it's because Daenerys Targaryen as a character is larger than life, or if Emilia Clarke has a great screen presence, or if it's just the way the story's written, but whenever the story follows her plotline, it's always about her. I was pleased to see that although the episode has a few scenes regarding her, she's sort of the background character in her own story. Jorah, for all his importance to the story, doesn't often get to go off on his own, and to see him go off to fight a mass of men with only Daario and Grey Worm to back him up feels like finally letting his character breathe a little, instead of just creeping two steps behind Dany all the time. Now all I want is for Barristan to tell some tales from the good old days in Westeros, a function that Jorah has served most of the time thus far.

FORESHADOW: Arya's scene with Sandor leads into one of Bran's scenes, where it's raining. However, we hear the first clap of thunder from Bran's scene while we still see Arya looking out at the Twins.

I wasn't quite sure how to read Arya's storyline this week, though that may be intentional. Looking at it from one way, it seems like finding herself defending some pig farmer and being called too kind by the Hound might illustrate that however much hatred is inside of her, she's still worlds better than some of the more ruthless characters in this world. The other way it might be taken is that it's made clear to Arya that she's not the coldblooded killer she wants to be, not yet. There's something left inside her that she has to kill. Who knows, maybe this is the beginning of some development inside of Sandor as well. In any average week, this would be all the character development I expect in one episode.

And then came the wedding.

If you're reading this, you've seen it. We could talk all day about what the saddest or most heartbreaking moment was. I loved the way they did the music, where the musicians were in the gallery above. I also thought Michelle Fairley and Richard Madden had some great acting, and I usually don't care for their scenes at all. You really feel for Catelyn as she sees what she believes is her last living child killed in front of her.

I think it speaks to the overarching theme of revenge and its consequences in the series. This is the Frey's retaliation for being snubbed by Robb when he married Talisa instead of a Frey girl. Even if the wedding went as expected, it was only so that they would have the force necessary to conquer Casterly Rock, which in turn they're doing in a war that started because Joffrey murdered Eddard. "Show them how it feels to lose what they love," Catelyn tells Robb. It goes on and on and on. Borne back ceaselessly into the past, so to speak.

What irks me is that the producers, David and Dan, have been talking since season 1 about how this is the episode they were excited to get to. I thought they would have spent the time and money to do it right. I know budgets are what they are, and each episode already costs in the neighborhood of four million dollars, but these scenes made it look like Robb and fifteen of his men were killed, instead of thousands. I also would have liked to see Grey Wind do more than be locked in a barn and shot. Look HBO, make a kickstarter. I promise the fans will put up the money to do things right.

All in all, not a bad episode. A few good moments, and smallish scale aside the last ten minutes were beautifully traumatizing. I think my big disappointments come when I expect too much from the big moments. In such a great show, I always want the key scenes to be even greater, and always perfect, which is a fault in me as the viewer more than anything.

-Dany just met Daario last week, and she's already concerned for his safety? I swear her plot used to have a lot more subtlety.

-"Yer a wizard, Sam." Little Sam scene that didn't seem to serve much purpose besides letting us know where they were heading to get to the other side of the Wall.

-I whimpered out loud when Talisa says she wants to name the baby Eddard. YOU'RE TEARING ME APART, TALISA.

-The dawning on Catelyn's face when she heard The Rains of Castamere being played was just priceless. Now if they had just played it over the scene instead of before, I think it would have been much more powerful.

-When Arya sees the northmen at the wedding and thinks she's going home, the look on her face makes her look more like a child than she has since the beginning of the show. Heartbreaking.

-Am I the only person who would have liked to see more flourish as Roose stabs Robb through the heart with a sword, rather than passing by and shanking him like they're in prison?

-After such a chilling scene, absolute silence over the credits after Catelyn falls down was an incredibly right decision.