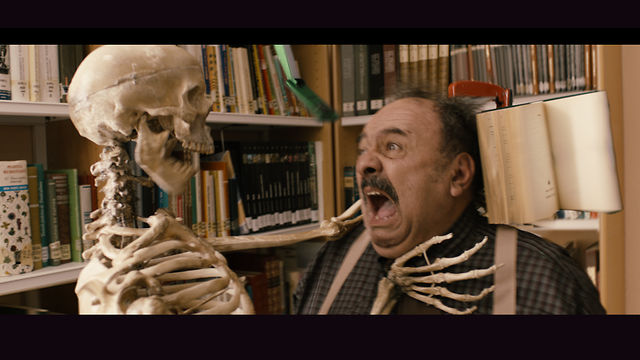 Like a pastiche of The Breakfast Club and Casper, Ghost Graduation is a blast, brisk, bright, and funny enough to get around the fact that it is mostly reworking '80s teen movie cliches. The film follows a teacher (Raul Arevalo) who can see dead people as he tries to help five high school students killed in a fire in the '80s to graduate so they can move on. THe film feels like writer-director Javier Ruiz Caldera didn't completely think through his premise (for example, the ghosts have been hanging around the school since the '80s but seem oblivious to changes in pop culture, and often feel like they have actually done nothing but wait for this narrative to pick up), but there are enough clever ideas here (like one of the ghosts dying while drunk and keeping his buzz) to make it easy to overlook some of the rough spots.

The movie could certainly be better thought out, but its about as fun as it can be, delivering classic story beats in a way that feels comfortable rather than lazy and coming up with enough tweaks to keep the whole thing fresh. If you've seen any '80s movies or ghost comedies before, you've seen pretty much what the movie has to offer, but it repackages and delivers everything so adeptly, its a pleasure to behold.