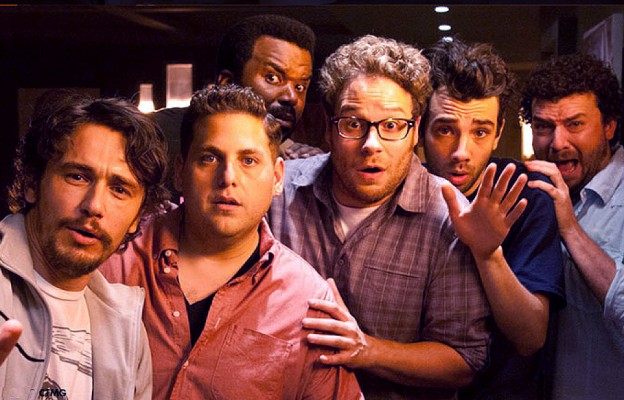 In a lot of ways, This Is The End is exactly what you'd expect. Written and directed by Seth Rogen and Evan Goldberg (the team behind The Green Hornet and Superbad), it feels like the culmination of the last decade of its stars' careers. Every celebrity in the movie plays themselves, and each character is a rough riff on where these actors have been before. The performances that work better (like Jonah Hill's) are those that twist their established type a bit to find a new comedic wave to vibrate on, but for the most part, this is a movie made for fans of its cast and the type of comedy they have made famous.

For long stretches, the film is the funniest of the year so far. An early scene that is basically a parade of cameos manages to find at least one laugh for everyone (and many for Michael Cera, doing the sort of "playing against type" role that virtually guarantees at least a few chuckles), and when the film becomes a story of six self-centered celebrities (Rogen, Jay Baruchel, James Franco, Jonah Hill, Craig Robinson and Danny McBride) trying to survive and stave off the apocalypse inside James Franco's palatial estate, it keeps the laughs coming quickly, and varies the comedic thrust of the jokes enough that there's something here for fans of pretty much all comedic styles (so long as they fit comfortably in the Apatow mold). These actors have incredible chemistry, built off of years of friendships, and the way they tweak their well-known personalities can be a blast to watch. They collide in interesting and unexpected ways, and sometimes they bounce off each other in exactly the way you expect, but bring such verve to it that the joke lands anyway.

What works less well is the film's broader satirical take on Hollywood ego-centrism. Its an obvious joke, and the film returns to the well far too often and with very little variability. The gag is the bedrock of the film's premise (the idea being it takes a literal apocalypse to make these people look beyond their own noses), but This Is The End never finds anywhere to go with it beyond the obvious. This leads to a third act that just doesn't work; when the gang leaves James Franco's house, what follows is a series of scenes where the jokes don't really work (with the possible exception of a cameo engineered to be a big laugh line that fell a bit flat for me) and the film tries to put these characters in positions that allow for real growth. The way the movie resolves is a bit reminiscent of Monty Python and the Holy Grail, not in plot, but in the sense that the writers ran out of ideas and just decided to do this.

Similarly, the film has a sub-Apatowian obsession with the scatological that starts off as a bit grating and builds to a crescendo of eye rolls. It wouldn't be a movie with these actors without a liberal smattering of dick jokes, but the ones here have diminishing returns, from a Rosemary's Baby parody that isn't as funny as it thinks (and involves a needlessly throbbing erection, because penises sure are funny) to a large scale castration that seems intended to add a laugh line to the climax, but just feels like the script read "[insert dick joke here]." While the former leads to an actually funny riff on The Exorcist, the latter is just flaccid. The film also seems generally at a loss as to how to handle the very few female characters we see. Emma Watson stops by, and mileage may vary on what results. I found the scene fairly clever, but it wouldn't surprise me to discover a lot of people were offended by it. There's also a bit of discomfort in the film's final scene, which seems to imply salvation for these men will inevitably involve a certain amount of subjugation for the women around them. Its a small moment on the screen, but one that stuck with me as I walked out of the theater. This Is The End is a very funny movie, and when it works, it delivers pretty much exactly what fans will be looking for (and in spades. When it's on, this is the funniest movie of the year so far). But when certain jokes fall flat, it instilled in me a nagging question none of the previous comedies of arrested development this crew has made ever forced me to consider: What will these people's careers look like in 20 years? I'm in no hurry to see any of them "grow up," to be sure (and one of the film's richest gags involves Jonah Hill's Oscar nomination), but if this is the end of a few of their more juvenile predilections, I wouldn't be heard to complain.