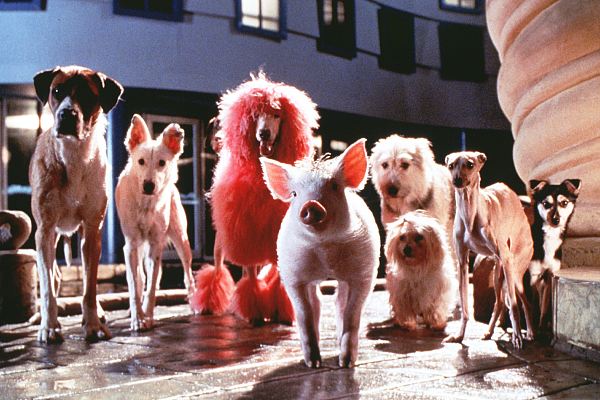 At one point during Babe: Pig in the City, a chorus of animals joins the winsome swine in singing the theme to the first film. One of them, a goldfish, does a rendition that sounds more like sarcastic derision than a loving homage to the original score. For many, this moment sums up the sequel, which is widely seen as a dark, needlessly bleak film that spits in the eye of the benignly beautiful original.

In some ways, the film's critics are right. This is an especially dark children's film, full of grievous bodily injury, poverty, starvation, and cynicism. Yet bleak is never the right word to describe it. This is still a children's movie (and while there is a death, and more stressful plot points than most modern kid's movies, it never gets too dark for a child, to my eye), and its still mostly a film about how being polite, kind, and caring will win the day. Babe is out of place in the metropolis (which beautifully combines landmarks from all over the world), and the film feels similarly disjointed from the original, not always for the worse, but rarely for the better. The comedy here, such as it can be called that, rarely elicits laughs (more gentle smiles), and there's a Rube Goldberg-ian calculation behind every set-piece and pratfall, which takes much of the silliness out of them. It feels as if the film is trying too hard to be as effortlessly enjoyable as its predecessor.

That prior film does win this one much of its emotional heft. I haven't watched Babe in years, but seeing James Cromwell standing by that pig and hearing the score played by a big band gave me goosebumps, and while much of the film around him is dark and off-the-mark, Babe is still adorably unassuming and surprisingly triumphant. Babe: Pig in the City is hardly a worthy follow up to its predecessor, but it made me smile nearly as often as I cringed or felt my heart break. It's a garish, slapstick-y, overly stylized follow-up, but the film has its heart in the right place, and as its hero teaches us, that's often enough.