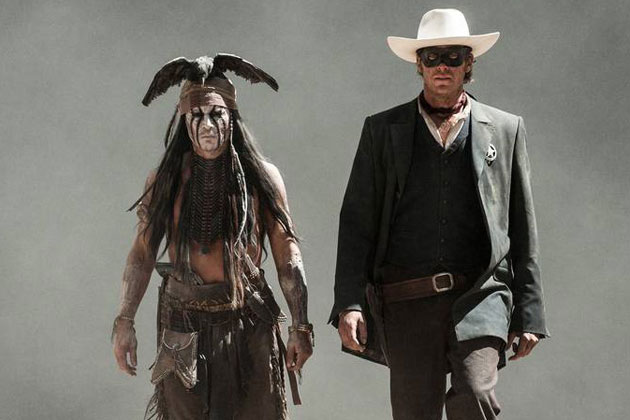 In film (and in history), the West is a place where life is cheap, justice is disregarded, and progress is hard won. Any Western worth its salt recognizes the harsh realities of life on the bleeding edge of society, and the best are wise about the type of person likely to make a life there. The Lone Ranger is an oddity in that it tries to be both a summer blockbuster and a great western film, mixing popcorn action sequences and spaghetti western cynicism into its own strange stew of influences. When it works, this is something to behold, and though this is a flawed film, it wears most of its mistakes like a badge of honor. In a summer where too many blockbusters have played it incredibly safe, The Lone Ranger's scruffy charm is endearing.

John Reid (Armie Hammer, playing truth and justice personified with considerably more charm than his character's Boy Scout nature implies) returns to his home state of Texas as a lawyer, seeking to defend truth and justice. When his lawman brother (James Badge Dale) gets gunned down by an escaped prisoner, Butch Cavendish (William Fichtner), Reid joins up with outcast Comanche Tonto (Johnny Depp) to ride the criminal down and bring him to justice. In plot, and often in execution, the film is a classic Western, with train chases, shoot outs, saloons and "Injuns." Yet The Lone Ranger is also the best super hero film of 2013.

Though its played as an entirely different genre, this is very much a super hero origin story, showing us a world where justice is rarely done, and introducing us to the sort of man brave enough to put on a mask to fight for what's right. The film's cynicism makes Reid's transformation into The Lone Ranger somewhat bittersweet; there's a tragedy to the fact that a good man has to wear a mask, and the film, if not its hero, is very wise to the fact that Reid is too good for the world he's living in. Its hard not to imagine a Superman film with the same basic themes, where we follow an impossibly good man in a world that can't and won't live up to his standards, and it seems impossible that such a movie wouldn't outdo Man of Steel. The inspiring tragedy of John Reid, and the bittersweet optimism he represents, is one of the best things about The Lone Ranger, but its far from the only thing going on here.

Its impossible to discuss the film without addressing the bundle of contradictions that is Tonto. Depp's performance too often strays into Red-Face caricature, and the film's attempt to paint Tonto as a weird outsider don't make the actor's collection of quirks any more palatable. Presenting the story as a frame tale told by an aged Tonto is a clever conceit the film never really figures out what to do with, but in a few moments, it adds to the film's concerns about the costs of progress quite well. This is a movie that simultaneously decries the horrific treatment of Native Americans in the West, and stars a white man in stage make-up with a dead crow on his head; for every moment it is sharply critical of the way the west was won (John Phillip Sousa has never sounded more ominous), there is a corresponding moment of perplexing insensitivity. Depp seems to be playing Tonto as an homage to Gary Farmer's take on the mystical Native American side-kick in Jim Jarmusch's Dead Man (in which Depp starred), but however grand his intentions, there are barriers his performance just can't breach. Sadly, this is just another scrap on the heap of fright wigs and accents that has swallowed Depp's career for the last decade. The rest of the cast acquit themselves well, ranging from Hammer's charming adequacy to Fichtner's snarling intensity, with a malevolent Tom Wilkinson splitting the difference.

The action here is good, though bombastic and occasionally drawn out. The film boasts not one, but two huge set-pieces featuring run-away trains, and though the latter is overlong and overcomplicated, it is triumphant enough to make up for its self-satisfaction. Scored to the William Tell Overture (our hero's theme) and mixing laughs with gunshots, the climax is the right kind of too much, which almost fixes the excess. The languorous middle section may irk some, but this is, after all, a Western, and the time it spends developing a sense of place and raising its considerable stakes is well spent, in the end.

There is blood in the water where The Lone Ranger is concerned, and the animosity from both critics and crowds confuses me. This is a flawed movie, yes; too long and too racially mixed up and some will say too derivative. But its also the summer blockbuster that tries the hardest. This film is putting on a show like nothing else at the multiplexes this season, with big action, plenty of comedy, fun characters and an epic sweep. Its also the only blockbuster that feels like it wasn't pulled out of a money-making mold. This is a weird, mixed up little movie blown up to big budget scale. And while it won't be for everyone, that makes it one of the most interesting movies of the summer.