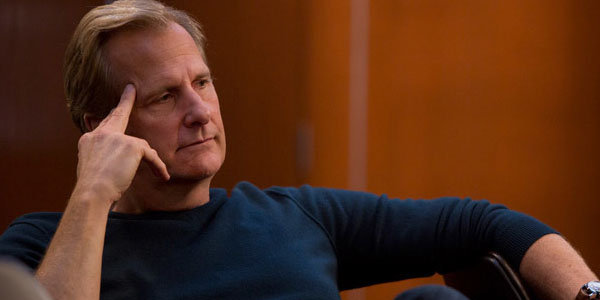 I will admit up front that I haven't watched The West Wing, although to hear a lot of people talk about The Newsroom, Aaron Sorkin's former political drama is required viewing. I think, though, that in a way it lets me be more impartial. I may not be as familiar with Aaron Sorkin's work as some, having only seen Studio 60 on the Sunset Strip, but I think it lets me be more unbiased about this show, not having an opinion about the creator one way or the other.

My main issue with the series as judged from the first season is that the writing is very two-dimensional at times. It's strange, because it's evident that the politics and economics of the storylines are extremely well researched, and you do come to care for and root for the characters, but the characters you're cheering for always have the best insults and comebacks, while the villains are uniformly stupid, inarticulate, and blunder into verbal traps. Since last season, whenever I talk to people about the show, I find myself coming back to one phrase: Reality Fan Fiction.

It would be great if there was a news team of such integrity and heart that anyone with any sense would love them, who always seemed beset by a horrible convergence of events, who served as a nation's conscience, but in this show it always seems so forced and unlikely. Will always sticks it to his corporate employers as well as (admittedly somewhat realistically) clueless Tea Partiers, MacKenzie always comes off as remarkably capable but adorably blundering in everyday situations, and Jim and Maggie are performing the same little Jim and Pam play we've seen so many times before. Sometimes I wonder if Aaron Sorkin has ever sat down at his computer and composed a short novel in which he attends Hogwarts and thwarts Voldemort.

That being said, I did actually enjoy the first season a lot, and I want to come into Season 2 giving it the benefit of the doubt and assume they've worked out all the cheesy kinks and will make the characters feel more real.

The characters are all seamlessly still tortured, after everyone's almost-but-not-quite happy endings last season: Will still bemoans his loss of popularity whenever he makes inflammatory remarks, but refuses to compromise his journalistic integrity. Mackenzie is still in love with Will but is also committed to the extremely difficult task of running the news team for the most controversial cable news program on television. Jim hates seeing Maggie with Don, Don hates himself for not being as in love with Maggie as he wants to be. Sloan likes Don, and is also fighting to be respected as an economist and a broadcaster. Neal wants so badly to be a reporter but finds out how difficult and risky a job it is when you're trying to make a name for yourself. And Charlie, like MacKenzie, is trying to keep the whole show running, even as Will inadvertently harms his own employers.
I don't claim to be an expert on comic book heroes by any stretch of the imagination, but my bizarre tangent this week is about how I see Will McAvoy as a Bruce Wayne figure. I don't mean pun-making Adam West Bruce or nipple-plated pretty boy George Clooney Bruce, but the pathological Frank Miller/Christopher Nolan Bruce. Will is a very rich, very influential public figure in the city he lives in, and indeed sees himself as a savior of his country. He refuses to back down when asked to compromise the integrity of his broadcast, even when it destroys his personal life to keep himself incorruptible. One character in the last Batman movie commented on how Bruce likes to play nonchalant and disaffected, but he must secretly care about his city, or else he wouldn't be so devastated when he fails. I see a lot of the same dedication in Will, and one of my favorite running subplots is how personally injured he is every time his attempts to inform the American public fairly and intelligently are met with scorn. He refuses to turn from his path, but from the brief eleven episodes I've seen so far, it does seem like he takes it a little harder each time. In this episode, for example, he's taken off of the September 11th memorial broadcast, and it's obvious how deeply it bothers him, when he's sacrificed so much for the sake of his country.

It's too soon to really make any judgments of the season. I want to wait for storylines to develop a little more before I even comment on the plot too much. The first season was great, but kind of choppy, and I think the second season is going to make or break the show. Meanwhile, if you haven't watched the show yet, I recommend catching up. The worst that can be said of the show is that it's a guilty pleasure.

-I'll forgive it this one time, as the season needs to build up steam and hit a stride, but the flashback shtick was more or less exhausted last season. Now it just feels lazy.

-Maggie cut her hair really short and dyed it orange due to some horrible intense thing that happened in Genoa. They tease us by immediately flashing back, leaving me yelling at the television when the episode is over.

-The story moves along almost solely based on dialogue, which is a very different vibe from the last show I reviewed here, Game of Thrones. It's interesting, since it's a show about spoken, broadcast news, and what the characters say is the only source we have to judge them by.

-What happened to Neal's girlfriend from Season 1?

-Why have the big buildup that culminates in Don and Maggie staying together in the first season, just to break them up in the first episode of the second season?

-I have to admit, with the way the show tends to glorify the underdog, I was assuming they Occupy Wall Street crowd would be portrayed as heroes. It was in a twisted way refreshing that they depicted them as naÃ¯ve and petulant kids.

-No matter what I'm watching, every time somebody who goes to NYU shows up comes off as a self-important prick. As an alumnus I should probably be offended, but the emotion I feel most is probably shame.