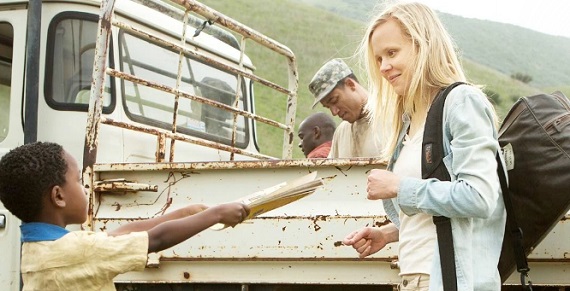 All in all, I'd have to say I was pleasantly surprised. There's been a lot of bickering on the show lately, about silly things that aren't really relevant to the plot while pieces are moved around to get to the big plot events. I enjoy the show, don't get me wrong, but starting a season off with three episodes of filler doesn't make for the most riveting television.

There have been a few jabs at the Occupy Wall Street movement this season, but they really laid into them tonight. As misguided as a lot of that movement was, you had to feel bad watching them be torn apart like this. It sort of has a happy ending when Will apologizes to Shelly, but it's still pretty rough. I will say that this episode created one parallel that is either a very clever move on the part of the writers, or a very funny coincidence. Will says that he had to make her look like a fool on national television so that he could get points for being a moderate. Likewise, I have to wonder if this was Aaron Sorkin's way of trying to show that this television show isn't just a pulpit to bash the Tea Party from.
\t
The show made a surprising change in tone when it actually followed Maggie and Gary to Africa. Such a vast majority of the show takes place either in New York's high rises or on its streets that it felt really fresh and new to see the cast out and about in the world. The scenes where they were in the school were adorable (and a little heartbreaking, when Gary brings the camera in and all of the children think it's a gun). Still, it didn't feel like enough groundwork to give proper gravity to the end of the episode.

I am not trying to downplay how serious an event it is, in fiction or reality, when a child is shot and killed. What I will say is that I'm not sure it was the best decision to build up to it so much in the abstract, but hardly at all when they finally get to Africa. They really drew out the tension for the audience, as we were left to wonder what kind of brutal gang rape Maggie was subjected to since the season premiere a month ago, and it fell flat. The thing is, Aaron Sorkin may have underestimated people's imaginations in an age where roughly 60% of all primetime television is crime-related. I'm sure I'm not the only one who imagined some really horrific scenarios that could have been the source of Maggie's nervous breakdown. After all, this is the network that produced Six Feet Under, which kicks off every episode with a brutal death, Game of Thrones, which on a good day only kills off a couple beloved secondary characters, and Oz, which I haven't seen, but I can only assume is six straight seasons of prison rape.

It's been a B season so far. This week picked up a little from previous weeks, so I can only hope that there is going to be some real Grade A material coming down the pipe. I thought the Maggie thing was going to be the focus of the entire season, so I'm interested to see what they're going to start on now, now that they've dispelled the big mystery.

-I cracked up when Charlie scared McKenzie with his face up against the glass. I think we all sort of wish we had a boss like Charlie Skinner.

-I hate to be morbid, but it wouldn't be a terrible idea to make the show a bit more R-rated. The show is already classified as TV-MA, but aside from the occasional F-bomb it's mostly tame. I'm just saying, you don't need to overdo it, but in its time and place a bit of graphic violence is a powerful storytelling tool.

-I would really love to see once in my life a storyline about people in their 20s that didn't awkwardly force a romantic subplot. I really don't care about the snotty bitch from Vassar, and when she kissed Jim all I felt was mild annoyance that this soap opera is taking up the same HBO airtime that some of the greatest television ever made has been broadcast on. I wasn't even entertained that Jim did something nice for that girl and she found out in such a cutesy way, because I just don't care about them.

-I'm starting to feel like I'm making myself out to be a big Olivia Munn fan, but honestly, until this show began last summer I couldn't tell her apart from Megan Fox. Or maybe it was Heidi Klum. In any case, she keeps getting more adorable with each passing episode.