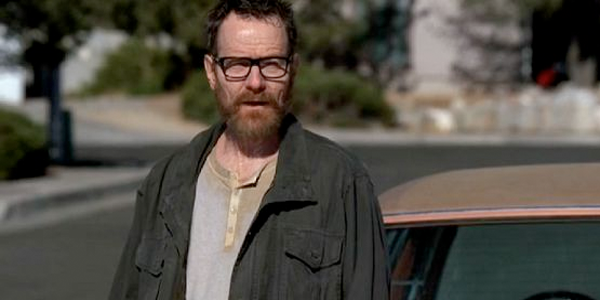 The first half of Breaking Bad's fifth season opened with a flash-forward, showing us Walter White a year older, hairier, and lonelier than we knew him. He was on the run in New Hampshire with a machine gun in his trunk and dark shadows at his back. Now, as we return for the final stretch of episodes, we see this same Walter return to his fenced up, long abandoned home. We see "Heisenberg" scrawled in graffiti on the wall of his living room. We see skateboarders using his dried up, emptied pool for sport. And we see Walter White return for the ricin he hid behind a socket in his bedroom, the chicken coming home to roost, the player in Vince Gilligan's grand epic finally picking up the show's greatest Checkov's gun. Where it is aimed is anyone's guess, but it is clear from the first that things are bad and about to get much, much worse.

Since the cliffhanger that ended last (half) season, there has been much anticipation regarding where the show would return. Would we get to see Hank in the moments after he makes his discovery, or would the show jump ahead to when he has pieced everything together. In "Blood Money," Breaking Bad gets to have its cake and eat it too, showing us Hank's panic attack in the moments after he flees from the White household, and ending with his stunning confrontation with Walter, where both men lay their cards on the table and we are left gasping, terrified and fascinated at the prospect of what will happen next. This show has always been in utter command of its pacing (last season's finale, "Gliding Over All" was one of the most perfect examples of pacing I have ever seen on television), and this mid-season premiere is no different. We get to see things simmer, briefly, and then conflict bubbles up ferociously.

One of the trickiest lines the show has always walked is making Hank both a hyper-competent DEA Agent and completely unaware that his brother-in-law is a drug kingpin. The show has largely dealt with this by both showing us Hank's brilliance in regards to other cases and by reminding us, again and again, that Hank is only one step away from catching Heisenberg. Hank was at Tuco's house at the same time as Walt. He was outside a motor home containing Walt and Jesse. He was driving to the super-lab to reveal Walt's workplace. He was onto Gus Fring when no one else was. Hank has never caught Heisenberg, but he's always been very, very close, and so it's no surprise that he quickly puts the pieces together once he steals Walt's Whitman and holes up in his garage.

Meanwhile, Walt is pretending to be out of a game that has seeped so far under his skin it has consumed his very soul. While he plays at being a small business owner (shades of Gus once again), the wheels are always turning in his mind, and its clear that Walt isn't done, not for a second. He suggests to Skyler they buy a second car wash to launder their ill-gotten gains twice as quickly. He lies to Jesse to get him to keep money he was otherwise planning to give to victims of their collective crimes. He's visited by Lydia, who complains the purity of her product is now as low as 68%, and while he refuses to get back in the game, it is hard to believe he won't be seeing her again before long. Heisenberg hollowed out Walter White completely, and its a joke for him to now pretend to disappear. The idea of Walter White smothering Heisenberg is completely laughable now. Dr. Jekyll is gone forever; Mr. Hyde runs the show.

The scene in which Walt lies to Jesse is one of the most fascinating sequence in an episode full of them. Walt has absolutely no compunction lying through his teeth, and Jesse is too exhausted of being fed untruths to really object to the completely implausible line he's being fed. Jesse is so empty he simply wants to be rid of the "blood money" Walter has given him, and when Saul's advice and Walt's firmer hand keep him from donating it to the people he has hurt, he simply starts to throw it away, giving a bundle to a homeless man, then driving throughout the city, throwing his money out the window. Jesse has never been the subtlest of thinkers, and on some level, this must be his attempt to cope with what he has become. If he can simply rid himself of the money, he must imagine, the guilt might start to disappear as well. There's a stain on his soul he wants to wash off, but everywhere he turns there are people trying to make sure he doesn't do anything to absolve himself. Jesse can't make amends, so he is rebelling in an empty way instead. In a way, this is no different than Walter White doing donuts before burning a car in a parking lot. Jesse is raging at the universe, and getting only silence in return.

The episode ending confrontation between Walt and Hank is something the show has been building to literally since the pilot, so it is sort of incredible that it doesn't disappoint. There would be no joy in seeing douchebag DEA Agent Hank take down meek chemistry teacher Walter. If Hank had caught his brother-in-law early in the show, he would have been cuffing a broken shell of a man who had made some bad choices when raging against his own impotence. Now, Hank has evolved into the show's moral center, a passionate, funny, loving good-doer on a quest to make the world a better place. And Walt has become the monster that always lurked inside of him, embracing Heisenberg completely. In "Gliding Over All" we watched as Walt's criminal empire developed, and as its kingpin grew bored with its tedium. That episode made clear it was never making meth that drove Heisenberg. Production wasn't what made Walter White feel alive. It was triumph, the destruction of anyone that stood in his way. It was control, the subjugation of his enemies. It was survival that made Walter White feel alive, and now, after a month of feeling safe (and several months before it of discovering the tedium of running the empire he built), he has a new foe that threatens to end him. The closer Walt comes to the edge, the more he struggles not to go over it. The more he struggles to keep from going over the precipice, the more he feels alive.

Walt is a smart man, and he systematically takes apart Hank's every justification for bringing him down. Hank may want justice, but the cancer is back and Walt will die before he sees the inside of a jail cell. Hank may love his sister-in-law, his niece, and his nephew, and bringing down Walter will tear his family asunder. Hank has lost a lot in his quest to bring down Heisenberg, and he may just finally want peace. But how far is he willing to go to get it? We've already seen Walter White is a man without limitations, but Hank is a different creature entirely. He is committed to justice, but at what cost? Hank is a man with quite a lot to lose, and Walter White likes few things as much as he enjoys taking. This is the confrontation we have all been waiting for, and the stakes couldn't possibly be higher. Walter White's soul has been destroyed by his lust for power and his eagerness to feel alive. What matters now is whether Hank can keep his when he faces off against the Devil that has spent years living right under his nose.

-This is the final stretch of Breaking Bad episodes. As such, I probably won't be stingy with the "A"s, so long as the show keeps earning them.

-I'd love little more than to see the show end with Walt as a simple car wash manager, unknown and unremembered. Those flash-forwards tend to make me think that won't happen, though. I have great faith whatever Vince Gilligan and his writers come up with will be stellar, however.

-"Why do you think McCoy never wants to beam nowhere? 'Cause he's a doctor, bitch! It's science, man, look it up."

-"When they start to whack the lawyers, that's where I draw the line."

-"The past is the past. Nothing can change what we've done. But now, that's over. You're out. And so am I."

-"There's nothing left for us to do except to try to live ordinary, decent lives."

-"If bowling's off, can I get a late curfew?" Walter Jr. really has his finger on the pulse of this show.

-"I don't know who you are. I don't even know who I'm talking to." "If that's true, if you don't know who I am, then maybe your best course is to tread lightly."
Tags: Breaking Bad
comments powered by Disqus