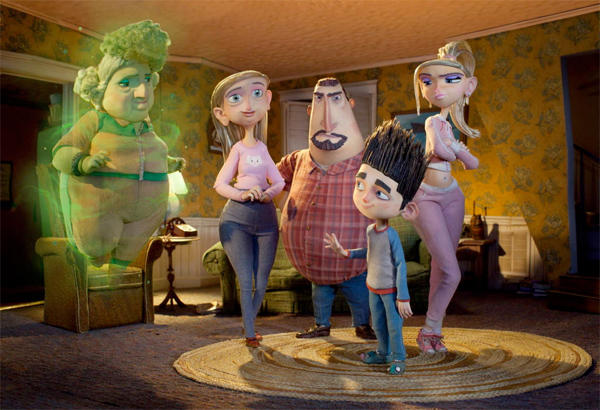 Even though I watch pretty much every animated feature that comes out, there are few that I would recommend wholeheartedly. I'm fond of examining animation techniques, but I also know that often animated features fall too far into an overly-simplified story arc that panders to children rather than treating them like the good readers that they actually are--I think many a childless adult would be surprised at the savvy reactions children have to the dumbed-down fare that is marketed to them. ParaNorman is one of those films that I don't think would necessarily appeal to either children or adults on paper, but the beautiful animation combined with a complex story about grieving and forgiveness do not pander to kids, nor do they speak past them and focus on the adult audiences, and unlike its spiritual predecessor, 2009's Coraline, ParaNorman isn't too scary, despite the zombie uprising at the center of the film.

The story takes place in Blithe Hollow, Massachusetts, the exact sort of frosty New England town to lovingly pay tribute to its Puritan predecessors by forcing its children to dress up and reenact the historical witch trials of the past. During a rehearsal for the yearly pageant, oft-bullied Norman Babcock (Kodi Smit-McPhee), who can communicate with the ghosts who populate the small town (of course, no one believes him), taps into the town's history by reliving the persecution of one of the young witches killed hundreds of years in the past. Norman is told by his eccentric and estranged uncle Prenderghast (John Goodman) that he must find a book that will help him to right the wrongs of the town's collective past and free the living from the ghosts of the Puritan fathers who persecuted the witches so long ago. Along with his disbelieving sister Courtney (Anna Kendrick), local bully Alvin (Christopher Mintz-Plasse), new found friend Neil (Tucker Abrizzi) and his older brother Mitch (Casey Affleck), Norman searches for the book and attempts to preserve the town and get to the bottom of its dead residents' unfinished business.

While the climax of the story (at least for me) left some room to be desired as far as giving a "moral" to the story, and the pacing is downright languid at times, the voice work (aided along by such talents as Leslie Mann and Jeff Garlin as Norman's parents and Elaine Stritch as Grandma) is energetic and the animation is gorgeously rendered (director Butler worked in the art department for both Coraline and The Corpse Bride). Seriously, the animation alone makes up for any plotting problems you might find--watch it on as big of a screen as you can find. The film also pays tribute to many of the creature feature and classic horror films of the past so that any scream-freak will have fun catching the references. It is absolutely delightful, though not without its faults, and a visual treat for anyone looking for a solid family-style diversion.

Another film with a charming cast (Paul Schneider, Olivia Munn, Aisha Tyler, Constance Zimmer, Nat Faxon ) that cannot live up to the talent collected, this is one of those gross-out movies that has a chance of being actually disgustingly funny. Unfortunately, director Chandresekhar and writers Peter Gaulke and Gerry Swallow (and the rest of the Broken Lizard gang) squander any goodwill you might bring to the film by relying on outdated stereotypes and plot points that force you believe that A) none of the characters has ever spoken to any of their friends with anything resembling honesty at any point in their lives and B) that given a chance to make any kind of rational decision, naturally these characters will choose the absolutely most rash and inexplicable option possible in order to drive up the "hilarity" of the situations that ensue. Better to skip this one and go back to Super Troopers or even the under-appreciated Beerfest.
Tags:
comments powered by Disqus