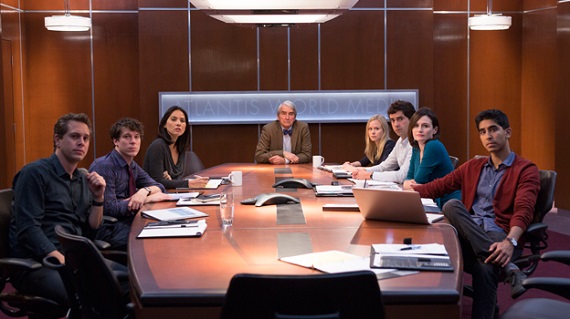 The Newsroom 3.06 - One Step Too Many
By Adam O'Brien
After a promising first season, The Newsroom seems to be trying to coast for its second. The characters haven't really developed any more, and at times even seem to become more two-dimensional. Even Maggie's trauma plot seems stinted and unnatural.
\tThe only thing close to plot development I could make out in this episode was when the news team, still in pursuit of Operation Genoa, tracks down a retired general, played by Stephen Root. In previous episodes the Genoa story seemed unlikely, and there seemed to be some nebulous problem with it in the future, but it wasn't until this episode that we see where everything started to fall apart, namely where Jerry doctors the video of the interview with the general to make it look like he said something he didn't. In hindsight, maybe Maggie's accidental mis-cutting of the Zimmerman tape was meant to foreshadow the moment where Jerry makes another misleading cut, though I don't know how any viewer was supposed to guess that this was coming back then. Maybe it will be brought up in the case against them that this isn't the first time this news team has done it, or maybe it's just meant to enhance the rewatch value.
On the plus side, although the untrue news broadcast is loosely based on actual events from the 1990s, it's the first fictional major plot point in the show, which shows at least some initiative. Instead of playing Rosencrantz and Guildenstern are Dead, cleverly writing around and into a former narrative from another perspective, the Aaron Sorkin have invented something that would have had major repercussions had it happened.
Newsnight with Will McAvoy is bearing more and more resemblance to The Daily Show with Jon Stewart. I sort of saw the two men serving the same sort of purpose, but after tonight when he started putting clips of things politicians said years ago next to clips of the things they were saying in the Republican primary, I have to think Will McAvoy is at least partially modeled on John Stewart.
I used to think it was refreshing that an actual non-comedian news anchor, even a fictional one, was laying into the hypocrisy of contemporary politics. However, lately it's been getting old. One, Will seems ever less principled and more a mad dog that attacks anyone he can dupe into coming onto his show. Two, I can't imagine why he acts this way while at the same time whining that people don't like him anymore. I know Aaron Sorkin is capable of more intelligent, three-dimensional writing, but I can only give him the benefit of the doubt that there's a bigger picture at play for so long.
I didn't want to believe that HBO would let a Sunday 10PM slot fall so low, nor that someone so beloved in television and movies as Aaron Sorkin could produce such hyper-intelligent drivel, but it's time to face facts: The Newsroom, like so many dramas with promising first seasons, has fallen into the second season slump. That's not to say the rest of the season will definitely be unwatchable. It may even redeem itself. However, for the time being, I have to say I'm disappointed.


Other Thoughts:
-I once heard somewhere that Stephen Root is the least typecast actor currently working, and I have to say I find that to be true. It's difficult to see the insurrectionist from Robocop III, the office shlub Office Space, and O Brother Where Art Thou? as being played by the same actor.
- In hindsight, maybe Maggie's accidental mis-cutting of the Zimmerman tape was meant to foreshadow the moment where Jerry makes another misleading cut, though I don't know how any viewer was supposed to guess that this was coming back then. Maybe it will be brought up in the case against them that this isn't the first time they've done it, or maybe it's just meant to enhance the rewatch value.
-It's a little shameless that Sorkin's little news team are all angels, and the major breach of integrity comes from the producer visiting from DC.
-Now I guess Jim is dating that girl he hates and who hates him? And they are very lovey dovey?
-Maggie is still playing some more sympathetic, victimized version of Lady Macbeth. It bores me so much I can't even write about it. You know what would have been compelling character revelation? If she didn't care that a child died in her arms.