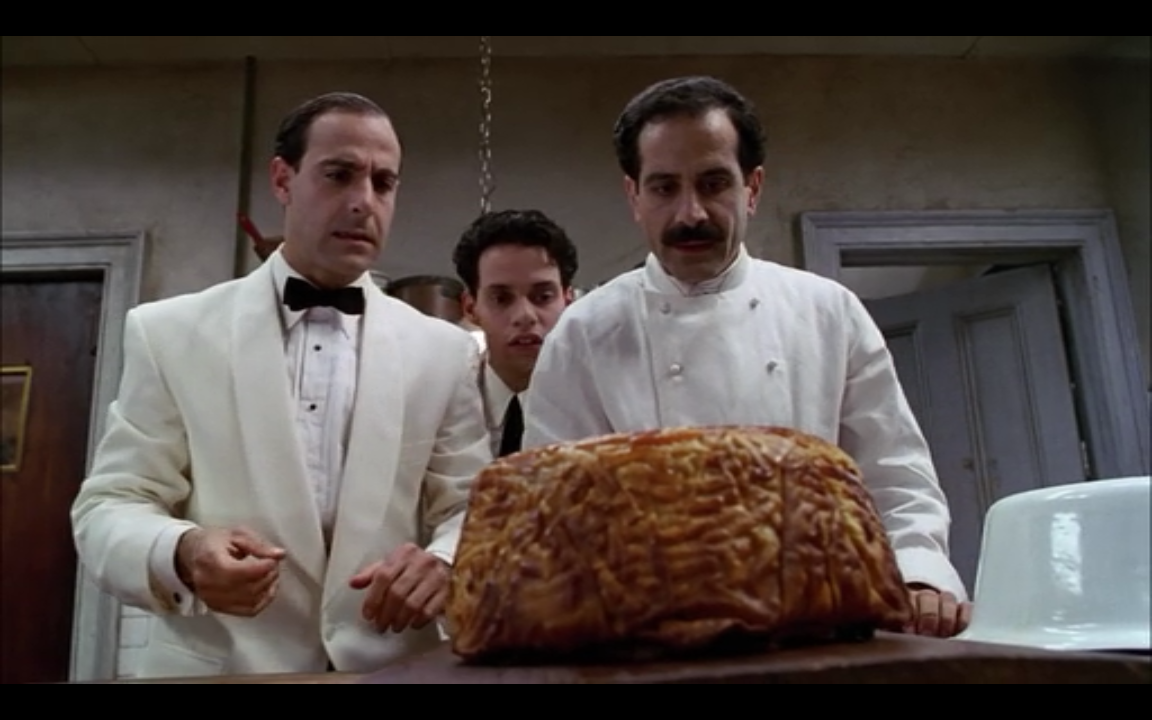 Before I jump into trying to convince you to watch Big Night, I wanted to throw a quick mention of a few other things playing instantly on Netflix that probably don't need full-length recommendations. First, if you haven't already watched Orange is the New Black in its entirety, I don't know what is wrong with you. It is fantastic. Go watch it now, but if you don't, it isn't going anywhere since it is Netflix-made, so, you know, watch it sometime. Second and third, though, are two Carey Grant vehicles: Charade (1963, dir. Stanley Donen), with Audrey Hepburn, and His Girl Friday (1940, dir. Howard Hawks), with Rosalind Russell. Both are charming capers, and both probably aren't going to disappear from Netflix anytime soon either, since they are both in the public domain. But, you know, just because they probably won't disappear any time soon doesn't mean they aren't worth a watch"¦

Now. Big Night. The story itself is pretty simple: two Italian immigrant brothers try to run an authentic Italian restaurant on the Jersey Shore in the 1950s. Because of the local aversion to non-Americanized food and chef Primo's (Tony Shaloub) refusal to compromise his recipes, the restaurant is struggling, and Secondo (a young and supremely charming Stanley Tucci) is unable, despite many attempts, to raise funds to keep the business alive. Secondo, however, is in the full throes of the American dream, and believes that if only Primo would bend from his perfectionist ways, or if only they could have one (you guessed it) big night to showcase authentic cuisine on their terms, then the restaurant would be full and they could have the life"”cars, women, celebrity patrons"”that he imagines. Primo, on the other hand, has no problems with the thought of returning to the family business in Italy if the American branch ends up folding. Secondo seeks the help of neighboring business owner, Pascale (Ian Holm), whose restaurant thrives because of its Americanized fare. Pascale would like for the brothers to come work for him, but Secondo knows that Primo would resist, and he wants to be a true American success, which of course means being his own boss. In what seems like a generous offer, Pascale tells Secondo that he will bring jazz great Louis Prima to dine at the brothers' restaurant, and the pair spend much of the film preparing for what they see as their last chance for success.

Both brothers also struggle with love"”Secondo refuses to commit to his girlfriend Phyllis (Minnie Driver) because he feels he cannot provide a life for her, all the while sleeping with Gabriella (Isabella Rossellini), Pascale's wife. Primo, bombastic and demanding in the kitchen, is quietly in love with florist Ann (Allison Janney). As the big night arrives, tensions, fears, and expectations escalate, raising questions about the nature of the American Dream narrative many of us have grown up with: to whom is that narrative available? And what would you be willing to do to achieve it?

This film is sweet, and in many ways quiet, and filled with gorgeous food (seriously, eat a full meal before watching this one or your stomach will growl the whole way through) and fantastic performances. It is thoughtful, engaging, and a great antidote to overly quirky independent fare. Give it a try: it is delicious.

This is going to sound like sacrilege to many readers, but I've been waiting to find another Peter Jackson film that is as solidly good as 1994's Heavenly Creatures (because seriously, how good is that movie? So. Good.). So far, nothing even remotely measures up, and Michael J. Fox vehicle The Frighteners is no exception. In a weird way, it feels like two films unevenly sutured together"”one part haunted comedy, one part dark serial killer romp"”and neither one of them is quite strong enough to balance out the other: the comedy isn't funny or even really charming, and the slasher plot isn't nearly dark enough to give the film any weight or depth. To make things worse, the special effects are downright laughable, and the story, which is definitely original, gets squandered by a slew of phoned-in performances (only notable exception is the delightful scenery chewing of the Re-Animator himself, Jeffrey Combs, as obsessive FBI Agent Milton Dammers). Spare yourself this one"”not even safe for the biggest Peter Jackson fan.