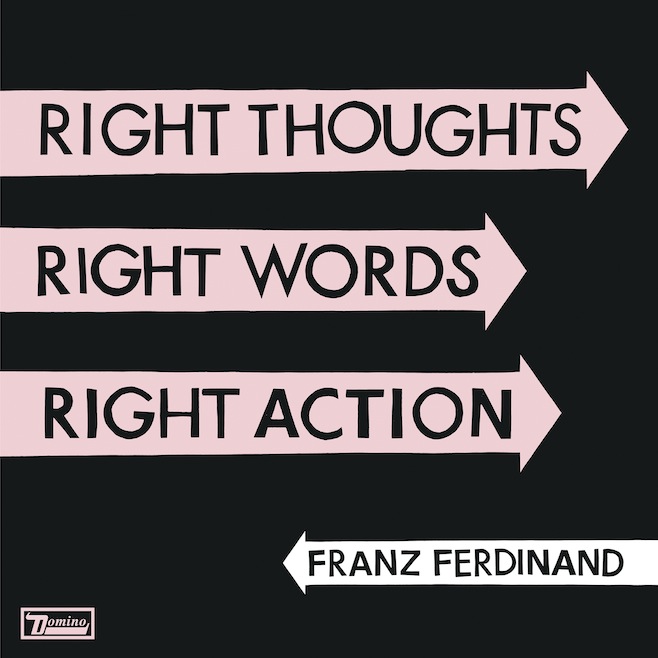 When I told people about my excitement for Franz Ferdinand's new album, most seemed to have the reaction, "oh wow, they're still around?" The Glasgow-based indie rock quartet shot to the top with megahit "Take Me Out" from their 2004 self-titled album, which contained a number of great dance-rock hits largely owing to drummer Paul Thomson never letting up on the hi-hat. In 2005 they released their sophomore effort You Could Have It So Much Better, which had both the dance-rock hits (including the used-for-everything "Do You Want To" and the excellent "Outsiders") and new sounds with songs like "Eleanor Put Your Boots On." Third album Tonight: Franz Ferdinand did not come out until 2009, but was well worth the wait. Songs like "Turn It On" and "No You Girls" were among their catchiest numbers yet, and the usage of synthesizer kept things fresh and worked well for the songs. The entirely electronic and wholly out-of-context second half of "Lucid Dreams" is one of my favorite parts of the album, and I was hoping for more surprises in new releases.

With three solid albums under their belt and an album four years in the making, the bar was set fairly high for Franz Ferdinand's new release Right Thoughts, Right Words, Right Action. I imagined all sorts of new sounds for the band, and single "Love Illumination" made it seem as if they might even return to the first dance-rock style. Instead Right Thoughts, Right Words, Right Action is a collection of ten indie rock songs that don't really seem to have any sort of distinct style.

There are number of really catchy songs on the album, and I will admit this is something Franz Ferdinand excels at. Opener "Right Action" has an early Rolling Stones-esque tempo that got stuck in my head in about 10 seconds, and singer Alex Kapranos singing the album's title over and over makes it a simple and accessible pop number. The scattered clamor on "Evil Eye" goes over one of the album's dancier beats, and the quick garage-rock tune "Bullet" has a great guitar melody. "Stand On The Horizon" seems to have a throwback dance-rock beat and a slight disco influence, even if it lacks the over-the-top quality of earlier tracks that would fit this bill. Meanwhile, while single "Love Illumination" geared me up for the album, it doesn't really stick out at all amidst the other tracks. It's by no means a bad song, but it's roaring guitars don't make up for Kapranos's half-hearted sounding vocals.

Other tracks have good melodies, but their clumsy lyrics make them harder to appreciate. "Fresh Strawberries" opens with "We are fresh strawberries/fresh burst of red strawberries/ripe turning riper in the pole," which is a metaphor that seems like it would work better on a twee-sounding of Montreal track and not a rock song. And while the synth organ on "Treason! Animals" is a nice touch, lines about being king of the trees and the animals feel a little kitschy. Then you have songs like "The Universe Expanded" and "Brief Encounters," which never seemed to hold my attention during listening. I do have to say though that last song "Goodbye Lovers & Friends" really does stand out though, even if not catchy at all, mostly because it makes you wonder if the band is serious when Kapranos ends the album with a gripe about playing pop music and saying "but this really is the end." It seems unlikely that the band would end their career with that verse, but going "wait, what did they say?" during a song and checking to see if the band broke up while you weren't paying attention is a great way to get fans to pay attention.

Yes, most of the songs on Right Thoughts, Right Words, Right Action are indeed catchy, and the band doesn't totally abandon old tricks nor do they carbon copy old formulas. However, the extravagance of Franz Ferdinand seems to be a bit absent, as if the album's theme is less "we're gonna explode onto the scene and change the world like our Austro-Hungarian Archduke namesake's assassination" (this is a reason they chose their name) and more "we made a pretty good indie rock album." It doesn't seem like the type of album where you'll hear its singles 8 years later at the supermarket (yes, I heard "Do You Want To" at Safeway today), nor does it throw you a curveball like "Lucid Dreams" where you get pumped for what they might try next. It's not an album so bad that you want to delete it or honestly even skip most of its tracks, but it is enough to make you worry if the lyrics on that last track are a credible threat.