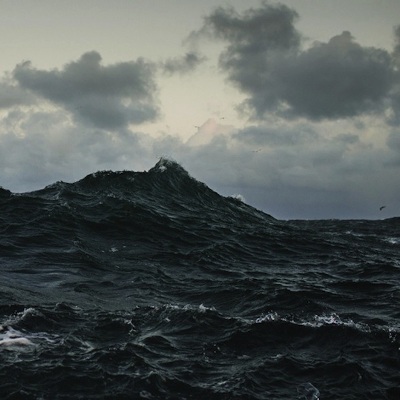 Bottom Line: Much less ambient than its predecessor, Repave sounds like it could have been a pretty good Bon Iver album.

For those that don’t know, Volcano Choir’s frontman is Justin Vernon. Yes, THE Justin Vernon. Mr. Bon Iver himself. Yes I know that Bon Iver also includes people like Sean Carey, Michael Noyce, and Matthew McCaughan, but Vernon was the founder of the group and made For Emma, Forever Ago all by himself. And don’t tell me that hearing “Bon Iver” doesn’t make you think of that bearded, falstetto-singing, cabin-secluding Wisconsinite.

With this in mind, it’s easy to see how Justin Vernon could steal the show in Volcano Choir, which is actually a collaboration between Vernon and post-rock band Collections of Colonies of Bees (no, I haven’t heard of them either). During my first listen of Volcano Choir’s 2009 debut Unmap, I thought “oh this must be a Bon Iver side project!” as soon as I heard Vernon’s falsetto howl, and I imagine I was not alone. Hell, the second to last track “Still” is more or less an extended, fuller version of “Woods” from Bon Iver’s Blood Bank EP, complete with the same vocals. Despite this commonality, it should be noted that Unmap sounds almost nothing like either of the two Bon Iver albums, and is far more ambient and experimental. Essentially, Vernon’s voice is utilized more to produce tones than actual lines of lyrics, and Unmap can best be described as part Bon Iver, part Sigur Rós, and part early Animal Collective (when they chanted and shit).

If you expected another post-rock (that’s ambient rock folks) or experimental album with Repave, prepare to be surprised. Gone are tracks with sparse notes and Vernon humming to be replaced with songs that sound…well, like Bon Iver. But in a good way!

Right from the outset of the album it’s pretty apparent that this is designed to be a more accessible record than Unmap, as opener “Tiderays” starts with Vernon’s falsetto and gentle acoustic notes before getting a little heavier about halfway through. It also uses a snare drum to build up the tempo, and is actually kind of comparable to “Perth” from Bon Iver. I won’t go comparing the remaining tracks to Bon Iver though, as Repave does have several aspects that remind you it’s actually by Volcano Choir. The experimental aspect hasn’t gone away entirely, as “Alaskans” has a somewhat strange vocal sample of poet Charles Bukowski at the end discussing death. “Comrade” sounds like standard fare until the end when Vernon starts singing with a Vocoder (not autotune like he did on “Woods”). And speaking of Vernon’s voice, he only uses his trademark falsetto sparingly on the album. He seems to prefer his natural voice when singing more intense parts, such as standout track “Dancepack” where he belts “take note, there’s still a hole in your heart.”

Aside from vocals, the instrumental parts of the album aren’t too out there nor are they cookie-cutter folk parts. Second track “Acetate” has an irregular beat accompanied by a piano melody, and it becomes fairly chaotic towards its end. “Alaskans” has a pretty sparse acoustic guitar part somewhat similar to “Husks and Shells” from Unmap and likewise could have hosted choir-like vocals instead of straight-up singing. Meanwhile, “Keel” has a ton of reverb and perhaps the least standard structure, with a somewhat “creeping” guitar noise throughout. These songs manage to try something different without being annoying (case in point: “Mbira in the Morass” from Unmap).

Despite all of these differences, it wouldn’t be too out there to say it sounds like it could have been a third Bon Iver album. While I have mentioned the differences, there are a ton of similarities, and the accessibility of the album should not be understated. Closer “Almanac” is great, but if you told a Bon Iver fan that it was preview of a new song they probably wouldn’t give it a second thought. You should also consider that while For Emma, Forever Ago was a lo-fi masterpiece recorded by Vernon in a cabin, Bon Iver introduced a synthesizer to most tracks to the point that last track “Beth/Rest” sounded like Phil Collins. Therefore, it wouldn’t be a stretch to imagine this as a Bon Iver release or even a side project. That said, if you’re a fan of Justin Vernon, be it through Bon Iver or his guest appearances on Kanye West tracks or supergroup Gayngs, I definitely recommend this album. However, if you were a diehard Volcano Choir fan that liked Unmap more than any other Vernon appearance, you might be a little disappointed.