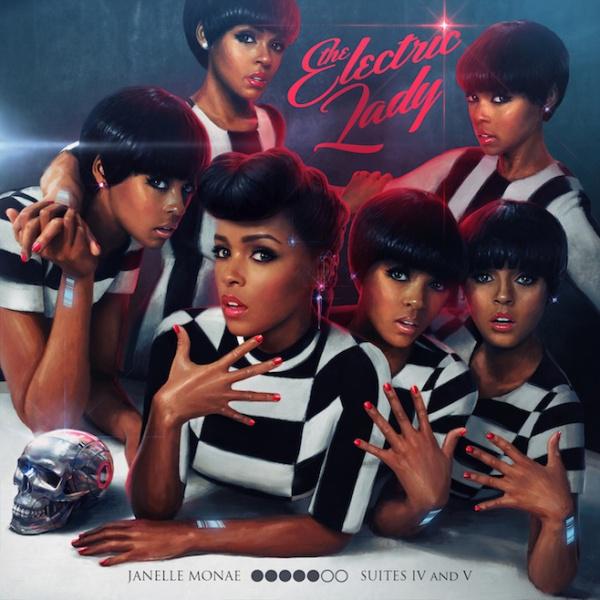 There’s something startlingly cinematic to the work of Janelle Monae. Part of this is certainly attributable to her narrative ambition. Her entire output thus far has been part of an ongoing story, The Metropolis Suite, and while her style varies and her skills have improved over the course of that work’s first five suites (first on her EP, Metropolis: The Chase Suite, then on 2010’s The ArchAndroid, and now on her newest, The Electric Lady) it has remained consistent in its narrative. Yet perhaps more importantly, Monae knows how to create a mood, and through that mood, a setting, better than just about any artist currently working. Monae’s music is an alluring blend of rock and funk, and on The Electric Lady some R&B and psychedelia as well, but it situates listeners exactly where Monae wants them and envelopes them within her soundscape. It doesn’t just involve the listener, it transports them to a utopian future and makes them a part of that society. In her career so far, Monae hasn’t just created a musical style that is exotic and immediately inviting; she’s created an entire world and left the door open for you to follow her inside.

Opening track “Suite IV Electric Overture” feels like a mixture of Ennio Morricone’s sweeping bravado and Shirley Bassey’s subtle seduction. The song could serve as the build up to a stand-off in a neon-lit utopian future or the score for a Bond theme fairly easily, but it immediately reorients us in the world of Monae’s alter-ego, android pop star Cindi Mayweather. Like all great science fiction, Monae’s work is powerfully allegorical, and the swells of this opener prime us for the battles to come. The Electric Lady trades in themes of black empowerment, gender politics, and feminine sexuality, announcing itself as a bold political statement that doesn’t miss a step musically. This is Monae’s most personal work to date, but that never means it is a dour or introverted work. She’s got things to say, to be sure. It’s just that one of those things is always going to be “Have a good time.”

Monae has been anointed as a major force in music since her debut, and she both earns that every step of the way and uses it to her advantage, collecting an incredibly impressive guest cast. “Give ‘Em What They Love,” features Prince and simultaneously channels his Purple Rain-era sexual aggression and makes it clear that not even a superstar can steal the spotlight from Monae. She is indefatigable, indomitable, and completely unstoppable, a sonic force of nature periodically unleashed to remind the rest of music how unimaginative it can be.

Though her music has always looked to the future, it is also inextricably linked to the past, mining various genres and touchstones to move forward and take them in new directions. The Electric Lady explicitly references this past with tracks named after Dorothy Dandridge (the first African American actress to be nominated for an Oscar) and Sally Ride (the first American woman in space), and seems to incorporate the sound of such legends as Jimi Hendrix at moments.

When David Bowie became Ziggy Stardust, he transformed himself into mankind’s potential savior, an otherworldly messiah sent to deliver man to salvation. Cindi Mayweather, on the other hand, is an android, kept down by a society that refuses her agency and oppresses her kind. She too wants to deliver salvation, but hers is a grassroots movement rooted in her own experience and (despite her status as an android) humanity. Bowie came from above to show us all the way, while Monae comes from among us to make us recognize she’s no different. Monae is a gifted and brilliant songwriter deeply dedicated to the theatricality of her creation, but she is also intelligent about the resonance of her story to her own life. Bowie disappeared into his creations; Monae’s is proving to reveal her.

The album is interspersed with interludes set at a call-in radio show that allow Monae’s political messages to become a bit more explicit, but these are never didactic—far from it, in fact. The call-in host is a smooth, playful presence dedicated to keeping his show fleet and fun. He doesn’t disregard his callers’ opinions, but he will only let them go so far before he insists that the party resume.

“Q.U.E.E.N.” has guest star Erykah Badu, who brings her strong presence without, like Prince before her, taking away from the real star of the show. “Primetime” slows things down for a late-night duet with Miguel. It’s a loose, sexy song that elucidates the album’s overall approach to physicality. Where The ArchAndroid was often detached (usually to its benefit), The Electric Lady oozes feeling, begs listeners to touch it, to groove with it. The album’s stand-out single (the most obvious comparison is “Tightrope” from the last record) is “Dance Apocalyptic,” an effortlessly energetic dance song, which races along with a reckless abandon that is an absolute blast.

“Suite V Electric Overture” returns to that sultry Bassey sound but ushers in jazz for a frenetic feel that transforms the story and shifts it into its next movement. “Sally Ride” is a soulful requiem to its titular dreamer and explorer, who died just last year, a beautifully sad and ultimately deeply powerful belter for the vocally acrobatic Monae. The album closes with “What an Experience,” which doubles as a commentary on everything we’ve just gone through and an ode to the moment you abandon yourself to love. Though he’s absent this time, Prince’s influence suffuses the track, and the album closes on a bittersweet, beautiful note. The party is over for the moment, but goddamn was it a good time while it lasted.

Monae is known for being obsessive and detail-oriented in her writing and recording, but the highest points of The Electric Lady are those that celebrate letting go and abandoning yourself to a sound, a movement, a person, a party. She has made a career cloaking herself in an alter-ego, yet her best album yet is the one on which she reveals the most of herself. This is a powerful work, with important, resonant messages and a blindingly immersive narrative scope, but its also one of the most fun albums of 2013 so far. That’s the magic of the story Monae is telling us, and her message is one to take heed of: the march toward progress is slow, but it is inevitable, and it doesn’t have to be dour or furious. Throw the best party in town, and everybody is going to want to come.