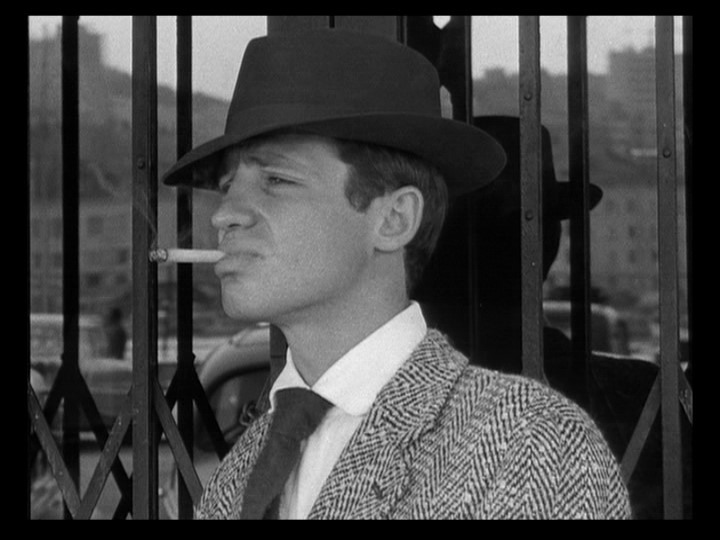 The French New Wave is one of the most influential movements in the history of cinema. For roughly 15 years in the mid-twentieth century, a small band of iconoclasts, critics, misfits, and eccentrics took everything that was known about film and flipped it on its ear. Riding The Wave will try to contend with major works from the era, put them in a social and cinematic context, and generally just hold on as we careen through the films of a time and place where truly anything was possible.

The French New Wave was founded, as we discussed last time on the twin tenets of personal expression and devout cinephilia. It’s earliest directors made movies because they loved movies, and because they thought they had something to say that hadn’t yet been expressed through the medium. The reason the French New Wave became a movement rather than just a series of films is because they were right.

Where The 400 Blows focuses more explicitly on Truffaut’s personal expression, telling a semi-autobiographical story of his misspent youth, Jean-Luc Godard’s debut feature Breathless is the beginning of a wild love affair with film itself, the dawn of a decade in which Godard would tear apart and rebuild the medium, examining cinema through cinema and deconstructing tropes, genres, and movies themselves in the process. If The 400 Blows began to build the structure of the French New Wave, Breathless takes a match to that structure, and more, to structure itself. The film opens with Michel Poiccard (Jean-Paul Belmondo) stealing a car, but what we are really watching is Godard hijacking a genre. Over the course of the film, he will crib from John Huston, mimic Humphey Bogart, pay homage in the film’s dedication to Monogram Pictures, and generally run roughshod over any notion of a criminal on the run we may have. Michel romances Patricia (Jean Seberg), an American expatriate, but the message this imparts is far bolder than the simple story of a doomed love. Godard is making it clear: “I’m coming for your clichés, for your tropes, for your women. I’m coming for film itself.”

Godard shoots the film like a documentary, a technique that has become mainstream but was unheard of at the time, using handheld cameras and all natural lighting. To add to the realism, he shot in incredibly long takes, and when asked to trim the film down, he pioneered the jump cut, giving the film its propulsive feel and simultaneously underlining the frenetic nature of Michel’s life. Our hero is a cockroach fleeing from the light, darting from shadow to shadow with little more thought than finding more shelter. The film is a constant surge, its pacing burgeoned by the quick bursts of music and by Belmondo’s hurried asides to the camera. He addresses the audience directly (breaking the fourth wall is a large part of Godard’s major point about the artifice of film, and the director takes great pleasure from mining its inherent unreality for his own clever gimmicks), because his message is one for us. That Michel kills a policeman early in the film is no surprise; Godard was doing no less than gunning down French authorities, thumbing his nose at their conventions and blazing his own path, ignoring their restrictions as Michel ignores the law.

Breathless was shot on location throughout Paris with no permits, permission, or previous notice. Godard worked from an outline written by Truffaut (who had originally planned to turn a news story about a small time hood who stole a car and killed a cop en route to visiting his sick mother, but turned the project over to Godard), but wrote and filmed in a largely improvisational method. On the first day of filming, Godard met the crew and shot for two hours, until he ran out of ideas. From there, shooting days ranged from 15 minutes to 12 hours, with Godard writing dialogue on the spot, rehearsing briefly with the actors, and then just shooting. Paris becomes a character in the film, the wondrous playground on which Michel is leased, the staid old-fashioned city he disdains for its squareness and longs to flee. Michel wants to leave Paris for Rome, and while Godard’s anarchic spirit colors every frame, he shows clear devotion to the City of Lights, even as he scribbles his own vision across it, virtually tagging the city with his film shot on the fly.

Godard was the last of the notorious five Cahiers du Cinema directors to begin a feature, and New Wave staples like The 400 Blows and Resnais’ Hiroshima Mon Amour (which we will get to in time) has already achieved massive success at Cannes in 1959. It speaks to the power of the film, and to its madcap energy, that Breathless is still considered one of the opening shots of the New Wave and one of its cornerstones. Godard mastered the mixture of anarchic aggression and measured nonchalance, embodying these in his violent yet detached and image conscious main character.

The performances are key here. There is no Michel Poiccard, or at least not one who has burned his way permanently into our cinematic consciousness, without the irrepressible charm of Belmondo. He manages to make Michel’s casual sexism, slothful lack of motivation, and proneness to violence feel like more than just tics, more than the sum of the references that constructed his character. Similarly, Jean Seberg must play her way through a role that demands her to be both ingénue and femme fatale, in addition to weathering Godard’s problematic view of women, and yet she shines. Seberg is effortlessly charming, aloof when necessary and startlingly present when Patricia is actually engaged. This is a woman finding herself in Paris, by both assimilating and carefully contrasting everything around her. That she gets caught up with Michel, who hates France even as he embodies the French, makes perfect sense. When Godard allows a large portion of the film to unspool as the two laze around Patricia’s apartment, these actors make their characters come to life. It isn’t Godard’s best extended apartment scene (for that, look to Contempt, perhaps my favorite of his films, and one we will almost definitely address at some point later in the feature, if only because I can’t keep from dissecting its brilliance), but it allows the characters to breathe in a way the propulsive remainder of the film cannot. Before we can care what befalls Michel and Patricia, we must come to understand and appreciate them, and without Belmondo and Seberg, this would be impossible.

Godard was blessed with a rare combination of glee at making a movie and confidence in its execution. He simultaneously possessed the pretension to believe in his own greatness and the skill and verve to ensure it. It is no wonder Breathless is remembered as giving birth to the French New Wave. The film is (I can’t help myself) a breath of fresh air, a stream of endless invention and energy that is flat-out invigorating. This is an opening shot fired by a man who knows his way around a bullet, a bold, passionate thesis statement paving the way for what is to come. I wrote about Godard’s phenomenal run of films from 1960 through 1967 previously , and should Riding the Wave endure, I imagine we will have time to visit some, if not all of them. Over these seven years, Godard took it upon himself to process all that had come before him and to produce something new from it. He studied cinema through cinema, and in doing so, became one of the most vital voices in a movement that reinvigorated the medium and pushed things breathlessly forward. After this, it was impossible to look back.

Coming up on Riding the Wave: