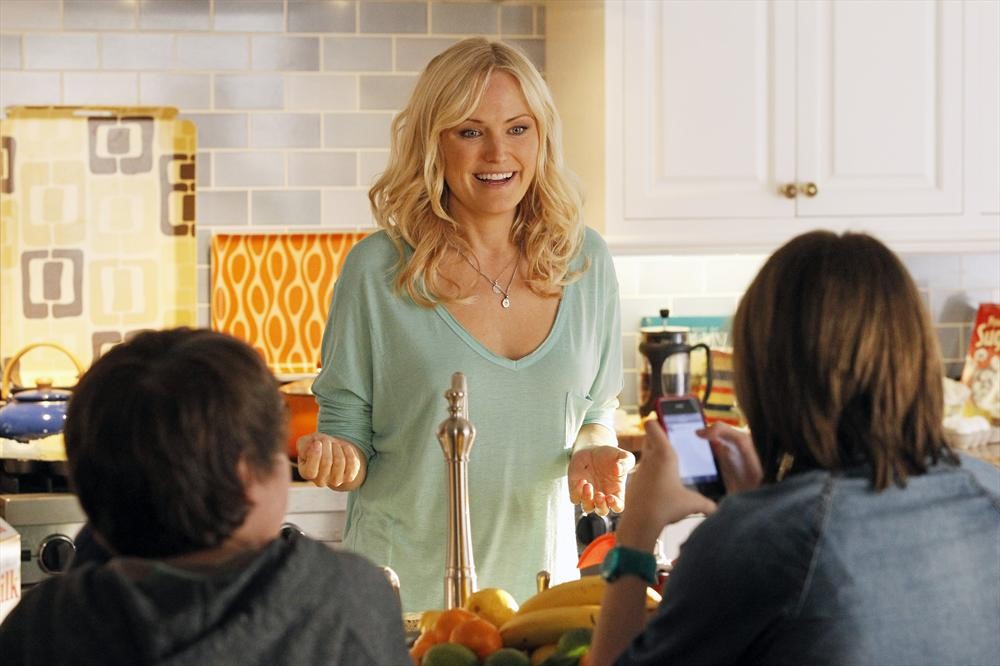 Building a fully realized world in a pilot is a virtually impossible proposition. Doing so in a sitcom is even more difficult, though, both because you only have 22 minutes of air time, and because there’s an attendant expectation that you will be funny. It’s easy to forgive some messiness in a funny pilot, but being funny with next to no context is an incredibly difficult thing. Which makes Trophy Wife, the best comedy pilot I’ve seen yet this year, all the more enjoyable. This is a pilot that does a lot of dangerous things for a comedy coming right out the gate and manages to pull almost all of them off. It throws way too many characters at us, but makes them all funny and realistic (enough). It has multiple plotlines that all intersect in a madcap climax, but it bothers to make each of them work on its own as a story and seems to have put thought into how they might come together. It trades in some obvious stock types and predictable gags, but only when it is confident in its ability to make them work as laugh generators.

It helps that Trophy Wife has a very solid and incredibly game cast. Malin Akerman stars as Kate, a young woman who trades in single life for a marriage to the much older Pete (Bradley Whitford), and gets his three kids and two ex-wives as part of the package. The set up for all of this is a whirlwind of expositional brilliance that moves so quickly, you barely recognize you’re being spoon fed at all. The pilot script, by Emily Halpern and Sarah Haskins, is a marvel at situating us inside Kate’s life without ever feeling too writerly or invasive. Halpern and Haskins trust that we’ll keep up, and that faith in the audience gives them the room to pepper the script with actual comedy.

The show also seems to have an immediate sense of how to use all of its players. Akerman is an incredibly broad actress, given to emoting to the rafters and flailing about manically, but this works for her character, who is in over her head and trying to force everyone in her life to take her seriously in her new roles. Trophy Wife smartly counterbalances her with the delightfully dry Whitford and the Queen of sarcastic understatement Marcia Gay Harden (who plays Diane, Pete’s first ex-wife). Into this soup is thrown Michaela Watkins’ Jackie, a loopy new age type who brings a less mannered type of mania to the proceedings. Perhaps the perfect place for Akerman to shine is amidst a bunch of diverse talents who know how to modulate themselves to her excess, and in fact, everyone here seems perfectly pitched to their interactions with everyone else. Watching a cast coalesce into an ensemble is one of the true joys of viewing a sitcom in its early days, but Trophy Wife’s team comes already blended to perfection.

This is evident in the way the show is already finding weird and interesting ways to pair up the characters. Tonight we watch Pete and Jackie try to cover up for the fact that they killed both of their son Bert’s (Albert Tsai) hamsters, we see Kate and Diane bounce off each other in a meeting with Warren’s (Ryan Lee) teacher, and we enjoy Bert as he outplays Kate’s best friend Meg (Natalie Morales). Most shows rely on a few key core relationships in their early going and build out from there, but Trophy Wife is confident enough in its characters and their inherent comedic value it is playing mix-and-match in its very first episode.

Nothing in this pilot is particularly new, but it all manages to feel fresh and funny because of a strong sense of perspective and an incredibly game cast. If the largest complaint I have about a pilot is “I’ve seen a lot of this before” (something that is true of virtually every pilot, even a lot of the best), it’s likely something very special is in the offing. The show could use some tinkering, but it’s inevitable that this will happen over the course of the first season, and it may live to regret its title (like its former network mate Cougar Town has for going on five seasons now), but this is a strong, confident, assured pilot. And more than that, it’s a very, very funny one.

-I can’t possibly commit to reviewing a third show on Tuesdays (I’ll be writing about Brooklyn Nine-Nine and Agents of S.H.I.E.L.D. every week), but I truly want to continue to watch this show grow toward greatness. I’ll be watching, and so should you.

-“Do you mind if I just try a modern healing technique called science?”

-“You’re not even a real grown up. Your car is full of garbage and shoes.”

-“Are you…um…excited for Daylight Savings?”