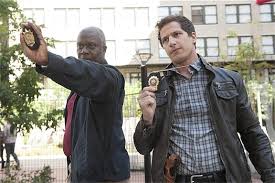 To a certain extent, the second episode of a show has to repeat the pilot. If the show did well, it always expects new viewers in the second week, and needs to keep them up to speed. If it didn’t do well, it’s hoping people who missed it the first time out won’t feel left in the dark. And because pilots are usually shot well in advance of further episodes, it is useful to reorient the cast and crew to exactly what they’re all doing. So “The Tagger” basically hands us a redux of last week’s pilot. It gives Chelsea Peretti slightly more to do as Gina, but it presents basically the same exact conflicts with plotting that is less deft and jokes that aren’t nearly as fast and furious in their delivery.

Peralta and Captain Holt are still in conflict because Holt wants Peralta to be a better cop and Peralta wants to retain his “lone wolf” style. Boyle is still in love with Diaz but not sure if she reciprocates his feelings. Jeffords is still emasculated, Santiago is still ambitious, and Gina still doesn’t really care about anything going on at the station. This would be true whether or not the episode was a repeat of the pilot, of course, and it would be even more jarring if we came back for the second episode and everyone acted completely different than before. What is disappointing about “The Tagger” is not that it doesn’t give us anything more than the pilot; it’s that it gives us less.

The episode finds Peralta on the trail of the titular vandal, who is drawing penises on the side of police cars. When he discovers the tagger is the Deputy Commissioner’s son, he is torn over whether to process the arrest. From here on out, you can literally recite the plot, even if you haven’t seen the episode. Peralta hems and haws, the Deputy Commissioner shows up and takes his son, and Peralta decides to chase him down and arrest the kid. In the process, he earns a modicum of Holt’s respect, though the end of the episode reassures us these two will still have conflicts going forward.

“The Tagger” exhibits an utter lack of confidence in what the pilot sold us, not just in how repetitive it is, but in the ways it repeats things. Andre Braugher is an incredibly talented actor, but even he can only come up with so many variations on the “be a better cop” speech, and they are already wearing thin. The B-plot is also a retread, with Boyle being a sad sack, Diaz a hard-ass, and Santiago a climber. The three barely even seem to be sharing the screen together, even as Boyle is pining for Diaz. They seem to be there strictly to underline their stock types.

This is probably just an off week for Brooklyn Nine-Nine. “The Tagger” falls into the trap that many, even most second episodes fall into. And honestly, if more of the jokes had landed for me, I probably would have overlooked the fact that this is the pilot with a less complex plot and a more narrow conception of its characters. It isn’t that “The Tagger” isn’t a funny episode of television. It just isn’t funny enough to cover up for how lazy and unimaginative it feels. I hope this is an aberration for the show, an early and completely understandable misstep, and that next week, my faith will be fully restored. This is a great cast who have already proven themselves to be very, very funny. I just hope Brooklyn Nine-Nine remembers their range and capability going forward.

-“I was three minutes late so you’re going to call me out in front of everybody?” “Good idea. Everybody, gather round. In front of Peralta.”

-“Oh that’s what he’s been drawing! But what are those two little round things at the bottom?” “It’s the butt.”

-“Thank you, Carlene. Your whole life is garbage.”

-“You know what they don’t teach you at the academy? Its better to be a criminal.”

-“Well, I hope you find something to do tonight. I’m gonna pee. That’s what I’m doing tonight. NOPE!”

-“Has anyone ever told you you look like a statue?” “Yes.”

-“So you’re suggesting police brutality?” “Hahaha, yeah, I guess so. What’s your point?”

-“Terry loves yogurt.” Braugher makes a line like this land.