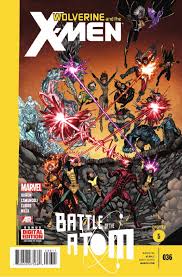 Wolverine and the X-Men #36
Publisher: Marvel Comics
Writer: Jason Aaron
Penciler: Giuseppe Camuncoli
Finisher: Andrew Currie
Colorist: Matt Milla with Edgar Delgado
Letterer: VC’s Clayton Cowles
Sometimes, in comics, you’re going to have a psychic battle. By its very nature, a psychic battle is going to look, from the outside, pretty boring. It’s probably going to mostly be a bunch of people standing around with their eyes closed. Internally, however, the psychic battle provides a huge opportunity for wild creativity. It is a fight taking place entirely within some of the most powerful minds on the planet, and this means that the sky is the limit. In terms of artistic rendering, the battle between “Xorn,” Jean Grey, Emma Frost and the Stepford Cuckoos in Wolverine and the X-Men #36 leaves something to be desired. It mostly looks like a regular fight sequence with some innovative coloring.

Yet the psychic battle does get something very important right. While the art depicts this as a bunch of telepathic punches, Jason Aaron’s writing gets at the core of what makes this type of conflict so fascinating. This group of people is fighting at the core of their being, attempting to expose each other’s most personal thoughts and weaknesses and aiming to exploit their foe at the most basic level: by undermining what makes them themselves. Aaron captures the stakes of this perfectly as the fight becomes narrowed to a battle between Young Jean and Future Jean, and these two perspectives shape the central conflict of the Battle of the Atom event better than anything to date.

Young Jean Grey, and in fact, all of the time-displaced original X-Men are fighting for agency in a way the X-Men have been from the start. They don’t want their futures to be dictated for them, especially when they might end up like the dysfunctional versions of themselves they see around them. They want to be able to choose their own paths, to become who they want to be absent anyone else’s interference. This is a great metaphor for the X-Men in general, and it is housed in the perfect characters: teenage versions of the X-Men. As a teenager, everyone wants to be independent, to be in control, to make their own choices. It’s just that, for the original X-Men, their decisions may have massive consequences.

This is always the premise behind time travel stories in X-Men comics, but Jason Aaron captures this idea incredibly well. Old Jean almost certainly has ulterior motives at this point, but the argument she’s making is an empathetic one: I made mistakes in my youth that I’d take back if I could, and I’m trying my best to make things right. Combine that with the wonderful speech Deadpool gives as he feigns his own attempted suicide, and the motivations for the band from the future feel more plausible than they ever have in the past. Which, of course, makes the inevitable reveal that they are lying all the more effective.

Battle of the Atom is still largely following a template. We’ve finally reached the point where characters from our present (here, Magick, along with Past Bobby and Past Hank) go into the theoretical future, and they seem to discover a utopian paradise—until they are confronted by a future version of the X-Men that seems far more vibrant than we have been lead to believe. This is all expected and a little rote, but the X-Men time travel story rarely deviates from its expected course. There’s a sort of comfort in the rhythms of this story, and its structural stasis is probably one of the reasons X-writers return to it again and again. It establishes stakes and allows for the writer to toy around with basic moral questions that he or she can tweak as they see fit. Jason Aaron simply elevates the material by more effectively communicating the stakes. Wolverine and the X-Men #36 proves once again why Aaron is the best writer the X-books have at the moment, and it’s a shame he is only writing one further chapter of this event. In this issue, he indicates just how great Battle of the Atom could be. Here’s hoping his co-writers grab the baton and run with it.