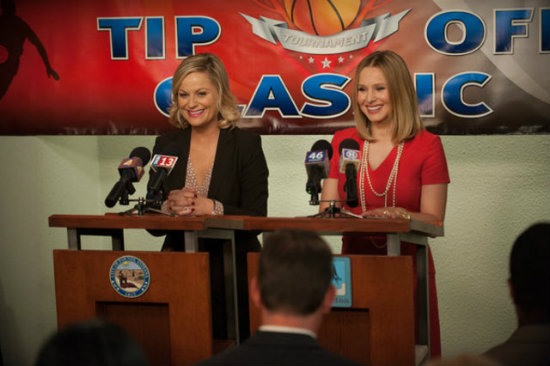 Leslie Knope is being recalled. Parks and Recreation is trying to make its audiences care about this, but compared to Leslie’s campaign and the Harvest Festival, it feels like an empty threat. Not so much in that Leslie can’t be recalled, it just doesn’t feel like there are really any stakes. If she actually is kicked out of office, what, she’ll go back to the Parks Department – sad, but things could be worse for the show. That’s why “The Pawnee-Eagleton Tip-Off Classic” feels like a needed diversion. It felt like an important episode, but maybe not a great episode. Ben and Chris have been called on to audit Pawnee’s rival town to see how they’ve mismanaged funds. After all, they’ve got Michael Buble on retainer. After meeting with Leslie’s Eagleton counterpart, Ingrid de Forest (played with waspy conviction by the always welcome Kristen Bell), they discover that the once wealthy town is flat broke. Viewers should know early that any of Leslie’s schadenfreude would be short lived. She basks in the failures of Eagleton, partially because of her Pawnee loyalties and partially because it makes her look better in the recall.

“The Pawnee-Eagleton Tip-Off Classic” had two other storylines, neither of which proved to be particularly compelling, though the episode was still fairly funny – something that’s a comforting pattern of Parks even in its sixth season. Ron is trying to get “off the grid” with the help of Tom and Donna after receiving a Pennysaver at his house that he shares with Diane. He goes to great lengths trying to wipe his name from all records. He destroys his credit cards, sternly tells the mailman to stop delivering such garbage to his house and even removes his photo from JJ’s wall as he was honored for his mythical consumption of eggs. In the end, as he’s trying to purchase an RV to serve as his new home, Ron is caught by Diane and she scolds him as she should because he’s now a father, and he’s needed by his family. No harm, no foul here. It’s in line with Swanson’s character, but the resolution feels so quick and tidy that the rest of the episode seemed like kind of a waste of time. Speaking of wastes of time, Ann takes April to a Vet school and surprisingly April backs out, feeling in her gut that she shouldn’t go there. Other the Aubrey Plaza continuing to nail April’s need to put down Ann, this offered very little other than setting the Ann/Chris exit into motion.

While Leslie is ready to watch Eagleton burn, she learns a lesson, quickly and conveniently while watching the high school basketball game between the rival schools. She succumbs to her Leslie Knope heart of gold and realizes it would be best for Pawnee to help Eagleton. The decision is made to have Pawnee absorb Eagleton, lifting some of the financial burden off of the struggling town. The decision to merge the towns has the potential for some fun; injecting new life into the Pawnee electorate, which we already know is insane, but it gives the writers new space to explore. It’s as if Springfield has taken on Shelbyville and just think of all the new characters there are to explore in this new place. Yes, the Ron and April/Ann B and C stories felt a bit like filler, but the episode ends with an intriguing new plot that is more interesting than the recall and should provide a new look at Eagleton over at least the next few episodes.

-In the bet before the high school game we get to compare worm-filled apples to $700,000 dollar oranges

-Ron’s only subscribed to two magazines his whole life – Reader’s Digest and Ebony. Ebony was due to a clerical error, but provided an interesting year.

-Just throwing this out there, Donna’s earned her own episode, right? Maybe a B-plot that she didn’t have to share with someone else? Retta can do it.

-Lots of great uber-rich jokes the writers seemed to have been bottling up for more Eagleton – Bell tips with 100 euros, they have a budget brunch and are made late by Michael Buble, who went long and they also somehow have Chris Bosh on their basketball team.

-“Why should I bail them out with my unemployment check?” Pawnee’s angry citizens are the best.

-“Sometimes I wish you went down in the Titanic with all your sorority sisters.”

-Love the idea that the Eagletonians find talking about money gauche – at a budget meeting.