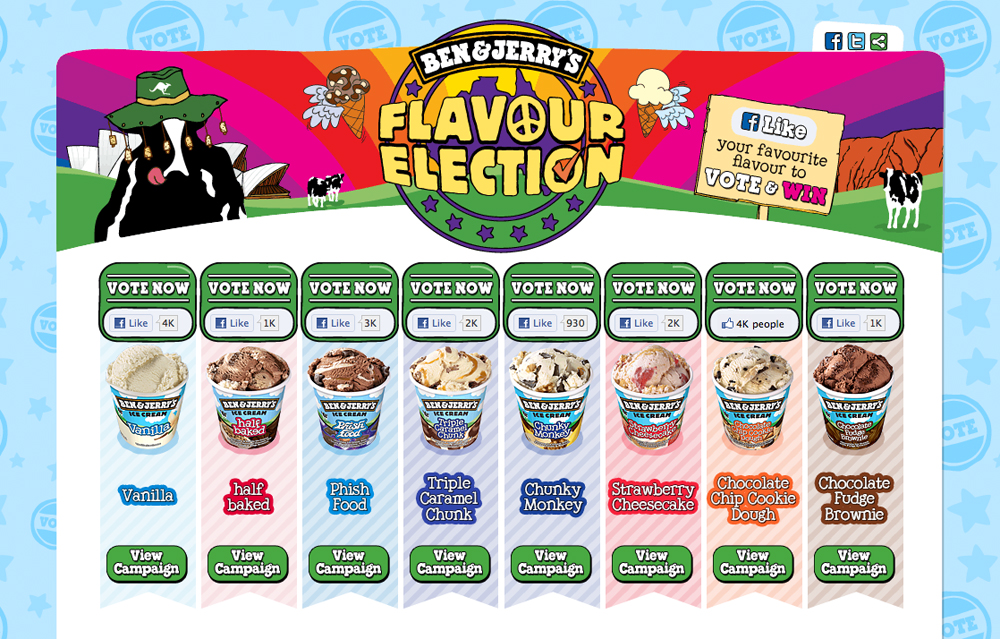 Game of Thrones always seems worth celebrating, so my contribution is “Red (Velvet) Wedding Cake.” Beside the red velvet, it contains all of George R.R. Martin's favorite desserts, ranked by how purple the prose used in their descriptions. It tastes like ashes in your mouth and the tears of a thousand fanboys and girls. Also comes in low-fat, for those of us who are a head short of their ideal body-type.

After one of my favorite episodes of Parks and Recreation, someone with a much better understanding of Photoshop than I rigged up a brilliant picture of a tub of Ben & Jerry’s plastered with Ron Swanson’s stoic mug, featuring a flavor named “All the Bacon and Eggs You Have.” I know this isn’t my idea, but I wanted to celebrate its brilliance a little bit: one of the things that works so well about this is the fact that most ice cream is already made with a shit-ton of eggs (all custard based ice creams, the most popular kind in America at least, have somewhere between 4-8 eggs per gallon), and if you haven’t tried chocolate covered bacon, you are absolutely missing out. There is a restaurant in Austin, TX that serves a gorgeous slice of candied bacon completely coated in chocolate that will bring you to your knees. It should also have Scotch in it, which could only make it perfect, as everything goes with Scotch. I keep imagining this pint, and then also drooling a lot.

If I were to create my own, though, I would either make a Pecan Pie ice cream (to be said in a strange voice only) for Harry Burns from When Harry Met Sally, which would be a whiskey flavored ice cream with candied pecans and bits of chocolate covered pie crust, or I would attempt something a bit more savory for our good Dr. Hannibal Lecter--perhaps a red wine chocolate ice cream with candied favas and some chocolate covered liver. Call it “Have the Lambs Stopped Screaming?” I think it’ll be a huge seller.

A classic example of “you snooze, you lose,” both of my initial ideas—Red (Velvet) Wedding and All the Eggs & Bacon You Have—have been taken. Although I think the flavor profile I was imaging for Red (Velvet) Wedding is a bit differently and decidedly less bitter than Michael’s recommendation.

Unsurprisingly, if you’ve ever listened to the podcast and heard Jordan and crew malign my character, my favorite Ben & Jerry’s flavors have a tendency to be alcohol themed (I mean, have you TRIED Dublin Mudslide and Black & Tan?). So for my ice cream flavor, I’d go with an Old Fashioned flavor. Start with a bourbon ice cream (BECAUSE THAT IS A THING THAT EXISTS IN REAL LIFE, AND IT IS GLORIOUS), then add maraschino cherries and bits of candied orange peel and voila—a masterpiece. The primary point of reference here would be Bourbon Whiskey, the greatest American triple threat (movies, music, and TV!), but if I had to put a more specific point on it, it could be Don Draper themed (and accompanied by some sort of Roger Sterling Stoli ice cream that would probably also be amazing….).

A close runner up would be Lemon Lyman, as based on my very favorite character from The West Wing, one Joshua Lyman. It would be made up of a sweet cream ice cream (this is not a sorbet, damn it), with graham cracker pieces and a lemony custard swirl.

Both simple, both classic, both delicious. Someone get on production, please.

There are few non-cooking shows in the history of television with a greater appreciation of food, and sweets in particular, than Twin Peaks. So, in honor of some of that show’s favorite culinary predilections (and one of its most sinister locations), let’s take a trip to the “Black (Forest) Lodge.” Agent Cooper loves little more than coffee (“Damn good coffee! And Hot!”), so the base is going to have to be java ice cream, filled with graham cracker crusted cherries (representing both an essential ingredient in Black Forest cake and in the Double R Diner’s specialty: cherry pie), a whipped cream swirl, chunks of chocolate cake and a smattering of chocolate shavings. The mixture of the coffee-base and the cake ingredients might clash, just a little, but something tells me this flavor, like the town it honors, will be more than meets the eye. Ideal slogan? “The Ice Cream Is Not What It Seems.” Maybe we can even get Ray Wise to do the commercials.

I think dessert should be as fun as it is delicious. I would love it if there was an Orphan Black-themed ice cream that you buy and it comes in one of seven or so flavors, but you never know which one you're going to get, Bertie Botts-style.

In the realm of the more realistic, a Bluth's Frozen Banana ice cream, complete with chocolate and nuts. Mr. Banana Grabber could be on the tub. I'm gonna be honest, I don't really like bananas, frozen or otherwise. Why would I want to design a banana-themed ice cream when I have no intention of ever eating it? For that matter, isn't there already a banana Ben & Jerry's flavor? Those are the kinds of questions I don't want to answer. Also, the ice cream tub would be lined with money.

Note: Unfortunately, our brilliance is sometimes a finite resource. Send us your ideas for future installments of Random Pop Culture Question of the Week on twitter @reviewtobenamed (follow us reviewtobenamed@gmail.com.