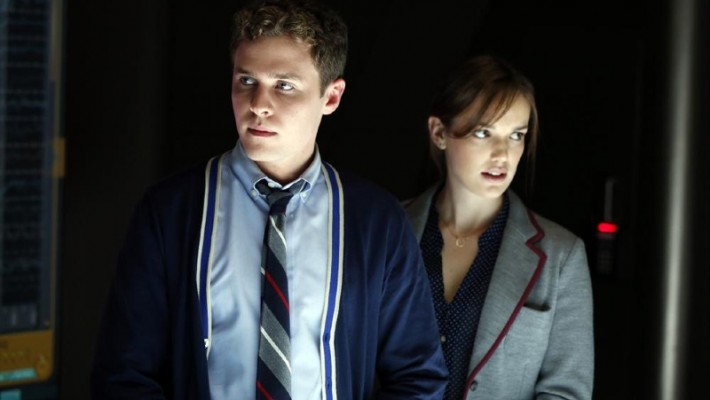 It’s clear, in hindsight, that “F.Z.Z.T.” is the episode where Agents of SHIELD is supposed to get good, where its characters are supposed to start mattering to us in the audience. The show takes the standard Whedon tack with this, throwing a member of the team into mortal danger to make the rest of them confront how much they matter to each other, and even throws in a subplot about Coulson’s resurrection trauma to boot. But “F.Z.Z.T.,” and the show it represents are in a large sense still ciphers, empty husks going through the motions of emotions and the steps of a plot that would matter much more if we cared at all about the people it is happening to.

The biggest problem for this week’s episode is the flatness of Fitz and Simmons as characters. This is the character-focused episode I’ve hoped for previously, an episode intended to bring depth and resonance to the empty bickering that characterizes the Fitz-Simmons bond, but it doesn’t work largely because there is no foundation for the drama to build from. This sort of episode can take a character, or an ensemble, to the next level, but only if there’s been more laid out to build from that we’ve seen here. We know so little about Fitz-Simmons outside of their being geniuses, and the backstory they are given here is so bland and texture less, it is hard to completely invest in them, even when things get very dark.

Think about what we learn tonight, as both believe Simmons is about to die. We discover that they…have worked next to each other for a long time, that Simmons wanted to see the world, and that they really like each other. The moment when Fitz rushes into the quarantined lab, or when Simmons bashes him with the fire extinguisher, should have huge emotional resonance. Our characters are putting themselves in mortal danger for the good of their team, after all, and if that doesn’t give us a surge of empathy, then what will? Yet it never really feels like it should because the people at its center never register as anything more than plot mechanics. In an episode clearly intended to focus on characters, the characters feel like cogs in a plot machine built to serve them. It’s all a little confusing, honestly, but mostly it’s disappointing.

Part of this problem is surely Elizabeth Henstridge, who doesn’t seem anchored to her character even when she is crying and preparing to die for her teammates. Her banter with Fitz never feels truly genuine, and the higher the stakes get, the more the runner of her correcting Fitz (its an “anti-serum,” not a “vaccine” guys) is left to just flail around in the middle of the script, like the attention-seeking younger brother of a joke that actually worked. Neither Henstridge nor Ian De Caestecker bring enough charm to the roles to make their fun, zippy relationship work at all. They can’t sell the jokes, and what’s worse, they don’t even feel like particularly close friends. They feel like actors paid to play close friends, and doing their jobs poorly.

To be fair, De Caestecker gets his best moments of the series so far in “F.Z.Z.T.,” and he shows some decent acting chops as Fitz gets increasingly angry. He also nails the desperation of watching Simmons leap out of the plane to a tee. In fact, he is good enough at this weightier material, I found myself actively hoping Simmons would bite it so we could be treated to a darker, less forced version of the character. When I find myself actively hoping a main cast member I am supposed to care about dies so that another main cast member I am told to love becomes even vaguely worth paying attention to, your show has problems, Agents of SHIELD, and they aren’t of the sort a death-defying aerial rescue by Agent Chiseled Jaw And Nothing Behind It can solve.

Agents of SHIELD now has a full season pick up, which means I’ll be here in this space until probably at least mid-May, watching and wondering what decisions I made to get here. The back-nine allows this show’s writers to improve on the problems from these early episodes, and it is almost certainly when a more serialized plotline will kick in. If the plotting gets exponentially better than it has been to date, this show could at least be a fun espionage procedural to watch every week. Yet characters and themes are reasonably important things for a show to develop if it wants to reach the Big Leagues or even stay in my DVR queue, and so far, this show is whiffing on all of those.

“F.Z.Z.T.” is dispiriting in part because it shows that the writers want to add depth and resonance to the characters but don’t seem capable of doing so. When the ensemble was just under-developed, it was easy to scold Agents of SHIELD that it should work on them, but when it presents an episode clearly intended to do just that and it falls this flat, I get more worried for the long-term viability of this series. Absent a plane crash next week that kills everyone but Coulson, May, and Skye (and, honestly, that crash could kill Skye and I wouldn’t care at all), this show will be weighted down by characters who run the gamut from cardboard to grating for the foreseeable future. If future character-focused episodes of the show work this poorly, we are likely to be left with paper dolls in the place of human beings for the foreseeable future.

So Agents of SHIELD has problems. That has always been true. But the more I watch the show struggle with these issues, the more worried I get that the people behind it don’t know how to solve them. And that is truly disconcerting.

-Seriously, this show has an abbreviation problem. I know it makes things sound more officious, but did this episode really need to be called “F.Z.Z.T.”? It’s like they are just trying to irk me at this point.

-Coulson doesn’t wear undershirts? It seems like he would sweat a lot…

-In an ideal world, this notes section would be plum full of fun banter. All I could come up with this week is a pretty weak one-liner from Coulson on a treadmill. This could be a very long season of television, gang…