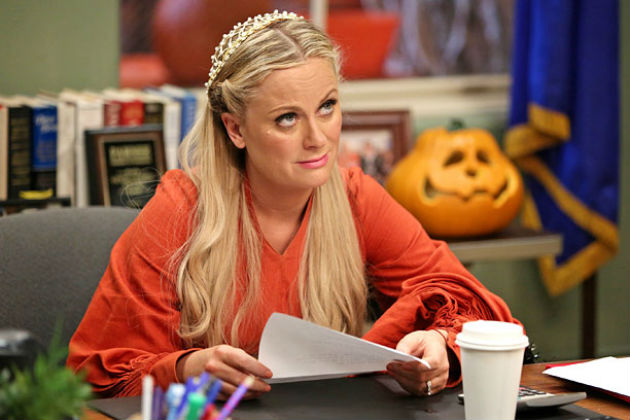 One of many reasons Parks and Recreation has been one of the top comedies on television since its vast season two improvement is its unabashed optimism. It’s optimistic, not just about local government, but about people – at least people who don’t have the last name ‘Jamm’. It’s like the other side of the It’s Always Sunny in Philadelphia coin. While Sunny revels in the nastiness of its core characters, Parks looks for the good. This is certainly not a judgment on Sunny, it’s an awesome show that’s managed to stay funny well past the storied “Season 5 cutoff” that we’ve often spoken about on this site. So far this year on Parks, things have remained solid, but ultimately feel like the end is near. We may not have much Parks and Rec left and this week’s double helping was a needed reminder of why losing the show would sting.

The first, and superior episode, in the double feature had an early 90s birthday, the return of Andy (whose absence has noticeably hurt the show) and a good old-fashioned filibuster. While Leslie just wants to roller skate to REM with Ben, the city council looks to make it more difficult for former Eagleton residents to vote in the upcoming recall, potentially damaging any chance Leslie has at holding her seat. At the roller rink, April and Andy are together again as Andy gets a day off (just one day? Boo!) from his gig in London. Tom is getting his flirt on with Nadia, who is about to go off to Rwanda saving people’s lives and stuff. Way to ruin tom’s plans! Ron and Donna share some screen time, a genius move, as they play an arcade hunting game that infuriates and grips Ron.

Normally with this many plates spinning, something misses. It’s nearly impossible to service all the characters in a given episode, but “Filibuster” comes damn close. Every plot worked from A-D which is kind of amazing when you think about it. Leslie standing up for voting rights by starting the filibuster was great, as she stood up for her principles even when she found out the support she was getting from the former Eagleton residents was so they could elect one of their own, who was later revealed to be Ingrid (Kristen Bell). Between trying not to pee and rambling about the amazingness of cake, Leslie was the politician we all need, even if we don’t deserve her (a common theme on the show).

Tom and Nadia had no right to work as well together as they did. Tom relationship stories tend to make me shrug, but Tatiana Maslany’s Nadia has someone made me believe the two could work out. Tom schemes to get her a stuffed bear she’s had her eyes on and I was charmed when they teamed up to steal it from Anne. I’m sad that Maslany can’t be a regular, since she would provide a good partner for Tom (and one who isn’t as obnoxious as Jean Ralphio or his sister). The only knock here is the reminder that Tom and Anne once dated (*dry heaves*).

Ron and Donna’s story was slight, but very funny. Ron is a terrible loser and his response to failing at a hunting video game is to kill a real animal. When that doesn’t suffice, he comes back more determined to set a high score and put in the initials ASS because of course that’s what you do. Not much here in terms of story, just plain funny. A patented Swanson giggle was also welcome.

Finally the return of Andy, the relationship between April and Andy has been on of my favorite things on television over the last few years. Andy’s back and he says he’s kicking London’s ass like Chuck Norris, but in reality, he’s old Chuck Norris – a bearded guy whos in over his head. Andy being scared and vulnerable makes total sense. April telling him how nobody knows what they’re doing, they just fake it until they make it actually rang true. I now Leslie and Ben are THE couple on the show now, but April and Andy will always be top. The fun they have together has been a bit lost and it was nice to see them together again. The Andy shaped hole in April’s life was further addressed in the second episode, “Recall Vote”.

Unsurprisingly, Parks gives us the happiest ending we could hope for here, Leslie’s filibuster works, Ron kills virtual and real game and April gives Andy the courage to return to London and Tom has got a date with Nadia from when she gets back. In the current television climate that is powered on grit and darkness, the optimistic glow of Parks is always welcome on my TV.

While “Filibuster” managed four strong stories in a half hour, “Recall Vote” rightfully knocked it down to two given the importance of the recall election. Honestly, I haven’t been particularly interested in the recall stuff this season. Leslie is probably the best councilperson a town could want and I understand the idiot groupthink that comes with Pawnee, but they should really be wiser to how awesome Leslie it. Recalling her may be the town’s dumbest move yet. I wouldn’t say it’s the show’s dumbest decision (Tom and Anne being a thing will be hard to top) but I’m glad it’s over after this week’s vote.

Again, having only two main plots this week was a very wise decision. I guess it was three stories if you count Chris trying to cheer up April, but that amounted to maybe three minutes of the episode. The crux here is Leslie trying to ignore the looming election. The fact that this is ostensibly a Halloween episode is forgivable give the weird scheduling of parks of late. Even though there’s a ton to do for the Haunted Parks Department, Leslie is spilling over with nerves. Lucky for her Ben and Anne are on the case, providing her with all the emotional support she needs.

Meanwhile, Ron is informed by a super pumped up Tom and Donna that his hand made chair has been featured in BLOOSH, a lifestyle magazine that’s is totally not a riff on Gwyneth Paltrow’s GOOP. The totally not Gwyneth Paltrow is Annabel Porter played by Childrens Hospital’s Erinn Hayes. She nails the insufferable “trend setter” perfectly. Ron’s disgust is obvious but Tom begs him to make nice so she would maybe give a plug to Tom’s business, which is in danger of being bought out.

Ron goes on Joan Calamezzo’s show (always, always good news for viewers) to talk about his chair, BLOOSH, and hopefully plug Tom’s store. When we reach the big BLOOSH party, it kind of goes in a predictable fashion. Annabel wants Ron to sell out, Ron realizes that she is kind of a shitty person and that Tom should hold value in his name an not try to sell out to these people. Tom takes that advice and spins it into a solid business deal while selling the company.

Leslie is faced with a similar inevitability when the recall results roll in – she’s lost. I’m sad that Leslie’s been stripped of her position, but glad the show didn’t make up some crazy way for her to win. It had clearly showed this season that this was a very difficult fight to win. Like Tom, Leslie needs to stand up for her name even though she’s spiraled into depression. Ultimately Leslie realizes (with the help of Anne) that while she doesn’t have much time left in office, she can still make a difference. That’s who she is. Leslie Knope gets shit done. It was a bittersweet ending to a solid episode and hopefully the remainder of the season will focus on Leslie (and maybe the show itself) going out with a bang. Part of me wishes she could stay on the city council since its her dream, but I guess it wasn’t meant to be. If the show were to go on, the writers may have a much easier time dealing with her old role in the Parks Department. If Parks and Recreation has taught us one thing, it’s that the person who counts out Leslie Knope has another thing coming. I can’t wait to see how she shows the Pawnee residents the size of their mistake.

Notes: -Love that everybody is still calling Jerry, Larry. Keep that joke alive!

- There’s something extra special about the specificity of Ben’s party request – it’s the EARLY 90’s and roller skates are required to fulfill some weird sexual fantasy he has.

- For as much as I don’t like Jamm as a character, I was pleased with his, “Are you dooking on my chest right now?!”

- Tom’s worried about all the attention Nadia will get in Rwanda: “If I know anything about Rwanda, and I don’t, I bet its full of rich guys who will buy her whatever she wants.”

- April warmed my heart when giving Andy a pep talk, saying he’ll figure it out: “You will too because you are awesome and everyone else sucks.”

- More April: “I made you five bologna sandwiches in case you get hungry on the way to the airport” – she also uses cookies instead of bread

-Larry’s ill-timed “I got pizza” song was perfect

-Leslie comes into the office sporting a Garfield “I hate Mondays” with a Paunch burger.

-Drunk Ben and drunk Leslie may have been the highlight. Getting matching tattoos is always a smart way of dealing with your problems.

-April begrudgingly acknowledging the cuteness of Anne and Chris together was nice, but short lived.