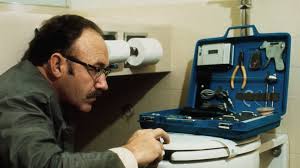 Let's face it: sometimes you need something to keep you busy between seasons of your favorite show, and for that, we turn to Netflix Instant. This bi-weekly feature will give readers a head's up on what's playing—from classics and deep cuts not to be missed, to new films and TV shows that have just arrived—so that you don't miss anything good. We'll even tell you if we see something particularly awful, so that you don't have to waste your time.

Whenever I’m faced with my ever-growing Netflix queue, I have to keep reminding myself that there is no way I’ll ever get to see everything ever made. It is just an impossibility: I’m not independently wealthy, and therefore must do other things in order to be able to watch a few films a week, and I’ve only been on the planet for 30-odd years, while films of all shapes and sizes and technologies have been made for well over a hundred, and continue to be made in staggeringly high numbers. I’m at a natural disadvantage, and that is something that I have to deal with. But days like today remind me that the greatest thing about this “problem” is that there are still so many genuinely wonderful films that I will get to see for the first time (and some of them will even be free of spoilers). Today, the film that has made me feel this way is Francis Ford Coppola’s The Conversation.

I didn’t know anything about this movie before I started watching it, and that is part of what made the viewing experience so great. I know that part of my job here is to recommend movies, but it is always difficult to walk the line between telling you what is so great about a film without telling you everything about it, and at the risk of spoiling this one, I’m going to try to give you the bare bones. But if you love movies, just take my word and stop reading here and go watch this one.

But if my enthusiasm isn’t convincing enough, here’s a bit about the plot, and why this film is still so great even with some unavoidable aging: the movie starts with Harry Caul (Gene Hackman), a surveillance technician who is working with a team to catch the conversation of a good-looking couple as they are walking through a busy park in the middle of an afternoon. While today this wouldn’t seem like much of a feat, the movie lets us know how complicated this had to have been with the limited technologies of the time. Caul, however, is the best in his field, and skilled at adapting to new surveillance techniques and mining them for their possibilities; this particular conversation poses a few problems that Caul and his team are able to overcome easily. The conversation itself also seems innocent enough, and no one on the team seems to know why these two people are being tailed, or who wants the information that is found within the depths of their chat. As the film progresses, and Harry spends more time trying to correct the places where the recording is unclear, he senses something more nefarious at work, and he begins to feel that whatever it is has begun to infringe upon his own life. He starts to get closer to the truth, and what he finds there is genuinely surprising, but the impact to his own safety is even greater. The film also stars John Cazale, Cindy Williams, Teri Garr, Robert Duvall, and a young and menacing Harrison Ford.

I don’t think that the story itself will seem all that fresh to contemporary viewers—this plot is one that has been around since the noir detectives were lurking in the shadows and romancing femme fatales—but there are a few things that made it so surprising to me. The first is the character of Harry; as a man so involved in breaching the privacy of others, he is practically a hermit. He has a phone in his apartment, but won’t let others know about it; he lies about his age and is surprised when someone finds out about his birthday; and he keeps his romantic relationships at such a surface level that they are doomed to fail. It is understandable that he feels so unable to connect with anyone as his entire career has blossomed on exploiting the ways that people expose themselves to others. All of this is illuminated by his deep Catholicism, which of course is built on the foundation of confession: his desire to relieve himself of the things that he knows about, and the ways he is complicit in dangerous dealings, is so complicated by his seemingly justified inability to trust. He knows that humans are unsafe when isolated, but he also knows that to be around others is to make oneself vulnerable (a fact which is driven home by almost every interaction he has with another person throughout the course of the film).

This deeply complex character is only made more interesting by Coppola’s skilled direction. As viewers, we are at times part of Caul’s complex web of surveillance, given god-like powers of access to knowledge and to other characters, and at other times we are as limited to Caul’s knowledge as he is and are trapped into his positioning, feeling likewise insecure and exposed. Coppola is at the top of his game here, and this film rightfully won the Palm d’Or at Cannes that year, only to be beaten out for the Best Picture Oscar by another of Coppola’s films, The Godfather Part II. The technology, of course, feels ridiculously dated, and the characters’ enthusiasm at some of the advancements they talk about might seem silly when compared with the gadgetry we are familiar with on a daily basis, but rather than making the film itself feel likewise silly, it becomes amazing that even the lower levels of surveillance access represented here can create the feelings of paranoia that pervade our contemporary experience. It becomes a bit of a time-capsule of the increasing awareness in the 1970s, including the growing understanding that technology provides access, and that the people and institutions we have been explicitly told to trust might not have our best interests at heart; continued exposure can have terrifying consequences. That this film doesn’t end where you think it might is a testament to its understanding of these issues.

It is actually kind of difficult to put this entry into the “avoid” category, because for many, many reasons, I actually love this movie. I just can’t in good conscience recommend it as anything other than “perhaps so bad that it comes back around to being good.” So, I guess rather than “avoid” I should be calling it an “approach with caution.” Morgan Hiller (a swoon-worthy James Spader, complete with 80s-era feathered locks) is a troublemaker, and his entry into an LA-area high school instantly pits him against a street gang—he interrupts them mugging a businessman at a bus stop—and tensions ensue. Things are made even tenser by the fact that Morgan is of course instantly attracted to the beautiful Frankie (Kim Richards), who is part of the gang. While his friend Jimmy (Robert Downey, Jr.) helps him navigate this new world, Morgan and Frankie develop a relationship that does little more than cause problems for everyone around them.

It doesn’t sound too bad on paper, but everything from the soundtrack and the costuming to the ways that the plot details shake out is hyperbolically ridiculous. A few examples: Morgan is such a bad boy that his family has been forced to relocate from suburban Connecticut, but we are actually not given any example of what he has done that is so bad, and of course, everything about him says “super smart and studious and clean-cut suburban rich kid,” so his “badness” becomes difficult to buy. He falls in love with Frankie for absolutely no reason. There is literally nothing that she does that could remotely be considered worthy of attention, until of course they start hanging out together, and they go to a club and she does an incredibly choreographed “seductive” dance number to the live band. Everyone in the club falls in love with her, of course. She is just that wonderful and enchanting (despite Richards’ questionable acting talents). This is just the start of the ridiculousity. It is terrible, so I clearly can’t recommend it. But for me personally, this is one where the stupid begins to cross somewhere into the sublime (probably right about the time when Morgan sits down to the piano to woo Frankie via song). If stupid and illogical isn’t your bag then step away from the Spader—you can’t say I didn’t warn you.