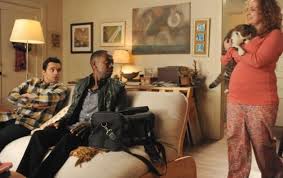 Call me crazy, but New Girl is picking up steam. It seems to finally be breaking away from the misguided Schmidt storyline, while not trying to completely forget about it. The crux of “Longest Night Ever” is based around Schmidt trying not to go crazy over a Coach/CeCe date all while Nick is trying to help Winston find Ferguson who seems to have jumped out a window. That paired with Winston’s new goal of finding a “human” woman to be with make for a delightful episode. I found myself smiling through the whole thing.

Maybe its because Nick and Jess’ relationship was simply an acknowledged part of this world (Jess accidentally insinuating they would get married made my heart sing a bit) rather than the main focus that allowed this episode to return to New Girl’s comfort zone of being a fun hangout show. Making interesting Nick/Jess relationship stories is going to take some work, but I was perfectly happy with Jess trying to wrangle Schmidt while Winston looks for Ferguson with an exasperated Nick.

Max Greenfield is basically perfect at playing a broken man, it’s much more appealing than Schmidt as the sitcom guy juggling two relationships. Schmidt is totally fine. He’s fine, he’s fine, he’s totally OK not having a problem at all – yep. Schmidt insists he’s OK with this, he wants to be a decent friend but he is obviously very NOT fine. From a peach cobbler he eats while piping hot to insisting coach try to take it slow.

The episode moves into hyper-drive when Winston returns from his night out and Ferguson breaks out. This splits up Jess and Nick. They are both outmatched. Jess is trying to keep Schmidt occupied complete with Dylan McDermott reference. Schmidt gets to the point where he starts motorboating his couch thinking it’s CeCe -- things are in bad shape. Jess decides to take him out for some failed encounters with new women. Schmidt’s a one-woman guy who has pretended to be a Barney Stinson-style ladies’ man.

Winston and Nick pick up Ferguson at a woman’s house and we’re introduced to hopefully someone we’ll see many, many more times. Winston and Bertie hit it off. I want more of her; she stole the episode. Everything from her disgusting allusions to bologna to her large amounts of stomach medicine made her seem like the perfect insane match for Winston.

Schmidt makes a mad dash to the Staples center to stop CeCe and tell her his feelings, but luckily Jess catches up to him, again repeating why he kind of needs to let her go again. All it takes to stop Schmidt – running with a box full of chocolate – is her car. To be more exact, the front of her car. After Schmidt begs her to hit him she actually goes through with it, and hey, it works!

After early-date nerves, CeCe and Coach figure things out, though I found their foibles more charming than funny, it’ll be interesting to see how their relationship progresses as they try to keep Coach in the fold. One thing’s for sure, the two really like each other as Schmidt and Jess see them making out. It’s a bit of a blow and I think the show may have some issues with Schmidt (who we want to really be with CeCe) trying to outdo Coach (who we’re ostensibly supposed to grow to like). It’ll be a tough balance to figure out.

I’d like to see more episodes like “Longest Night Ever” because, while it may not be the most in-depth character study the show’s ever done, it’s damn funny and that’s the name of the game. I’m glad there’s still a bit more than half a season left of New Girl, they seem to be figuring some things out.

- “Are those mouth pills or butt pills.” “Just one pill. Just one butt pill.”

- “That first class ass is gonna be sitting in coach tonight.”

-The Coach-CeCe date was kind of third tier to me. If their date had been a bit stronger (not in terms of results, but laughs/character) this episode may have been an A.

-Flashback of Schmidt saying he’s fine, then he proceeds to start to choke himself.

-Winston at bar: You ever wonder if someone in here has killed someone?

-Good lord darling, how big are your feet?

-Birtie also paints pictures of boats that look a lot like vaginas, maybe it’s just me. Also MORE OF HER please.