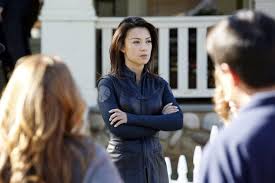 I think it may be time to recalibrate expectations on Agents of SHIELD. I have been growing increasingly angry at the show’s incompetence and inability to put together anything close to a logical narrative with anything even resembling actual characters. And “Repairs,” which was written by showrunners Jed Whedon and Maurissa Tancharoen, indicates that things probably aren’t going to improve anytime soon. If the people driving the narrative arc of the show think this is what it needed as we near the halfway point of its first season, well, this is probably about as good as Agents of SHIELD gets for the time being.

Let’s start with the few things I liked, because there should be at least one paragraph of positive feedback. The scenes of Tobias stalking the crew throughout the darkened plane had their moments. These are cheap thrills, tied into a story that is bad if I’m being charitable, but the middle act of the episode at least felt propulsive in a way this show almost never does. The discussions of faith were ham-handed and over-obvious, but they at least showed an attempt to turn the guest characters into more than just props. Yep, nine episodes in to one of the highest budgeted shows on television, and basically turning off the lights is the best thing I can say for Agents of SHIELD.

I can’t say I want the show to move toward more serialized storytelling, because what little of that they have to date is overwrought, dragged out, and terrible. I don’t care who Skye’s parents were. I don’t care about May’s trauma (the root of which we learn about tonight, and its as boring as you might expect). I don’t even care about Coulson’s resurrection. Yet the show doesn’t work as a procedural either, because no one involved seems particularly adept at coming up with case-of-the-week scenarios that don’t feel lifted from a middle schooler’s dream journal. Most procedurals draw their meat from displaying the procedure of the people they follow. Medical dramas show us doctors performing surgery or searching for a diagnosis. Police procedurals follow every step of the investigation (even as they are forced to cut corners to fit it into a single episode). Legal procedurals follow attorneys as they develop and argue a case.

What procedure are we even seeing on Agents of SHIELD? As a drama about the inner-workings of a global peace keeping task force, the show is very light on inner workings. Instead, we mostly watch as the team stares at 3D replicas until someone has an epiphany and the team rushes to stop the bad guys, who very often are not even evil, not that the show treats its morally ambiguous antagonists any different than its Norse Pagan Death Cultists.

Beyond that, the show has mostly abandoned Skye as the audience surrogate character in favor of turning that role into an ensemble piece, and the decision mostly makes everyone look like an idiot. Tonight, Simmons is shocked at the possibility of a telekinetic girl, even though last week she saw her friend possessed by rage from an ancient Norse staff and a few weeks prior to that she was infected with an alien virus. Add to that the fact that the actual solution is inter-dimensional teleportation and this serves to make one of our chief exposition machines seem like she’s out of order.

“Repairs” also tries to be a May episode, in the way “The Well” was a Ward episode, but where vague flashbacks underserved that story last week, the total lack of them undercuts May’s. The show continues to prove itself incapable of developing arcs for its characters, and resorts instead to having other characters tell us about arcs their friends are supposedly going through. In an episode about May’s foundational trauma, we see May open up about it for exactly one line of dialogue, and because we do not see her go through the mission that changed her or get her perspective on it, the episode flails around the idea of May as a character. You cannot make someone more three-dimensional in absentia, and having May glower while other people tell her story is just wildly ineffective from a dramatic perspective.

“So what if the drama doesn’t work?” you may be saying. If the show is funny enough or the action compelling enough, it isn’t necessary for me to be dramatically invested in these characters. I’ve talked before about how, in light of the total lack of compelling characters, this show could still work as a plot machine, but this week, which shows us a limp unrequited love story that barely bothers to hold together (Tobias blew up a gas station because a guy was being mean? Also, how does he see what’s going on when he’s not in this dimension? Maybe a hanging eyeball or something would have been helpful here, if also derivative of Angel’s resoundingly creepier hour “I Fall To Pieces”). And the attempts at comedy continue to get worse. This week, FitzSimmons decide to play pranks on Skye, one of which is to tell her a somewhat exaggerated version of a story they believe to be true (even if the version they think they know is also a little exaggerated). Make jokes about FitzSimmons being too awkward to be able to pull of pranks, and I’m with you. But expect me to laugh at the idea of May putting Whipped cream on Fitz’s hand while he’s asleep, and I’ll again wonder how much of this show is being written by middle schoolers.

Some of you are enjoying Agents of SHIELD a lot more than I am. I think the key difference is modulated expectations. I’d like to lower mine to the point that I could enjoy this show, but I think if I consciously admitted how low my expectations are at this point, I just wouldn’t spend 45 minutes a week on this drivel. This is a bad television show. I see very little evidence of it becoming a better one. As always, I’d love to be proven wrong, and I’ll be writing about this through the end of the season with my fingers crossed. But if this show has managed to reduce Clark Gregg’s charm to the point where I don’t even care about Coulson anymore (and seriously, remember how funny and roguish he was in the movies? I loved that guy, and couldn’t wait to watch his adventures every week. Where is he now? It seems like his trauma has just made him into a more boring version of the character, which is a pretty bad idea). If Agents of SHIELD can actively make me care less about the one character I had previous investment in, even as it works to make a bunch of paper dolls more interesting…well, I have concerns.

-Really glad the Bus has that magic room that can basically stop anything. Doesn’t matter the threat, nor its explanation. The Box is everything-proof.

-“People believe what they need to believe to justify their actions.” Think of the amount of times you’ve heard a variation on this line. Then rock yourself to sleep in a corner somewhere, muttering about clichés.

-Where is the plane even flying in this episode? I understand that, in order for it to crash, it needed to be in the air, but seriously, why is it in the air? They are on-sight to further investigate Hannah’s life and the accident. Why would they leave? Where are they going? This is the sort of thing the show barely even seems to consider. It just knows there’s a plane crash set-piece, and so the plane has to be in the air.

-“Can I please be the one to deliver the good news?” “That a non-corporeal mad man is hunting her?” “Again, I think the news would be better delivered by anyone else.”

-“Did she lose anyone in there?” “Herself.” UGH. SERIOUSLY. JUST STOP.