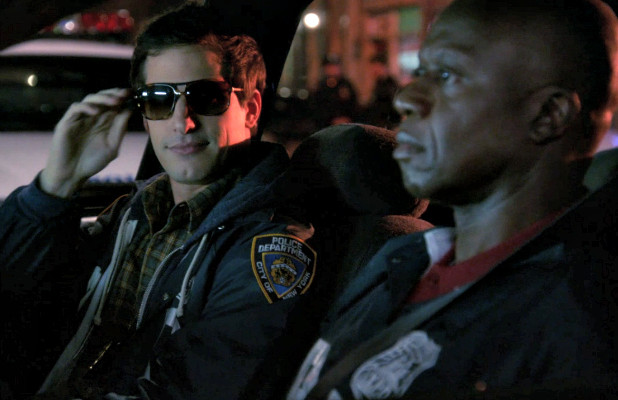 A few weeks back, I complained that the Halloween episode of Brooklyn Nine-Nine was chock full of holiday clichés and lacked even an original point of view. So it is odd, if not surprising, to find that “Thanksgiving” is in a lot of ways a carbon copy of that episode. The jokes here are a bit sharper, the characters slightly better drawn, but a lot of this has been done before, even on this show.

This time, it’s Peralta who hates the holiday, because he was often left alone on it, and once again, Boyle’s love of the occasion saves the day. Thanksgiving episodes are actually usually a good watermark in a show’s first season to see how things are progressing. Often, they give the show a chance to throw the ensemble together and display how well they have gelled. Brooklyn Nine-Nine has little to worry about on this front—the ensemble here has never been the problem. The supporting cast here is uniformly stellar, and they are supremely entertaining bouncing off each other.

No, the problem for the show right now is its leading man. Samberg’s performance is dialed way back up this week, and it did reach grating levels occasionally throughout the episode, though when matched with Braugher’s deadpan stoicism, it mostly works. I still find Peralta too over-the-top to connect with, and the more his backstory is colored in, the more it seems like the writers piling trauma on trauma in an attempt to explain the man-child monster they built the show around. Yet he and Holt make a hell of a team, especially when Holt is buying into the fake backstory Peralta provides, screaming at the family they are trying to interrogate about yellow sweaters and the one case he can’t solve. Braugher is more than just masterful here, he actually works to counteract Samberg’s excess and makes both of them look better in the process.

The lesson of the week felt just as shoehorned in here as it ever does, especially because it is the most obvious possible moral. Peralta learns he has a family, though some of the effect of this is blunted by the fact that he spent the entire episode away from them. Peralta ran from them, got told to appreciate them by Holt, and then just showed up to toast his surrogate family. It felt more like the skeleton of a character evolution than an actual one, and it robbed the episode of the chance to have Peralta learn to love his precinct by interacting with them. The show is getting better and better at giving the ensemble great material, but it still hasn’t solve the problem that Peralta barely fits in his own show. Samberg is constantly off in his own plots while all the fun happens at the fringes. “Thanksgiving” was an opportunity to change that, and Brooklyn Nine-Nine punted.

Gina is also being modulated here, taken down a few notches. I have never minded Peretti’s broadness as much as I mind Samberg’s, but its nice to see that she can be a bit quieter in her performance if need be. Gina is no less weird tonight, clip-clopping around on her high horse and trying to embarrass Santiago when she accidentally helps her, but it’s a smaller version of the character that seems less theatrical and more comfortable in her own skin. Then there’s Terry. Crews knows how to play both Terry’s size and his emotional range to the hilt. Terry can be a befuddles straight man, a wacky effeminate hulk, and an irrationally angry authority figure, and it all feels natural. Crews has comedic chops, and the show continues to give him a variety of ways to showcase them.

“Thanksgiving is roughly three-quarters of a good episode. The ensemble stuff works better and better as this season gets along, and with Holt riding shotgun, Peralta was much easier to tolerate. Brooklyn Nine-Nine hasn’t solved its Peralta problem, but if it eventually integrates him into the pseudo-family he is beginning to accept, this show could be a thing to behold in weeks to come.

-“I live alone. This is my stuff. I like quilts.” “Stop. Each sentence is getting sadder.”

-“Can’t spill food on your shirt if you’re not wearing one!”

“Happy Thanksgiving. Your apartment was easy to locate.” “Thank you so much. You look beautiful.”

-“I ate one string bean. Tasted like fish vomit. That was it for me.”

-“Oh, look at that, Boyle saves Thanksgiving!” “Does it say that?” “No. But it does say ‘Boyle believes obvious lie.’”

-“I was ordering a drink called a ‘Rough Night.’ It’s tequila with a nicotine patch.”

-“There are several compelling anecdotes, the font suits the tone…good work.”

-“I don’t know what you are…some strange, giant baby?”