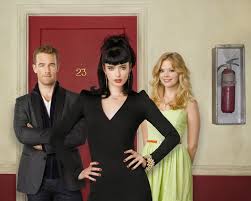 Let's face it: sometimes you need something to keep you busy between seasons of your favorite show, and for that, we turn to Netflix Instant. This bi-weekly feature will give readers a head's up on what's playing—from classics and deep cuts not to be missed, to new films and TV shows that have just arrived—so that you don't miss anything good. We'll even tell you if we see something particularly awful, so that you don't have to waste your time.

I haven’t tackled many of the television offerings on Netflix thus far because it is often difficult to sum up a show’s entire run in one short recommendation. For better or worse, Don’t Trust the B---- in Apartment 23 only lasted two very short seasons, but it is tremendous. Seriously. There are only a few weak episodes in this cancelled-before-its-time quirky show, and even they have their moments. Combine the strength of the writing and characterization with the fact that you can watch all 26 episodes (including 4 that never aired on ABC) in one sweat-pant-covered weekend, and you have a sure-fire winner.

The first thing you will have to do, though, is look past the basic description: sweet, optimistic, Midwestern June (Dreama Walker) moves to New York City to pursue her dream job of working on Wall Street, only to watch that job (and her perfect apartment) collapse within a matter of minutes. Desperate and penniless, she takes a position as a barista and finds herself rooming with Chloe (Krysten Ritter), a swindling, sailor-mouthed lush who tries to take her for those few things she has left. But little does Chloe know that June doesn’t give up too easily, and a very strange, and incredibly delightful, friendship blooms. What most people will see when they read this description is another version of 2 Broke Girls—female centric laugh-tracked light comedy propped up by tired race, class, and gender stereotypes—but that couldn’t be farther from the truth. Though Chloe and many of the New Yorkers around her see June as a push-over, June is so winningly drawn and stalwart in her desires to succeed that her optimism becomes endearing, rather than grating—and the ways that she is able to use that optimism to outsmart, or at least go head-to-head with Chloe, make her even more likeable. Chloe, on the other hand, is a brash, brilliant sociopath, whose twisted logic is almost crazy enough to make sense at times, and Ritter’s fully committed delivery is such a pleasure to watch that you will find yourself forgetting that if you were to encounter her in real life she would be downright terrifying. But here she is delightful, and Walker and Ritter make their battles so very fun to watch. I promise you, this isn’t just for the mean-girl watching—it is funny and smart, and not a girl-focused as it might seem at first, for those of you who are afraid that it might not have anything to offer you.

And it isn’t just June and Chloe who make this show so wonderful: the supporting cast comes in guns ablaze to round out the ensemble. Chloe’s best friend is James Van Der Beek (played ever so delightfully by James Van Der Beek) and, amusingly, this meta-skewering is the role that Van Der Beek was made to play. His image consultant and diva-tastic follower Luther (Ray Ford) spars with Chloe in the most wonderful ways. Pervy neighbor Eli (Michael Blaiklock) is damn delightful, as is the Liza Lapira’s Robin, whose obsession with Chloe gives a few episodes some great conflict, and thankfully isn’t over-used (she never turns into the Home Improvement Wilson that she could’ve). Rounding out the delight is Eric André as Mark, who starts out the show working at the Wall Street job that goes down in flames, only to end up working with June at the coffee shop. Mark becomes the grounding force in the silliness that pops up throughout all of the show’s encounters, and helps to keep June optimistic despite the cynicism that surrounds her—he is even funnier when dragged into the schemes. There are also a great number of guest roles from the likes of Dean Cain (also playing himself, hilariously), Michael Landes, David Krumholtz, Kiernan Shipka, the magnificent Busy Philipps, Frankie Muniz, Nora Dunn, and a brilliant final episode strongly featuring living legend Charo. Yes. Motherfucking Charo.

And the show hits the ground running—it doesn’t take long for it to find its stride, and it has one of the best comedy pilots I’ve ever seen. It never would’ve found a long livelihood on network television, however; despite June’s optimism, the show can be pretty mean spirited, which is only tempered by the fact that Krysten Ritter plays Chloe so cartoonishly that you find her hilarious, rather than evil, and the show doesn’t pull its punches with either nudity (seriously, Ritter spends at least 30% of each episode in some state of undress, and occasionally Walker joins her) or with the crassness of some of the jokes it throws at you, though of course, many of these are strongly implied rather than glaringly obvious. Highlights include Chloe’s takeover of People Magazine to upset the voting on the “Sexiest Man Alive,” James’ spot on Dancing With the Stars, Chloe and June clashing at James’ Halloween party, and that time that Chloe gives June a “relaxant” which causes her to black out for an entire day…only to find that blacked-out June is pretty successful at work.

Totaling less than 13 hours, this one is a breezy, brash, and utterly re-watchable mess that will have you giggling mean-spiritedly, and occasionally rooting for a psycho. It is one of those shows that took its mettle from the fantastic Arrested Development with regards to its joke structure and willingness to call back to earlier episodes. In some ways it is too bad that this one got cancelled when it did, because I for one would’ve loved to see where this show could’ve gone, though on the other hand, I’m not certain that it could’ve maintained this level of brilliance for much longer. So I’ll just relish that these 26 episodes are available to review instantly, and I think you should give them at least 3 episodes of your time. If you aren’t hooked by then, then I fear that there is just no helping you.

I didn’t have to tell you to stay away from this one, did I? You were smarter than I was, dear reader, weren’t you? I just couldn’t stay away, curiosity being what it is, and I just had to know if this was just plain bad, or if it was as enjoyably bad as the original. Someday I will learn that remakes are so very rarely worth my time; someday I will learn that they are almost always tepid, watered-down versions of their source, and if that source is already pretty bad, then why take my chances? Why think that a movie about a group of teenagers (Chris Hemsworth, Josh Peck, Josh Hutcherson, Isabel Lucas, Adrianne Palicki) trying to stop invading North Korean troops would be good? If it can keep you from wasting 93 minutes of your precious time, dear reader, then this is one bullet I’ll happily take. It isn’t even so-bad-it’s-good, it is just plain stupid. Avoid like the wind.