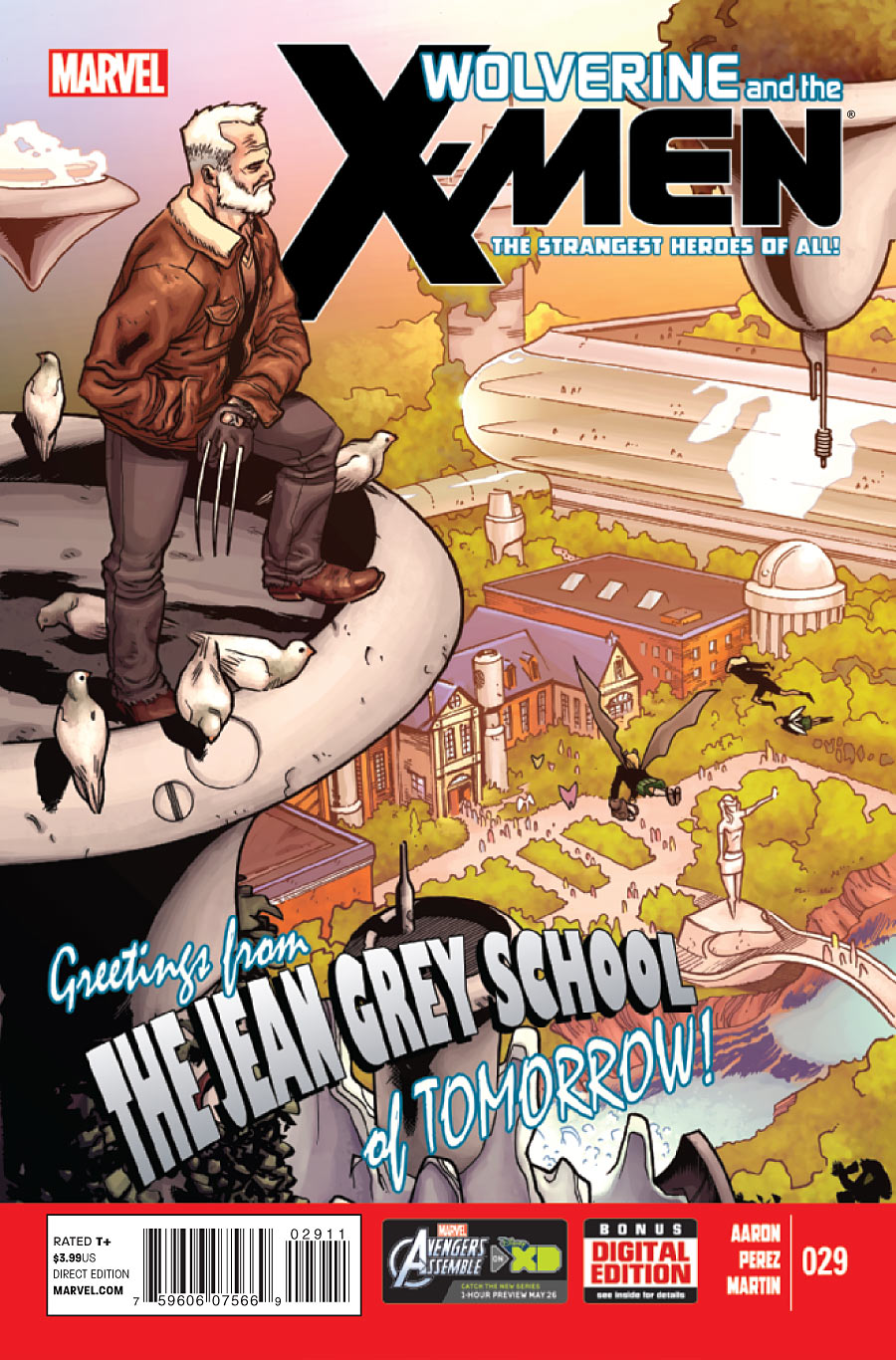 The year 2013 was a great one for comics, with the continued rise of Image Comics and the creator-owned wonders they produce counter-balanced by a particularly strong year for Marvel with the Marvel Now soft re-launch and DC continuing to do some interesting things in the New 52. Without further ado, here are my picks for the ten best books of 2013.

10. Wolverine and the X-Men

Over the course of this year, the diverse denizens of the Jean Grey School fought Frankenstein, braved the Savage Land, faced off against the Hellfire Club and faced the future in more ways than one, through both Battle of the Atom and one of the greatest stand-alone issues of 2013, which took a look at the Jean Grey school decades down the line with a beautiful hope for brighter tomorrows sandwiched into desperate times. Though much of 2013 seemed to be tying loose ends up, heralding the fast-coming end of Jason Aaron’s run, the book retained its sense of whimsy and its amazing ability to display both character breadth and character depth. Rare is a cast this large handled so adeptly, and even minor characters found moments to shine this year. Wolverine and the X-Men is still near the platonic ideal of an X-book—weird, wild, fun, funny, but with serious dramatic heft and emotional resonance to ground all of the high-flying, bamf-riding, dinosaur fighting madness in real emotions and character development.

2013 closed out the brutal Death of the Family epic and moved into perhaps Scott Snyder’s boldest decision yet: Zero Year, an origin story not just of Batman, but of the Gotham that needs the Dark Knight watching over it. The beginnings of Batman have been handled, and handled well, many times, yet Snyder smartly used the flashback to avoid some of DC’s dodgier editorial choices (no need for his book to tie into Villain’s month or acknowledge Forever Evil, since it currently takes place six years in the past) and to tell a wide-ranging story about a younger, rougher Bruce Wayne in a younger, more corrupt Gotham City. Zero Year has given us a vague origin for the Joker that managed to not spoil the character’s inherent mystery, a new rogue in Dr. Death, who is as terrifying as anything Snyder and artist Greg Capullo have yet created, and an incredibly strong Riddler story. Snyder has managed to make something tetchy at best into a must read, and created an origin that leaves me hoping this is still just the beginning of his run.

Absolutely the most unique and strangely gorgeous book on the shelves this year, East of West is a dystopic western set in an America that schismed after the Civil War and now includes several vastly different societies. Thrown into this are the four horsemen of the apocalypse who are playing out conflicts more ancient than anyone can possibly understand. Jonathan Hickman is known for his labyrinthine plotting, which is even now just beginning to unspool, but what sets East of West apart is how fully realized the world it exists in has been from the start. The shifting alliances and the political and social histories behind them are still becoming clear, but the bleak society in which this epic is beginning to take shape has been crystalized from its first page. Featuring stupendous art from Nick Dragotta, this is a book that will pull you into to a completely different world and rivet you there, month in and month out, as it starts to weave a much bigger narrative around you. There are dark days ahead for the characters in East of West, but the book’s future is incredibly bright.

This is the book so good I broke my rules to fit it on my list. As of the date this list will run, Sex Criminals has only published three issues (which makes it under my standard cut-off of five), and yet it has already proved itself to be one of the greatest books being published anywhere right now. Following Suzie and John, two crazy kids with the shared power of stopping time whenever they orgasm, and decide to use that ability to rob a bank, the book uses a silly high concept to mine real emotional truth. Its first two issues examine the sexual histories of Suzie and John, and serve as universal stories about the loneliness and confusion of a sexual awakening. Suzie is confused and ashamed as she tries to learn anything about female sexuality from traditional sources, and John immediately uses his strange gift as any adolescent boy would: to steal huge amounts of pornography and explore every possible sexual avenue. Sex Criminals uses its premise to examine our society’s attitudes towards sex and the ways that makes coming of age even more difficult, but it does so much more. This is a story about not just the mysterious power of the orgasm, but about the magical connection of love. It is a raunchy book with a store called Cumworld and an anal sex joke runner, but this book wears its heart on its sleeve like few others. It is, fundamentally, the sweet story of two cute, lonely people connecting, sharing their baggage, and finding themselves unburdened by someone willing to share the weight. At base, Sex Criminals is about love, and there are few comics being published right now that I love this much. It’s personal and universal simultaneously, hilarious and heartfelt, high-concept and fundamentally grounded in the mundane. It’s a story of breaking free from society’s restraints by just being yourself—even if yourself is a time-stopping bank robber—in a world that often wants you to conform.

In its second year, Fatale both expanded its scope and focused more intently on telling character-based stories within its world. The book retained its mix of noir and Lovecraftian horror, but spent much of the year telling stand-alone stories about Josephine and the lives she has touched, usually for the worse, over her centuries of life. The book deftly combines the grit of a noir story with supernatural dread that floats over each of Josephine’s interactions. From the woods of the Middle Ages to the attic of a house occupied by a grunge rock outfit in the early ‘90s, Fatale continues to tell the story of a woman with a powerful pull and the men who will stop at nothing to take that away from her.

The story of an unconventional family and the society that doesn’t understand, and thus, hates it, Saga makes the intimate epic and grounds its galactic scope in a completely relatable story about new parents struggling with standard problems like in-laws, babysitters, and constant pursuit by assassins and robots hell-bent on their death or capture. Brian K. Vaughn has a sense for character detail that quickly grounds every twist and alien locale, and Fiona Staples has an endless and distinctive visual imagination. Saga is science fiction and high fantasy, but at its best its just the story of a family weathering tough times, writ so large the conflict envelopes worlds and the spaces between them.

The most unconventional super hero comic being published right now, Hawkeye follows the adventures of Clint Barton when he is not being an avenger. That simple premise has exploded into one of limitless possibilities in the book’s second year, as it has expanded to include stories about Kate Bishop, Barney Barton, and all of the various women Clint has been involved with over the years. This year, Hawkeye did a Hurricane Sandy issue, an off-beat and deeply disturbing one-off starring its central villain, an issue in which Clint’s dog Lucky (or Pizza Dog, as he will forever be known) solves a murder, and several stories that perfectly balance street-level grit with Hawkeye’s hapless super-heroics. This is a funny book, but its also one suffused with its hero’s self loathing. It is experimental, but it also tells heartfelt stories. It can do anything, and somehow, miraculously, it manages to do just about everything well.

Thor lives in a very different world than most of his compatriots on the Avengers, and in Jason Aaron’s Thor: God of Thunder, we see just how strange and miraculous his day-to-day battles can be. This is a book that exists in its own fantasy realm but still feels palpably a part of the Marvel universe. And over the course of this year, we have seen the God of Thunder do battle against Gorr the God Butcher from three points in his timeline, and pull together a fellowship from across the Nine Realms to hunt down Malekith the Accursed as he wreaks havoc across the universe. Aaron can capture the scope of Thor’s near immortal perspective, yet he also never loses some of the central silliness that makes a regular trip to Asgard and the realms it rules such fun. That he can capture both tones and tie them so perfectly together makes Thor: God of Thunder the best showcase for its central hero in years.

A book about teenagers not exactly sure who they are, where they fit in the world(s), or exactly how much control they have over their own lives that also happens to be hilarious, shockingly contemporary, and gorgeous in its pop art sensibilities, Young Avengers is an immediately classic run from writer Kieron Gillen and artist Jamie McKelvie. Taking a cast of young and largely unknown superheroes and throwing them into an epic confrontation with an interdimensional parasite known as Mother, the book throws these kids into a potentially universe-effecting conflict with no safety net in sight. That it also manages to be a very funny and wonderfully affecting story about identity and heartbreak makes it one of the most fascinating and fantastic stories about youth and coming of age in years. Young Avengers will end its run soon, and it will go out as a near-perfect example of the potential of the form.

No book better mixed propulsive story-telling, expansive world-building, and detailed character work than Wonder Woman. In 2013, Diana has traveled to Olympus, met Gods New and Old, made some unlikely friends and lost some of the most important people to her. The book has also weathered two titanic status quo shifts without missing a step. Wonder Woman doesn’t just have one of the most compelling and nuanced leads in comics right now, it also has a stellar supporting cast in Diana’s growing surrogate family and in the pantheon of Gods who are both her actual relatives and her occasional adversaries. Wonder Woman ascended to become the God of War this year, with the massive costs that entailed, and now must balance responsibilities she does not want with principles of peace and justice that may be at odds with her role. The book hinges on Diana’s endless empathy, boundless hope, shocking resilience and enduring strength. Wonder Woman wasn’t just the best book on the shelves, month in and month out, in 2013, it was an absolute wonder to behold, a character reinvention that functions as the perfect exemplar of what the New 52 should have been, and that places one of the best characters in popular culture right now at the center of a world that is as vibrant, rich, and nuanced as the hero who defends it.