This week's question comes from our own Rachel, who asked,
If you could take a famous parent (real or fictional so, Martin Sheen or Jed Bartlett) as your own, who would you choose and why?

Don Draper. No wait, I'm not joking. Think about it. Don treats his kids pretty damn well. He's introspective enough to have the empathy needed for his children's mental health (like when he engages with Sally over her grandfather's death). He's not physically abusive in a time when there was no excuse not to hit your kids. He generally interacts with his children on their level, treating them like actual people. He's marrying a new woman because she's decent with kids. He attends school functions. He's got a sweet new pad that only hosts hookers some of the time. Not to mention some fringe benefits - you'd learn how to make drinks properly, and all that second-hand smoke is going to make sure your lungs get real strong. Compared to Betty, he's Bill fucking Cosby. But even without her as a comparison, he's probably a better dad than 90% of the sitcom dads on TV every day. 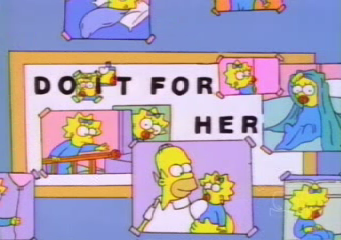 At first I thought this would be tough because I had an obvious answer that shouldn't work for this. But the more I thought about it the more it made sense. The answer of course is Homer Jay Simpson. Yes, he can be grossly incompetent as both a father and a member of the human race. Some have given the later seasons' version of Homer the title of "Jerk-ass Homer" where his sweet center seems to be missing. But Homer is a good dad who tries to do right by his family. Most importantly he is flawed which makes him endlessly more interesting than George Bush's preference of television father (Simpsons scholars will understand this). He has more great moments than I can list here. What sticks with me for this question are the little things he's done on the show that show how much he loves his kids. He bought Lisa her first sax, then a new one after it's destroyed, he quit his dream job so he can support a family of five and throughout the early seasons of the show he had regular heart to hearts with his son while playing catch in the backyard. Sure he might strangle Bart every so often. But he does it out of love. He's far from perfect but he's a hell of a lot of fun and has a big, doughnut clogged heart. Please excuse the John Mayer music, it's still worth seeing that Homer's a good dad.

My go to answer was used as the example for this question, which I guess means I can't have Jed Bartlet as my dad (this still depresses me sometimes).

My second choice for the role was Giles from Buffy, but I feel like every time a question is raised one of us on staff runs for the safety blanket that is Whedon (seriously, though, if "Standing" from "Once More With Feeling" doesn't scream ideal fatherhood to you, what does?). So (though this means that all of the men so far have picked father figures) I'm going to take a page from my esteemed colleagues (in this situation, esteemed means, "the assholes who beat me to responding") and go with a slightly odd choice for a parenting figure: The ghost of Nathaniel Fisher. If the Fisher clan, who any viewer of Six Feet Under must think of like members of their own family, is to be believed, Nathaniel was distant, aloof, and occasionally withholding during life, but after his death (in the show's excellent pilot, so I haven't spoiled anybody) the family sees him in a whole new light. The ghost of Nathaniel Fisher is an infinitely wise man, unburdened by stresses of every day life and free to dole out deep philosophical and emotional wisdom to his ever-needy offspring. Whether he is giving his widowed wife leave to find the happiness he never really gave her with another man, trying to let his son Nate in on the mysteries of the universe or just telling David to get back on the horse and get back to his life after he endures a traumatic experience, the ghost of Nathaniel Fisher is everyone's ideal version of a man who was no one's ideal father in life. I imagine he and I would have some pretty great conversations, that he'd give pretty fantastic advice both philosophical and otherwise, and that he would always remind me how much I was loved. What more can I ask from a father except corporeality?

Hands down, I would choose Keith Mars from the phenomenal and all too untimely demised Veronica Mars. Yes, Keith and Veronica's relationship was full of lies, dark secrets, and suspicion but in spite of all that, the love that these too had for each other was the emotional heart that drove the show. Keith was the kind of parent willing to walk through fire (literally) for his daughter. Their sharp and witty back and forth seems like it would keep family dinners and gatherings interesting. (I love the pony joke, it gets me every time).

Most importantly is the amazing detective skills I would currently posses if I was raised under the tutelage of master sleuth Keith Mars. I would love nothing more than to make some extra cash by tracking down missing persons and stolen property. The ability to pick locks, enact complex and brutal revenge schemes, and manufacture fake IDs and other documents all sound pretty awesome. And let's face it, what would be cooler than telling people that one of your hobbies is working as a private eye?

I totally would have picked Keith Mars, too! He's a great dad, though a tad overbearing at times. I'm glad to see someone else here appreciates his awesomeness as a parental figure.
In the interest of being original, then, I am going to pick Lorelei Gilmore. That woman is amazing. She works so hard, at a really cool job I might add, to provide for her kid, she feeds Rory the most amazingly terrible things and, as her genes are apparently superhuman, she also provided her daughter with astoundingly good looks. Lorelei is fun, silly, and has great taste in clothes, all of which makes her an ideal mother. And, while she has iffy taste in relationships, she loves Rory with everything that she has, and I personally believe that's the most important aspect of parenting. Also, Lorelei reminds me of my mom, so that could have something to do with my admiration for her.In any case, Lorelei is awesome, and I'd definitely be happy to have her were I a fictional character:

I actually totally support Michael's choice of Don Draper, but won't go as far as to second it officially because then I would feel really weird about how attractive I find Don/how quickly I would sleep with him if I happened to be a secretary at Sterling Cooper Draper Price or any woman in New York city with decent legs and a pulse. I'm also going to avoid the stereotypical answer of Angelina Jolie (make all the jokes about adoption you want, her kids are super cute, well dressed, and it seems they're really allowed to be themselves. Even though there are like 30 of them, there are always pictures of the whole crew together running all over the world, which I find really impressive).

As such, I think I'm going to go with Cameron and Mitchell from Modern Family. I have a lot of respect for gay parents, because having a child under those circumstances is never the result of an unfortunate biological accident spurred by too many bottles of wine or a faulty Trojan. It takes months, often years, of emotionally exhausting applications, interviews, and the like. Considering all of the unfortunate hardships gay couples face in this country, the commitment to have a child seems all the greater (you don't benefit from the immediate connection of shared genetics, which often seems kind of like a crap shoot, to be honest), and I'm also convinced that gay couples try even harder to be good parents because of the constant judgment they face because of the continued idiotic bigotry of the conservative right and entrenched suburbia. I come from a perfectly dysfunctional heterosexual marriage that ended in ugly divorce; I never had a stay-at home parent, my parents missed many a school play or choir concert, and I turned out pretty unbalanced, even though they're straight (who knew!?). Cameron and Mitchell give little Lily everything they can: she has a bedroom any little girl would love, they're attentive and caring in their own neurotic way, and I can't help but believe that, at the end of the day, two men who had to wade through so much to become who they are (two happy, successful, stable individuals in a loving, long-term relationship) will support their little girl in whatever way she needs.

Note from Rachel: Unfortunately, my brilliance is sometimes a finite resource. Send us your ideas for future installments of Random Pop Culture Question of the Week on twitter @reviewtobenamed (follow us here), or shoot us an e-mail at reviewtobenamed@gmail.com.

Recent Articles By the Staff