17
Oct
2011
The Vampire Diaries: Season 3, Episode 5
The Reckoning
Gaila
Sorry for the very late review, life has gotten a little crazy over here. I promise I'll be better in coming weeks"¦

This week's V Diaries"¦Oh my goodness. What a ridiculously intense hour of television. I was actually as apprehensive during the entirety of this episode as I used to get while watching the last four episodes of any given Buffy season. Vampire Diaries really is a special show.

So, the previous episode left us with the return of Klaus to Mystic Falls and, in true VD fashion, we don't have to wait long at all for him to find, and threaten Elena. Joseph Morgan was particularly scary this week, and did a fantastic job of conveying the real threat that Klaus is, to every single person in Mystic Falls.

But I should start at the beginning. The episode starts with Matt, oddly enough, and I'm slightly ashamed to admit that I'd basically forgotten about his existence. In a great creepy misdirect, Matt walks around the high school, only to encounter the rest of his classmates, setting up for "Senior Prank Night." I was worried for a second that the episode might focus heavily on Matt and on the high school, both fairly boring things, but I shouldn't have feared. The episode, which did feature a lot of Matt, was both terrifying and awesome, and there was absolutely no boredom to be had.

Klaus shows up, and immediately forces Tyler to drink his blood, and then kills him, giving Bonnie the time before Tyler's transformation into a zombie hybrid to figure out how to fix the hybrid curse. Klaus also threatens Elena, and then instructs Stefan to drink her blood when the time runs out, leading to an INSANE scene with Elena and Stefan, as she pleads for him to fight the compulsion, to use the power of their love to disobey Klaus. There was some really excellent acting in this scene, from both Nina Dobrev and Paul Wesley, and I was really impressed by the pure intensity and passion that both were emanating. Good job, guys!

I do find it strange that Klaus seems to be most angry by the fact that Stefan was lying to him, which is weird because he definitely forced Stefan to come with him, so obviously Stefan was lying, but also because it makes Klaus seem like such a little baby. Rebekah's question, then, about the underlying reason for the single-minded objective of hybrids being about Klaus being alone, is very interesting at this point. Is Klaus really that sad? And why wasn't he happy with the siblings he already had? I want more back-story! 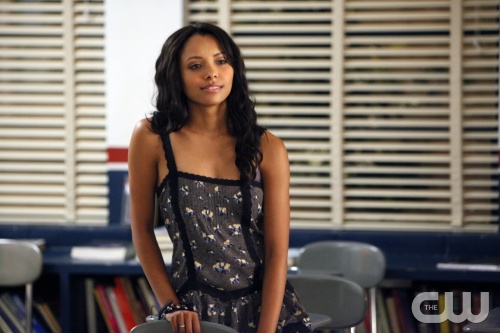 Elsewhere in Mystic Falls High, Bonnie and Matt struggle to figure out what to do about Tyler. Matt turns out to be the hero of this storyline, and of the episode, as he drowns himself in order to be resuscitated and thus able to receive messages from his dead sister. Obviously, this was a gamble, but I was impressed by his heroics. I was reminded of the constant references to Xander's humanity on Buffy, and how difficult being a normal in a town of supernaturals must be. And after awhile of being mopey about his role as the lone actual human, Matt really stepped up in this episode, and made a good argument for me liking him again. I'm really glad the creators of the show have figured out how to make him interesting.

While all of this was happening, Damon and Katherine, having kidnapped Jeremy, are working on solutions to their Klaus problem. I'm still very curious about Katherine's motivations for all this assistance, but the scenes between her and Damon were fairly entertaining, and I love the idea of her and Jeremy as a team. I think this will make for some very interesting stuff.

In the end, Stefan attacks Elena, Damon scares off Klaus with mentions of Michael, the vampire who hunts vampires, who Jeremy and Katherine have just located, Elena and Damon get some awesome moments of longing looks before Stefan, recently reprogrammed by Klaus to abandon all feelings, moves back into Salvatore Manor, Tyler becomes a hybrid, much to the worry of Caroline, and Matt has a chat with Vicki. So many things have happened, and I am in awe of the amazing storytelling skills of Kevin Williamson and crew. I love this show!

The only weak aspect of the show at the moment, for me, is Klaus's sister, Rebekah. While she does have some interesting things to say about Klaus's psyche, she's too jealous and petulant without being actually scary. Also I don't love the way she dresses.

Damon making out with Katherine in the car, only to throw her against the window and tell her she doesn't do it for him anymore was hilarious. And kind of mean.

Candice Accola does a fantastic job of projecting the extent of Caroline's heart and feeling for her friends, and especially for Tyler. All of her feelings are written on her face, and she breaks my heart in almost every episode.

Man, Stefan is scary a lot of the time.

I'm looking forward to Michael, the vampire who hunts vampires. But I wish Elijah would come back. I miss him.

Such a great episode! See you soon!