18
Sep
2012
Band of Horses:Mirage Rock
Mirage Rock
Darren
Bottom Line: An album that reaches out in several different directions, succeeding in about half. 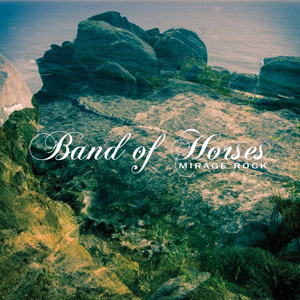 So this review might be shorter than my others, mostly because I haven't listened to Band of Horses too much before this album. I have their 2006 debut Everything All the Time, which I like a fair deal without having put too much time into absorbing it. They released two albums after this debut, which I never heard, so consider this a fairly "blank slate" review.

Mirage Rock seems to contain a mish-mash of Americana influences, going between country, folk, classic rock, and indie rock. While frontman Ben Bridwell's distinctive voice seems like it would be well suited for this venture, sometimes it works, sometimes it doesn't, but for the most part, it just doesn't come off as particularly groundbreaking.

The tracks that didn't win me over on Mirage Rock were those that really seemed to be going for a particular sound. "Slow Cruel Hands of Time" is a mellower acoustic piece that really recalls Neil Young, who also seemed to be the inspiration behind "Long Vows." Classic rock influences are more abound in "Dumpster World," which beats you over the head with its similarity to America (the band, not the amalgamation of states), although the song does have a powerful yet awkward rock-out midsection. While I was lukewarm towards these odes to particular musicians, they fare better than the attempts to capture particular genres. Second track "How to Live" sounds like every other modern country song I've heard in the past decade, and just isn't memorable. "Everything's Gonna Be Undone" has a more "genuine" folk sound, yet it just kind of sounds sleepy between two livelier tracks on the album.

In contrast, Mirage Rock's strengths seem to lie in its more straightforward moments. Opener "Knock Knock" caught me as a great first track, and even from my few past listens to Band of Horses I recognized that this was definitely their sound. "A Little Biblical" is one of the catchier indie rock-sounding tracks, and "Shut-In Tourist" has a nice guitar part and shows that the band is really good at using "ooohs" well (as odd as that sounds). "Electric Music" has good energy outmatched only by "Feud," the most straightforward rock song on the album. And while closer "Heartbreak on the 101" has a ballad quality to it, its ambition and Bridwell's vocal strength really make it stick out.

I realize that trying to have many different sounds and influences is a very ambitious task, and I do credit Band of Horses for trying what seems to be a lot of new sounds. However, creating a fairly eclectic mix can be tricky, and maybe the more folk and country tracks would have been better suited on an EP or their own album. Mirage Rock may not have made me a raving Band of Horses fan, but it did make me more eager to listen to the albums I missed.