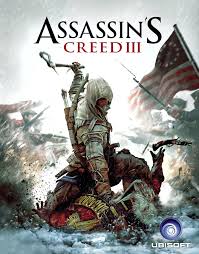 The thing Assassin's Creed III is best at killing is time.

ACIII, in a nutshell, is macrocosm of one of the series' iconic images: a hooded assassin, perched on a high locale overlooking the entire city's surrounding horizon. In previous Assassin's Creed games, the views were breathtaking but limited, as players could not access nor interact with everything they saw from the perchpoint. In ACIII, literally EVERYTHING seen can be accessed.

And while the main storyline of Assassin's Creed has never really been the driving point of the series, moreso being a convoluted backdrop that serves as a loose excuse to tie together the main events (and give us more reasons to kill things!),ACIII intensely refines what's been working for the series since the very beginning. The sidequests and Grand Theft Auto-esque capabilities of Assassin's Creed III more than make up for a mediocre storyline, making this game a very enjoyable experience.

Assassin's Creed 3 marks the end of Desmond's story as he, his father William, Rebecca, and Shaun finally come across the Grand Temple in a cave in New York. After using the Apple to access the temple, a timer for the world's apocalypse on December 21, 2012 triggers. In an attempt to further determine the secrets of the temple and stop Earth's doomsday, Desmond is sent back to the Animus, where he relives the events of Connor Kenway, half English, half Mohawk assassin from the American Revolutionary War who fights against the Redcoats when his home is attacked by European colonists. After some scuffles, Desmond learns that the means to stopping the world's demise lies with retrieving a medallion that will unlock the Grand Temple's inner chambers. Desmond has no choice but to relive Connor Kenway's life to determine the medallion's whereabouts.

The story at this point essentially becomes Connor Kenway influencing the entire outcome of the Revolutionary War by assassinating key figures in the war, like John Pitcairn (who at the time is leading the Redcoats in the Battle of Bunker Hill, easily the best moment of the game), and Thomas Hickey, Templar Assassin going after George Washington.

As previously stated, AC storylines are pretty weak, and really moreso an excuse to play out assassinating historical figureheads of the war. Connor Kenway isn't nearly as engaging as past playable assassin's like Ezio and Altair, and the story's first 3 hours or so is way too streamlined and boring (and for some of it you aren't even playing as Connor!). Fortunately for ACIII, Desmond's story, the without-a-doubt weakest aspect of the trilogy's storyline, has incredibly improved. His true purpose in the series is finally solidified, and his actions at the end of the game really left me yearning for more of this character. For the first time in the series, I can sit back and say that Desmond's plot was enjoyable, and not a shoe-horned excuse for the real draw of the game, murdering the @#$% out of people.

Once the game becomes more sandbox adventure-y, it dramatically improves. Forgetting the storyline and just futzing around during the Revolutionary War period in locales like Boston and New York definitely provides the most enjoyment. Granted, you can't do things as insane as in the Grand Theft Auto series, so don't expect to be able to ride your stolen Horse & Carriage off a cliff, sending the wenches you've just picked up on the streets to their deaths. But the things you are capable of doing, like hunting, navigating huge naval ships, hopping from jutting architecture to jutting architecture like an adept spider monkey, and shanking the random passerby always makes for a good time.

The amount of things Ubisoft's packed into this game unfortunately comes at a price. Technological ambition ends up simultaneously being ACIII's greatest strength and biggest downfall, as some things crammed into this game are awesome while others seem unfinished. Combat is still a slightly boring parry-and-counter system that tests your patience more than your actual skill, and every multiplayer mode other than assassination mode seems incredibly tacked on. Worst of all are the loading times, whose length is simply obscene. In the end though, these qualms in technical limitation are overridden by the sheer entertainment value of the game.

AND SPEAKING OF "IN THE END", I do want to touch briefly on the ending. Without spoiling anything, the ending's getting a pretty negative reaction, leading several to wonder why videogames can't do trilogies in terms of story. I get why some would dislike it: it's confusing, rips control away from the player at the apex of the story, and ends rather suddenly. But what should be noted is that while this trilogy is over, the ending provides a brilliant set-up for the next games to come in the Assassin's Creed series. It might be more apt to call Assassin's Creed 1-3 a drawn out prequel trilogy before the main events of what's to come- and trust me, with the success of the series, more is coming.

When all's said and done, the only okay storyline, technical qualms, and poorly received ending simply aren't enough to bring this mammoth of a game down. If you're looking for an entertaining way to kill time, there is no better game out there right now than Assassin's Creed 3.

*The kill animations in this game are BRUTALLY AWESOME. I don't think I've ever said, "I didn't know bones could break that way!" more in my life.

*Voice Acting in this game is pretty awful. Does one of the main antagonists towards the end have a lisp?? What is this, Kill Bill??

*Connor is a pretty uninspired character. Whereas previous Assassin's in Ezio were witty charmers with complex motivations, Connor is a stoic do-gooder whose motivation is pretty clichÃ© revenge.

*Haytham seems like the much more appealing character, and while it makes sense storywise as to why he wasn't the main playable character, I'd love to see him featured playable again in a DLC.

*Bunker Hill Battle= most awesome thing I've played in a videogame in a while.

*Is bad endings to videogame trilogies becoming a trope? Or is it simply a Canadian thing?

TOP OF THE FLAGPOLE