12
Nov
2012
Partners, Season 1: Episodes 5 and 6
2 Broke Guys / Temporary Insanity
Sarah
So we had a debate and then a hurricane and then a flaky law student, and that meant 3 weeks with no Partners reviews. But we're back with a two-fer so let's get to it.

To begin with, "2 Broke Guys": In the opening scene, Ali has problems with her contacts so she wears her glasses and Joe makes a naughty librarian joke. Great. Of course Sophia Bush looks amazing in glasses and I look like I have forgotten how to sleep and apply makeup. I'm too jealous to even mention that the giant clichÃ© that is the sexy librarian joke appearing in the first 30 seconds is a bad omen. But then, just as I was about to give up on Partners for real this time"¦something hilarious happened. LIKE SERIOUSLY HILARIOUS. Louis and Wyatt come in and Louis is wearing the same pair of glasses as Ali. Louis tells Wyatt that he got a pair of glasses for him too. Wyatt complains that glasses "totally change his look". Wyatt puts on the glasses and Louis exclaims that he is totally unrecognizable and Wyatt says, I told you so, LOIS." This of course is only funny if you know, which I do, that Wyatt is played by Brandon Routh who also plays Superman.
Excellent subtle break of the fourth wall Partners, and here I was thinking you could never be subtle.

The rest of the episode is mediocre. Wyatt says and does a few more funny things and Louis and Ali have a great dialogue poking fun at how stupid it is to call being gay a lifestyle, but all you really need to know about the episode is"¦ 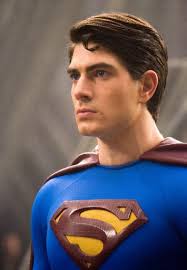 Seriously, those pictures are relevant. The Superman jokes were hilarious and the subplot of the episode was basically that Wyatt is super hot. But, Sarah, what was the main plot? Wellll"¦Joe and Louis have no architecture jobs, blah blah Louis almost asks his homophobic brother for help, blah blah Joe doesn't want to go back to their old architecture firm because he quit in the first place when they were going to fire Louis. In a totally unsurprising last second twist, they get a job, everything is fine and Wyatt is still so beautiful that Ali has to shake his hand instead of kissing him. Let's move on, shall we?

And on to "Temporary Insanity": OH MY GOD the horrible secretary appears to be gone"¦at least for two weeks according to the very unfunny opener about stereotypical secretaries and how great it is to be a gay man because you can say creepy things to women. So Louis and Joe have to find a new secretary and Louis suggests Wyatt because he is temporarily out of work because of a nurses' strike.
The horrible opener followed by a fast paced secretary debate between Louis and Joe really drove home the fact that Partners is pretty great when some combination of Louis, Joe, Ali and Wyatt are interacting, but kind of falls apart when ANYONE ELSE gets a line. For example, last episode introduced weird twin brothers who used to work with Louis and Joe and now work in their own business coincidentally in the same office. So far these twins have not provided any actual plot, like competition for architecture jobs, but they do say really creepy things in unison.

One thing Partners does not need to work on is the theme song, it is adorable"¦as are the Louis and Ali at yoga scenes. While Ali and Louis are at yoga, we find out that Ali is throwing a party to launch her jewelry line. Louis tries to hire her a cater waiter, but everyone knows you cant trust a hot guy you meet at yoga.

In office land, it turns out that Wyatt is an amazing secretary. This is not surprising in the least because Wyatt is amazing at everything. The first thing Wyatt does is clean and organize the office, including putting Joe's inventions into two piles: "already invented" and "bad idea." Oh Wyatt, you are hilar. Louis, on the other hand, is not thrilled with Wyatt's presence in the office. Wyatt order Louis boring healthy lunches, blocks inappropriate websites on his computer and quickly replaces Louis as the favorite gay of the offensive steno pool.

Louis realizes that having Wyatt in the office is a bad idea when a possibly even more offensive secretary than the original one and the weird twins pop up in Louis imagination. Yes, this actually happened. It was seriously the worst and most unnecessary minute I have ever seen on television, and I watched One Tree Hill through until the end AND a full season of 2 Broke Girls.

Louis asks Joe to fire Wyatt and Joe obliges. When Wyatt wonders why, Louis blames Joe. Wyatt, the sweetest guy in the entire world, tells Louis that the saddest part of being fired was not getting to spend the day with Louis. So Louis hires Wyatt back and hilarity does not ensue. The good news is that Louis owed Joe a favor for firing Wyatt, so Louis has to be the cater waiter for Ali's function. That could have been hilarious, but we didn't get to see more than one line because of the stupid secretary moments both real and imagined. Why can't Partners get it right?

-Saying a really mean thing and then throwing up your hands and saying "I don't want to fight" before the person you said the mean thing to has time to respond is a thing in Partners. This is a great tactic and I will be incorporating it into my life ASAP.